India Covid-19 numbers explained: Right now, India has been detecting almost 2.5 times more cases than it was doing during the September peak. But it is not because of any increase in testing. Now, more people are returning positive. India’s coronavirus cases numbers: One of the several remarkable features about this second wave of infections in India has been the very high positivity rate. Out of those who are getting tested, many more people are being found positive now compared to any previous time during the epidemic.

In the last one week, for example, more than 13.5 per cent tests have resulted in a positive test. The seven-day moving average of positivity rate has never been higher. Positivity rate is a measure of the spread of the disease in the community. A more widespread disease would lead to a higher positivity rate in the tests.

The current high positivity rate reinforces the possibility that the virus has spread at a much faster rate during the last couple of months, and infected many more people compared to last year. During the first wave, the positivity rate had peaked in the last week of July last year, and it steadily declined after that even when the positive cases continued to rise in August and September. At that time, the higher number of cases were a direct result of increased tests. Till most of July, India was carrying out less than five lakh tests a day. It was only towards the end of the month, that testing numbers began to rise rapidly and climbed to more than ten lakh a day by the third week of August. 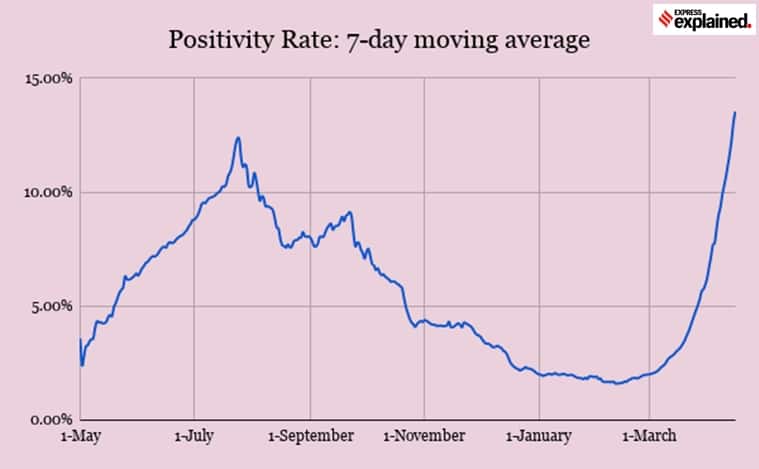 Right now, India has been detecting almost 2.5 times more cases than it was doing during the September peak. But it is not because of any increase in testing. The testing numbers are roughly at the same level as in September and October last year. But many more people are returning positive.

Maharashtra always had a very high positivity rate, over 15 per cent, for most of the epidemic, but several other states, including Chhattisgarh and Uttar Pradesh, that had relatively lower positivity rates last year — lower than the national average — are now in competition. In fact, the weekly positivity rate of Chhattisgarh is currently higher than even Maharashtra.

The high positivity rate could be because of increased contact between people or due to the circulation of a faster-transmitting variant of the virus. There is evidence that both these things have played a role. A new variant, which has emerged locally and was first noticed in the Vidarbha region of Maharashtra, has two crucial mutations that make it transmit faster and possibly also evade immune response. More than 60 per cent of the virus samples from Maharashtra, that were collected for gene sequencing, show this double mutant strain. This mutant has most likely spread to other states as well.

Aggressive testing is one of the most effective control measures with the health authorities, despite the fact that in the short term it results in an increase in the number of cases as well. This is because of the fact that as more and more people are identified and isolated, they are restricted from passing on the infection to others. But in the current situation the effectiveness of tests as a control measure has also been weakened because of the very high number of positive cases.

The country seems to have reached a saturation point in testing, with further increase looking difficult. As of now, between 14 and 15 lakh samples are being tested every day. This is similar to what was being done in September and October, but at that time the cases were much lesser, and the disease was probably spreading at a much slower rate.

The worst affected states, however, have been increasing their testing capacities. Maharashtra has been testing about two lakh samples a day, while Delhi has crossed one lakh tests per day mark. Chhattisgarh is also testing more than ever before, nearly 50,000 samples per day.

Iraqi forces begin operation against IS along Syrian border