India Coronavirus Cases Numbers: There are 6,76,514 active cases of coronavirus in the country at present, accounting for about 24.45 per cent of the total caseload, while the number of recoveries stand at 20,37,870. India Coronavirus Cases: India on Wednesday reported 64,531 new cases of Covid-19, taking its total tally to 27,67,273, according to data from the Union Health Ministry. With 1,092 people succumbing to the disease in the last 24 hours, the death toll touched 52,889.

There are 6,76,514 active cases of coronavirus in the country at present, accounting for about 24.45 per cent of the total caseload, while the number of recoveries stand at 20,37,870.

According to the Indian Council of Medical Research (ICMR), a cumulative total of 3,17,42,782 samples have been tested so far, with 8,01,518 samples tested on Tuesday. 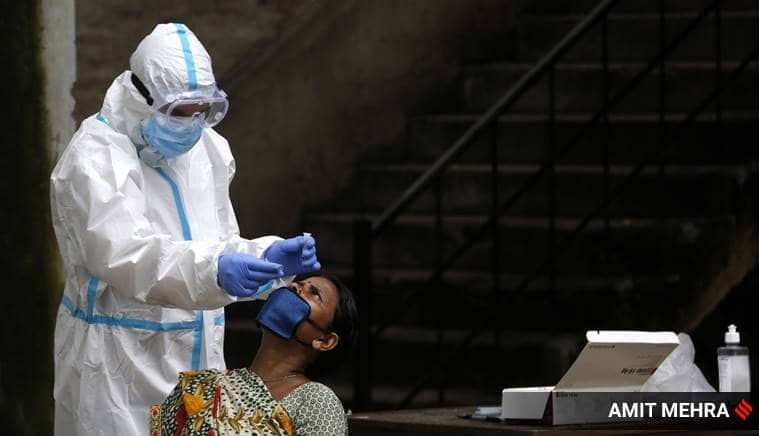 Union minister Sanjeev Balyan has gone into self-quarantine after he came in contact with UP minister Atul Garg, who tested positive for Covid-19, PTI quoted his aide as saying on Wednesday.

Balyan, the Union Minister of State for Animal Husbandry, Dairying and Fisheries went into self-quarantine in Delhi after he came to know about Garg’s infection on Tuesday.

Sixty-three-year-old Garg, an MLA from Ghaziabad, was admitted to a hospital Tuesday. Balyan had lunch with Garg at his residence in Ghaziabad.

Delhi recorded 1,374 coronavirus cases and 12 deaths Tuesday, taking the total case count to 1,54,741, while the death toll mounted to 4,226. At 11,068, active cases saw a slight increase from Monday. Of these, 5,351 patients are under home isolation. As many as 1,146 people have recovered and been discharged from hospitals, officials said.

The results of the second round of serological survey in the city, conducted in the first week of August, has suggested that 28.35% of the people tested have developed antibodies against the novel coronavirus. The previous serological survey carried out by the National Centre for Disease Control on a sample size of 21,387 showed that 22.86% of the people surveyed had been exposed to the virus. Follow Delhi Coronavirus Live Updates

State Surveillance Officer Dr L Jampa said 65 of the 133 new cases were reported from Upper Subansiri district, 22 in West Kameng, 16 in the Capital Complex region, eight each in Tirap and Changlang, three in Tawang, two each in Shi-Yomi, East Kameng and Papumpare and one each in Leparada, Siang, West Siang, Namsai and East Siang districts. “Twenty-nine paramilitary personnel – 17 in West Kameng, six in Changlang, three in Tawang and one each in Shi-Yomi, Leparada and Siang are among the new patients.”

Telangana on Wednesday reported 1,753 cases of coronavirus, taking the state tally to 95,700, PTI reported.
The death toll in the state rose to 719, with 8 more deaths in the last 24 hours.

A state government bulletin said the case fatality rate was 0.75 per cent, below the national rate of 1.92 per cent. As many as 73,991 people have recovered from the disease, while 20,990 remain under treatment.

Forty-five more people, including three army jawans, have tested positive for Covid-19 in Mizoram, taking the state tally to 860, PTI quoted a health official as saying.

Two of the new cases have no travel history. Fourteen truck drivers from other states are also among the new cases, the official said.

While 379 people have recovered from the disease, 481 cases are still active. The recovery rate in the state stands at 44 per cent.

West Bengal on Tuesday recorded 3,175 new Covid-19 cases, pushing the total number of cases in the state to 1,22,753, according to an official bulletin, reported PTI.

There are 27,535 active cases at present, the bulletin issued by the Health Department said. Around 92,690 people have recovered from the disease.

Meanwhile, Japan-based United Nation World Peace Association (UNWPA), a non-profit organisation, hailed chief minister Mamata Banerjee and her government for its handling of the Covid-19 pandemic in the state.

Trump told me to have polls rigged: Cohen

Women’s tennis has a new leader