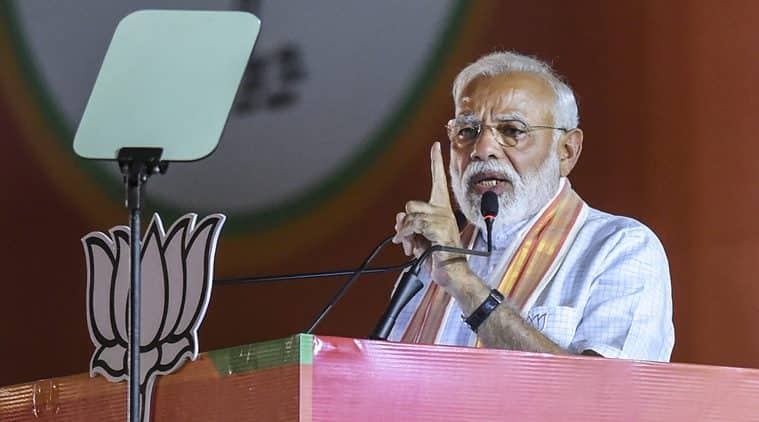 The national capital, which voted on Sunday, has an electoral symbolism that major political parties are keenly aware of. Hence, the no-holds-barred campaign rhetoric, which has set a new low in calumny and coarseness. Prime Minister Narendra Modi, who has targeted the Nehru-Gandhi family over the last year, opened yet another front when he charged late PM Rajiv Gandhi of misusing defence assets.

Addressing a pre-poll rally in Delhi, Modi claimed that in late 1987, Rajiv Gandhi had used INS Viraat as “a personal taxi” when “he (Gandhi) went on a 10-day leave with his family and in-laws”. The extrapolation was that the Italian relatives of Rajiv Gandhi had been allowed to board the carrier, thereby compromising national security. It was also alleged that INS Viraat had been pulled out of its operational deployment and tasked to cater to the extended “holiday” of the Rajiv Gandhi family.

Electioneering in democracies results in politicians taking recourse to a mix of fact, fiction and fantasy. The adage that poll campaigns are often about lies and damned lies has been refined, both in the US and India, the world’s oldest and largest democracies.

However, Modi’s allegation about INS Viraat has been stoutly refuted by the senior officials directly involved in that visit to the island territories. Two facts merit scrutiny for their long term implications. The first is that there were no foreign nationals on board the carrier as Modi had asserted. The second is that INS Viraat had not been pulled out of any operational task to be designated as a “taxi” and that the PM of the day was on an official visit to the naval ship. Prime ministers before Rajiv Gandhi and those who followed him, including Modi, have visited naval platforms and this is a major event for the service.

PM Modi has been accused by his critics of either being selective in recalling facts related to his political opponents or embroidering them to suit the electoral compulsion. Clearly, the Viraat episode is part of this pattern and his opponents may have cast the first stone in using the word “chor” (thief) in referring to Modi.

Two questions present themselves. What was the intent of the Modi team in making such a counter-factual assertion? What are the likely repercussions of such mudslinging among the political representatives?

The immediate electoral conjecture is a bogey was created in the Gandhi-Viraat recall to influence the Delhi and Punjab polls, but this also had the national media unearthing reports going back by 32 years. While retired senior naval and civilian officials (Admiral L Ramdas, Vice Admiral Vinod Pasricha and Wajahat Habibullah) confirmed that the Modi assertion was counter-factual, it also triggered a debate nationally about past high-level political visits to military units and the degree of transgression. Some junior officers also weighed in with their own versions. ‘Vacation Stories’ (IE, May 13) provides the most authentic recall.

Much of this borders on the irrelevant and inane in relation to the 2019 general election, but the potential for a corrosive fissure in India’s already brittle civil-military relations is discernible. The other danger is one of polarising the internal ethos of the Indian military along political-ideological lines.

The Indian military has internalised the principle of civilian supremacy — the former relating to the elected representative who mediates the allegiance of the soldier to the sanctity of the Constitution. The office of the Prime Minister is seen by the soldier as an exalted one. Thus, lowering the benchmark of uprightness and rectitude for short-term electoral gains over a military issue can damage the complex ozone-layer equivalent that separates the elected civilian apex from the military. Today, social media and cyber connectivity accords an immediacy and extraordinary democratisation of information. The cynical manipulation of this tool and its impact within the confines of the military is yet to be accurately assessed.

The second fissure is the potential for polarising the serving military personnel along nascent divisions already evidenced among the retired veteran community. The BJP as a party has sought to woo the soldier with mixed results. While it is the constitutional right of a retired soldier to engage in legitimate political activity, projecting one political party as being congenitally anti-national in the diversity that is India is to introduce a virus in the military eco-system, one that could become tenacious and cause irreparable damage to the democratic trajectory.

Post 1962 and the China debacle, Indian military personnel were encouraged to keep religion and politics out of their discourse and focus on professional matters while remaining aware of their domestic environment but yet steadfastly apolitical. The equipoise should not be damaged.