The comment is significant as it comes weeks after Tamil Nadu Governor Banwarilal Purohit refrained from taking a call on the premature release of AG Perarivalan, a convict in the Rajiv Gandhi assassination case. 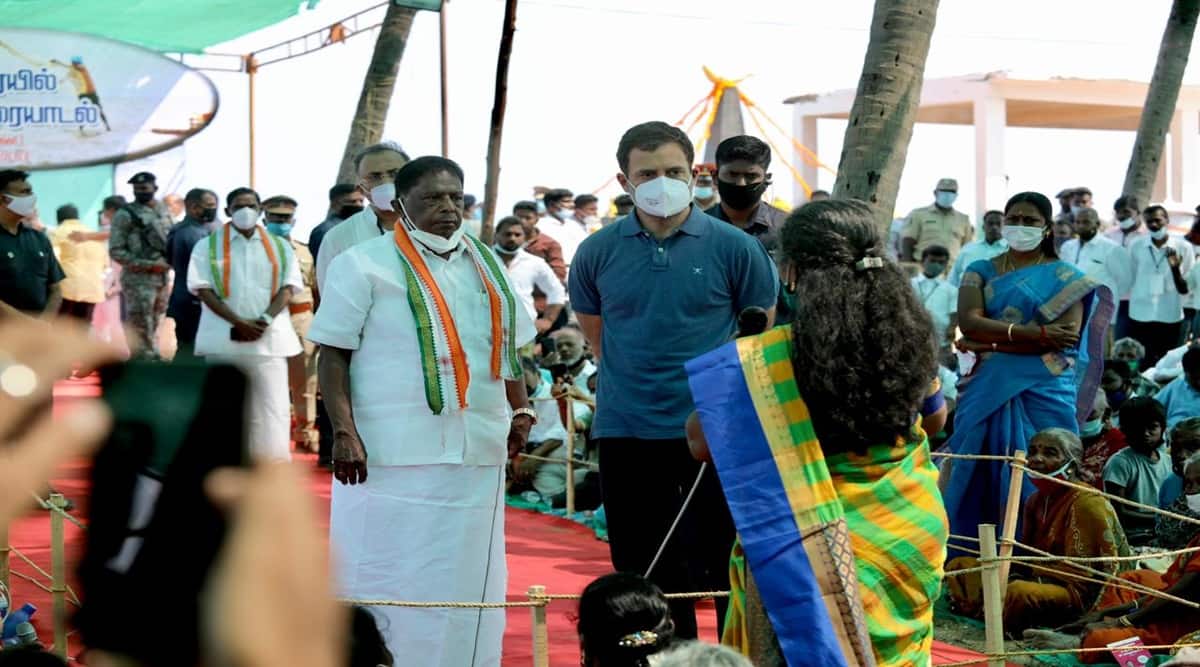 Congress leader Rahul Gandhi landed in Puducherry on Wednesday amid political turmoil, with his party on the verge of losing majority in the Assembly close to the next Assembly elections. However, he made no mention of it and sought, instead, to build an emotional connect with the locals by opening up on his father’s killers, saying he forgives them.

Asked what he thinks of the people who killed his father and former Prime Minister Rajiv Gandhi, Rahul said he doesn’t feel that he lost his father as violence cannot take anything away from anyone.

“I don’t have anger toward anyone. Of course, I lost my father and for me, it was a difficult time. It feels like someone cutting your heart out. I felt tremendous pain. But I don’t feel any hatred or anger, I forgive them,” Rahul said, adding that his father, former Prime Minister Rajiv Gandhi, is still alive in him.

The comment is significant as it comes weeks after Tamil Nadu Governor Banwarilal Purohit refrained from taking a call on the premature release of AG Perarivalan, a convict in the Rajiv Gandhi assassination case. The governor said the President was the competent authority to deal with Perarivalan’s request for premature release.

The overnight recall of Lieutenant Governor Kiran Bedi has set the stage for an intriguing political slugfest in the Union Territory, with both the ruling Congress-DMK combine and the Opposition BJP-AIADMK alliance level at 14 MLAs each in the 33-member House.

However, Rahul Gandhi, who is on a day-long trip to the UT, steered clear of the fast-changing political developments as he visited Solai Nagar and interacted with the local fishermen community. The fishermen raised issues they grapple with on a day-to-day basis, urging the Congress MP to address them.

Flanked by Chief Minister V Narayanasamy and AICC in-charge for Tamil Nadu and Puducherry Dinesh Gundu Rao, Rahul said that for him, Puducherry is a home away from home. He added that the fishermen are the ‘Farmers of the Sea’ and their rights should be protected.

“I have come to the land of Tamil people, I want you to talk to me in Tamil,” Rahul Gandhi told the locals.

Turning to demonetisation and the economic hardships for the working class in the wake of the Covid-19 pandemic, Rahul took aim at the BJP-led Central government, saying, “The current dispensation is going after small and medium traders as it wants all businesses to be controlled by the corporates. Our stand is completely different. We want to safeguard the interests of small and medium businesses as they give strength to our country. Be it demonetisation, GST or the way this government handled the Covid-19 crisis, they were designed to weaken our small-time traders. What Narendra Modi wants is for two or three of his corporate cronies to control our seas, what we want is to let lakhs of our fishermen rule the waters.”

He later visited the Bharathidasan College for Women where he was seen exchanging smiles and ideas with students. Urging the students to ask tough questions to their leaders as it is the only way a nation can move forward, Rahul also called on women to be financially independent. He said the society doesn’t like to impart lessons on financial independence to its women as the moment they understand the importance of money, they would look to earn a living for themselves.

“Educating women about money and explaining to them what it means to be financially independent are very important.

“You (women) should be able to earn your own money, you should be able to spend your money as that would make you independent. In our country, Lakshmi is worshipped as the goddess of wealth. How can we be a country that worships Lakshmi but doesn’t allow its women to be financially independent?” Rahul said.

On the arrest of climate activist Disha Ravi in the toolkit case involving the ongoing farmers’ protest, the Congress MP took a veiled dig at the ruling BJP, saying, “Throughout the country, people are being arrested for saying what they feel. I could be arrested for what I say here. A nation is built through the thoughts of its people. The thoughts translate into actions which, in turn, lend themselves to shaping the country’s character and destiny. If you are muzzling voices and scaring people into silence then you are destroying the nation’s character. No young man or woman in this country should allow themselves to be cowed down by anyone. Don’t surrender your power before anyone else.”

The Congress MP is scheduled to address the party cadres at a public meeting later in the day.

UP cousins burnt with tongs, fed human excreta for friendship with boys

TUESDAY TRIVIA! Srimanthudu, Kick, Arya and many other films that were rejected by Jr NTR and turned out to be blockbusters – check list here