US President Joe Biden and his Chinese counterpart Xi Jinping on Monday held their first in-person meeting in Bali, with both leaders underscoring the need to manage their differences and prevent a conflict, amid Beijing’s coercive military posturing against Taiwan and in the strategic Indo-Pacific region. 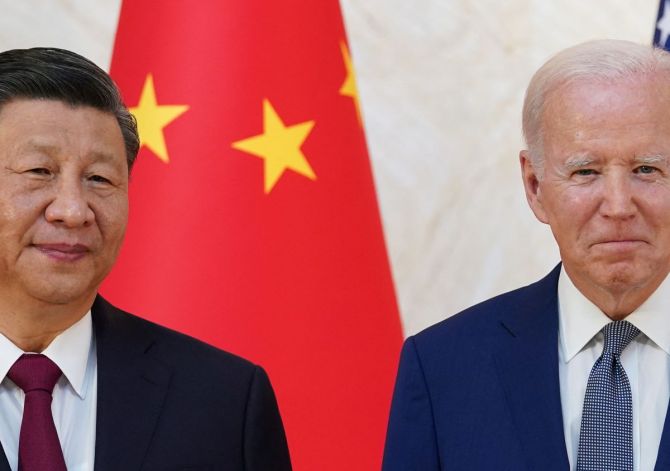 The high-profile meeting between Biden and Xi, that lasted nearly three hours took place on the margins of the G20 summit in the Indonesian city. Both leaders shook hands and greeted each other with smiles, standing in front of a row of US and Chinese flags.

This is their first face to face meeting after Biden became president two years back. They have, however, talked on phone — and as vice president earlier Biden had been in touch with the Chinese strongman.

The two leaders did not wear masks.

Biden raised human rights issues in Tibet during his talks with Xi Jinping at Bali in Indonesia on Monday ahead of the Group of 20 Summit with concerns about Beijing’s practices in Xinjiang and Hong Kong also figuring in the meeting, reports ANI.

He said the ‘one China’ policy of the US has not changed but Washington opposes any unilateral changes to the status quo by either side.

“President Biden raised concerns about PRC practices in Xinjiang, Tibet, and Hong Kong, and human rights more broadly. On Taiwan, he laid out in detail that our one China policy has not changed, the United States opposes any unilateral changes to the status quo by either side, and the world has an interest in the maintenance of peace and stability in the Taiwan Strait,” the statement said.

“He raised US objections to PRC’s coercive and increasingly aggressive actions toward Taiwan, which undermine peace and stability across the Taiwan Strait and in the broader region, and jeopardize global prosperity,” it added.

“He again underscored that it is a priority for us to resolve the cases of American citizens who are wrongfully detained or subject to exit bans in China,” the statement said, according to ANI.

In his opening remarks, Biden said that he was committed to keeping the lines of communication open with Xi.

“I’m committed to keep lines of communication open between you and me personally, but our governments across the board, because our two countries have so much that we have the opportunity to deal with,” he said.

“As the leaders of our two nations share responsibility in my view to show that China and the US can manage our differences, prevent competition from becoming anything even near conflict and find ways to work together on urgent, global issues that require our mutual cooperation,” he added.

On his part, Xi said the world is paying attention to the high-stakes meeting between him and President Biden.

“Currently the China-US relationship is in such a situation that we all care a lot about it because this is not the fundamental interest of our two countries and peoples, and it is not what the international community expects (from) us,” Xi said.

“As leaders of the two major countries we need to chart the right course for the US China relationship. We need to find the right direction for the bilateral relationship going forward and elevate the relationship,” he added, speaking through a translator.

“The world expects that China and the United States will properly handle the relationship. Our meeting has attracted the world’s attention, so we need to work with all countries to bring more hope to world peace, greater confidence to global stability and strong impetus to common development,” Xi said.

The Chinese leader said he was ready to have a ”candid and in-depth” exchange of views with Biden on issues of strategic importance on China-US relations and on major global and regional issues.

Later, the White House said Biden and Xi spoke candidly about their respective priorities and intentions across a range of issues.

“President Biden explained that the United States will continue to compete vigorously with the People’s Republic of China, including by investing in sources of strength at home and aligning efforts with allies and partners around the world.

“He reiterated that this competition should not veer into conflict and underscored that the United States and China must manage the competition responsibly and maintain open lines of communication,” the White House readout said.

The two leaders discussed the importance of developing principles that would advance these goals and tasked their teams to discuss them further.

Xi arrived in Bali on Monday afternoon, a day after Biden’s Air Force One landed in Bali where leaders are gathering for the annual Group of 20 summit of the globe’s major economies — the advanced nations as well as the emerging economies.

Bali is the last stop in Biden’s three-nation trip, which included Egypt for the environment summit COP27 and Cambodia for the ASEAN Summit. In Phnom Penh, he indicated his country’s solidarity with ASEAN nations, several of whom have conflicts with an overbearing China.

He said these countries and the US can together defend against ”threats to rules-based order and threats against the rule of law” — a reference to China but without naming that country.

Relations between the two countries took a nosedive after US House Speaker Nancy Pelosi’s visit to Taiwan in August. China saw it as a provocative US move in support of the island which governs itself, but which Beijing says must return to it someday.

After the Pelosi visit, China held a series of live military exercises around Taiwan to make its concerns clear. Biden has indicated that the US would come to Taiwan’s aid if China invades, a stand that has exasperated tensions.

China claims nearly all of the disputed South China Sea, though Taiwan, the Philippines, Brunei, Malaysia and Vietnam all claim parts of it. Beijing has built artificial islands and military installations in the South China Sea. China also has territorial disputes with Japan in the East China Sea.

The South China Sea and the East China Sea are stated to be rich in minerals, oil and other natural resources. They are also vital to global trade.

Although the US lays no claims to the disputed waters, it has challenged China’s growing territorial claims in the South China Sea by deploying warships and fighter jets to assert freedom of navigation and overflight patrols in the strategically vital region.

Both Biden and Xi entered the meeting — held at a hotel in Bali’s Nusa Dua — stronger at home.

Biden’s Democratic Party has done better than expected in mid-term elections, and Xi has secured a tradition-breaking third term as the head of China’s Communist Party and is being placed by many in the same league as Deng Xiaoping.

”His circumstance has changed, to state the obvious, at home,” Biden was quoted as saying to reporters before his Bali arrival.

And about his own, he said, “I know I am coming in stronger.”