Kiran Nadar, 68, on her art collection, 10 years of KNMA, and representing India at the Venice Biennale 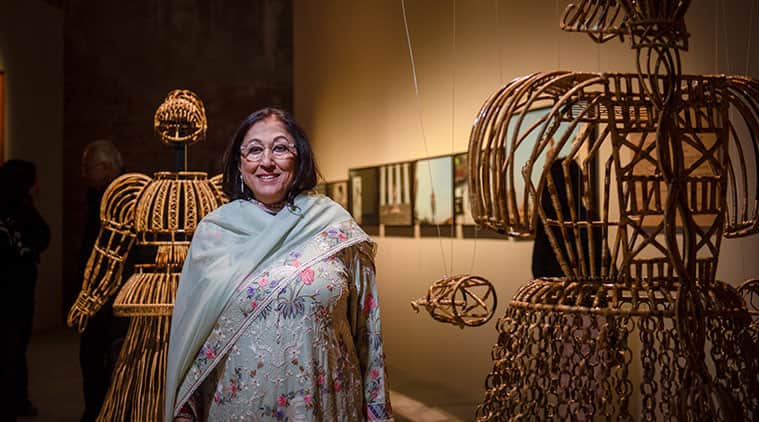 For the India pavilion at the Venice Biennale, how did your partnership with the Ministry of Culture come about?

The Confederation of Indian Industry first started liaisoning with the government. It was decided that the government would sponsor the pavilion and rest of the expenses would be paid by Kiran Nadar Museum of Art (KNMA), which has also done the curation. The government had picked the theme “150 years of Gandhi”. We chose to showcase the influence he has had and not put forth a graphic description of Gandhi with the glasses, charkha and Khadi. We are showing artists, who, in some ways, exemplified his philosophy. He had spoken to Nandalal Bose to do the Haripura posters showing everyday India for the Congress; (MF Husain’s) Zameen has several elements of India; Shakuntala Kulkarni has looked at another aspect of his philosophy (relationship between art and artisan), and GR Iranna has used the padukas.

You have chosen David Adjaye to design the recently-announced Kiran Nadar Museum of Art and Cultural Centre. What is your vision for it?

An international architect would have more experience of museum-building, which has special needs and attributes. We will not be reinventing the wheel. We are 90 per cent certain about the space and hope to start building the museum by the end of this year. It will take around three years. This will be an art museum with venues for dance, music and creative education. The existing museums might be used as project spaces.

Your collection, built over 30 years, boasts of SH Raza, FN Souza, among others. What were the early works you bought?

We (she and husband Shiv Nadar) had commissioned a work to Husain. When he made two, we bought both — one from the Mother Teresa series, and the other, with a cow and baby Krishna, from Mahabharata. I really liked Manjit Bawa’s drawings of the homeless in The Illustrated Weekly. I requested him to amalgamate them into paintings, at his Garhi (Delhi) studio, before we went to his friend’s barsati, where he played the tabla as she sang.
I bought a 7x7ft Rameshwar Broota monochromatic male nude, The Runners. When I told my husband about it, he was horrified as our daughter was very young and my mother-in-law spent a lot of time with us. I asked Shiv to accompany me to the artist’s studio, to tell him that we were withdrawing the offer, but as soon as he saw the painting, he said, ‘We’ve got to have it.’

What prompted you to start KNMA, which will complete a decade in January?

As I got acquainted with art, I started enjoying it. If I liked a work, I would buy it. I began putting up works at various places, at our home in California, in Shiv’s office. Soon, works started going into storage. I wanted others to look at them, and building a museum seemed like the right thing to do. Though, if I knew how much work it entails and the long-time commitment, I don’t know if I’d have gotten into it. At that time, my collection was not this big. To a large extent, I built the collection after I built the museum.

Did you start purchasing differently after you set up the museum?

Yes. I started acquiring works of those artists who were not in my collection but who were very important in the Indian context. For instance, I did not have photographic works, but now I have a collection, including several works of Dayanita Singh. Purchasing installations is also museum-driven because in homes we don’t really put up huge installations. Size is not a constraint anymore, the work is important.

You once mentioned a gap in your collection vis-à-vis the Bengal School and Indian miniatures. Does that still exist?

Not anymore. I took that as a mission and went looking for good Bengal works. I have recently acquired a huge Nandalal Bose archive that was being sold by (his grandson) Supratik Bose. I have also acquired a collection from private hands, which has Nandalal and artists such as Jamini Roy. I also have a lot of Ganesh Pyne, Somnath Hore, Ganesh Haloi, and all the Tagores. I have also built a sizeable collection of miniatures, from the Pahari and Kangra School. I don’t yet have Mughal miniatures.
I don’t think there is a real gap that exists in the collection but I do have to build on areas. I’m still drawn to the Bombay Progressives. I have several works by them, but if there is a good work, I still tend to go for it.

I’m also interested in collecting more of folk and tribal art. I need to educate myself more about the work of contemporary artists. Now I’ve got someone in charge of bringing me newer artists. Long ago, I would visit artists at Garhi. I remember purchasing hemp works from Mrinalini Mukherjee there. I wish I had bought more, no one was buying them then.

How would you describe Indian art collectors?

Very few people in India build large collections. People usually buy for their homes. Not many look at art as an asset. The homes might be beautiful but the art is very substandard. Moreover, people keep away from art that is disturbing or that others are not drawn to, they want pretty pictures. There is a need for art education in India. We are working with schools to get more children to the museum, involve them in activities. The #chalomuseum campaign is focussed on encouraging the public to visit their local museums.

Could you recall bidding for Saurashtra in 2010? Why do you prefer phone-bidding?

When you are in the room, you are conspicuous. It’s better to keep a little anonymity. I was in the room (at Christie’s, London) when I bid for Saurashtra. It was an important Raza work that I thought the museum should have, but I didn’t realise I’d have to pay so much (a record-breaking Rs 16.4 crore). Later, when it was on display at KNMA, Raza came to see it. He was on a wheelchair. He (looked at) his work, and did pranam. That was very touching.

Celebrating the city and its communities

Polambadi will bridge gap between farmers and science, says official

US hikes tariffs on Chinese goods, China says to strike back