These are Ponzi schemes in which Indian investors have lost millions of rupees. To curb this menace, the government tabled the ‘Banning of Unregulated Deposit Schemes Bill, 2018’ in Parliament recently.

While the punitive provisions of this legislation will definitely act as a deterrent, investors on their part too need to be able to spot these schemes and steer clear of them.

Spot a Ponzi scheme and avoid it; Ponzi schemes have a few characteristics that the informed investor can spot easily.

The first sign is the promise of an abnormally high rate of return.

“If today a bank gives you 7 per cent return, and a scheme promises 18 per cent, get suspicious,” says Arvind A Rao, a Sebi-registered investment advisor.

The second sign is the promise of ‘guaranteed’ returns.

Three, if the salesperson makes the investment process appear convoluted, be warned.

Four, if the agent does not explain the investment risks upfront, stay away. 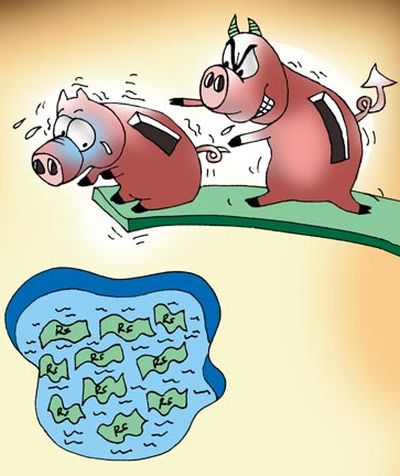 Ask the sales agent which regulator the money-raising entity is registered with.

“If it is a genuine entity, the salesperson should share the registration licence and number,” says Rao.

Invest with players who have been around for a long time.

“If a company has been around for 20, 30 years, then the probability of it running a scam is lower, while a two-three-year-old company can well turn out to be a fly-by-night operator,” says Mumbai-based financial planner Arnav Pandya.

He also suggests investing only with well-known entities and avoiding small, locally-operated ones.

Regulatory-judicial lacunae: The key legal provisions that come into play when such scams occur are those in the Indian Penal Code pertaining to fraud (and certain other laws administered by the Securities and Exchange Board of India, or Sebi).

But proving fraud can take a lot of time, and the penalties were also not high, which meant that the existing deterrents are inadequate.

The Reserve Bank of India only regulates entities like banks and non-banking finance companies.

Sebi has regulations for collective investment schemes, but these do not cover cooperative societies.

Many issues fall under the purview of central legislation while others are state subjects. Such regulatory cracks have allowed miscreants to get away.

Comprehensive legislation: A key strength of the proposed legislation is its sweeping nature.

If any entity raises money but fails to repay investors the principal and interest due to fraudulent causes, it will be held liable.

Earlier, the concerned authorities had to initiate enquiries, carry out investigations, and go through an elaborate process. In India the judicial process is slow.

Those being prosecuted find ways to delay it further. Hence, it takes a lot of time to bring culprits to book.

The proposed legislation will allow the competent authority being set up in the states to attach assets that have been acquired through unregulated deposits.

“The authorities will not have to wait until a fraud has been detected or money has been squandered away, which makes recovery difficult,” says Joseph.

“The competent authority will be able to act the moment it receives information. It will be able to ask for reasons, get statements of account, and then proceed to pass attachment orders so that no further funds are raised,” Joseph adds.

Even if there is siphoning of funds to related parties, this legislation allows the special court to go to the entity to which money has been transferred.

It can ask the concerned party to show cause why it shouldn’t attach such transferee’s assets of equivalent value.

The recipients will also have to show that they paid fair value for the assets acquired in such related-party transactions.

Finally, both the financial and incarceration-based deterrents of this legislation are much higher.

Draconian in character: One concern voiced by stakeholders is that the government needs to fix the flaws in the judicial system by empowering it with adequate resources, improving infrastructure, appointing enough judges so that litigation moves at a faster pace, and providing more resources to the law and order mechanism to carry out investigations properly.

Instead, the government compensates by formulating more draconian laws.

“To my mind, attachment and seizure of assets, or penalising without concluding a proper and fair trial is draconian. Such laws can sometimes be used to harass people instead of achieving their objectives,” says Joseph.

Another concern is whether those presiding over these special courts will have the necessary knowledge to understand complicated financial issues.

Many Western countries have effective policies for incentivising and protecting whistleblowers.

Experts say such a policy should have been incorporated in this legislation.

To expect the competent authority to be able to find out in which remote corner such schemes are operating is unrealistic.

The enactment of a new, harsher law may not end this menace entirely.

“Since the deterrents are stronger, people will think twice before starting such schemes. But there is a possibility that these operations may go underground. There may be no written documents, and they may be run entirely by word-of-mouth, which will make them harder to track,” says Ramabhadran Thirumalai, assistant professor of finance at Indian School of Business.

To be effective, he says, these courts will have to dispense faster justice. He also adds that legislative measures need to be supplemented with financial literacy initiatives.