The village got Rs 3 lakh as MPLAD grant, which they used to build boundary walls, a shed and toilets at the common cremation ground. The old cremation ground set aside for Dalits was closed and converted into a park. 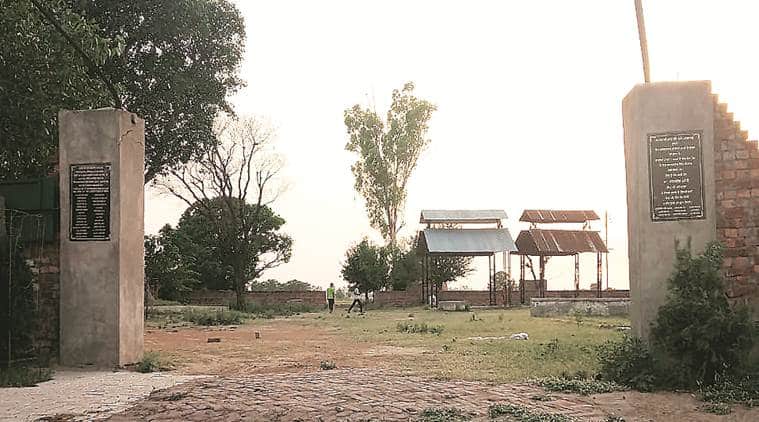 “Manas ki jaat sabhe eke pehchanbo… Saariyan jaatiyan tey dharman de log iss swaragdham vich sanskaar kar sakde han (Recognise mankind as a single caste… People of all castes and religions can perform the last rites of their near and dear ones here)…,” reads the stone plaque outside the cremation ground at village Gobindpura in Nabha tehsil of Patiala district of Punjab.

In Punjab, the land of Sikhism whose Gurus denounced casteism and popularised concepts such as the langar (community kitchens where everybody sits together and eats), caste remains a reality whose-vice-like grip often follows people to their grave, with several villages setting up separate cremation grounds for Dalits. However, that’s slowly changing in villages such as Gobindpura.

Gobindpura is one of 144 such villages in Patiala district that have done away with caste-based cremation grounds, a change that was ushered in after its former Lok Sabha MP Dr Dharamvir Gandhi used a simple carrot-and-stick approach – villages that agreed to end the system of separate cremation grounds were given MPLAD funds for renovation and other development work at cremation grounds; those that resisted the change were denied the funds.

Gandhi, who the won the 2014 polls on an Aam Aadmi Party (AAP) ticket and was later suspended from the party, contested the 2019 election on the ticket of the Punjabi Ekta Party but lost to Preneet Kaur of the Congress .

Says Gurdarshan Singh, former sarpanch of Gobindpura and a Dalit, “Earlier our cremation ground was very far from the village, almost 2 km away in the fields. There was no drinking water facility there, no proper road. Now we cremate our dead at the same ground used for people from the general category — this one is easier to access and has all facilities such as water, washrooms, etc.”

Gurdarshan Singh says the change came with other positives. “Now everyone stands together at the time of grief. No one talks about jaat-paat (caste) and both SC/ST and general category residents attend each other’s cremations. We also visit each other’s homes,” he says.

Initially, he says, the elderly in the village, even among the Dalits, objected to the idea. “They said this was unheard of. How can it be possible, they said, but the younger generation prevailed upon them. After all, who would want to lose development funds because of a practice that holds no relevance now,” says Gurdarshan Singh.

The village got Rs 3 lakh as MPLAD grant, which they used to build boundary walls, a shed and toilets at the common cremation ground. The old cremation ground set aside for Dalits was closed and converted into a park. Of the 1,050 voters in the village, around 250 are Dalits.

At Ablowal, another village in Patiala that switched to a common cremation ground, there has been another key change – two Dalits are now members of the management committee of the village gurdwara.

Baljinder Singh Zaildar, president, Swaragdham Welfare Society, Ablowal, which manages the cremation ground and allied services in the village, says earlier, there were two grounds — one for the general category and other for Dalits managed by the Harjian Swaragdham Society.

“However, when we approached Dr Gandhi for funds to renovate our cremation ground, he refused, saying we have to first end this practice of separate spaces and only then would he support us. There was a lot of resistance from some people but finally, everyone came around.” he says.

But then, they encountered another problem. After the village shut down its ground for Dalits and used MPLAD funds to develop a park there, some of the elderly among the Dalits insisted that they should be cremated in the old ground. “They willed that since their fathers or grandfathers were cremated there, at the ground for Dalits, they too should be cremated there. So if someone insists for emotional reasons, we do not refuse,” he says.

Gandhi, the former Patiala MP who was the brain behind the idea of common cremation grounds, says he could not tolerate that the land of Sikh Gurus should discriminate even after death. “Dignity and equality in death is everyone’s right. Some villages even had as many as five cremation grounds, each for a separate caste group. This is Punjab, which taught the world about langar, sangat and pangat (sitting and eating together) and that every human is equal. I made it clear to panchayats that whether they vote for me or not, they will not get funds if this system of separate cremation grounds is not ended,” he says, adding 144 villages in Patiala passed resolutions to ended this practice.

“We sanctioned around Rs 3 crore in all for the 144 villages that agreed. Around 14 panchayats refused, saying the change was unacceptable to them. No grants were given them for their cremation grounds,” he says.