Everyday consumerables, such as grocery and order-in food items are the key buyout sector, analysts say, and a major reason for kirana stores’ digitisation push. 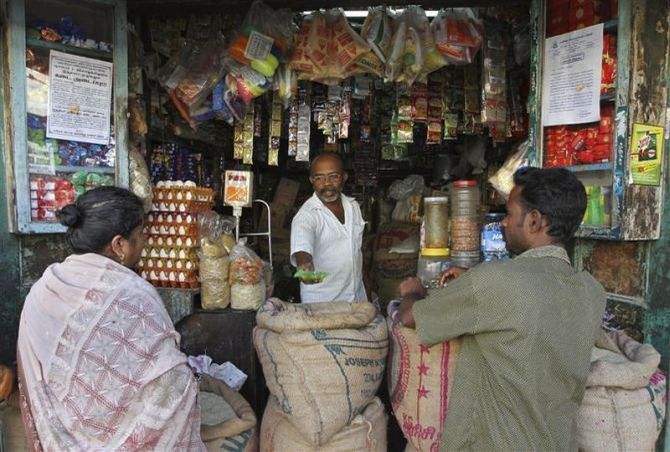 When Paytm, the biggest player in consumer and merchant digital payments, launched a QR-code scanner with voice capability in February 2020, little did it know that the IoT (Internet of Things) device would become a highly useful piece of tech especially during the pandemic.

The soundbox device plays the message, “money received on the Paytm” when a buyer makes online payment, giving the convenience to the merchant of not having to look at his or her phone every time.

Hundreds of thousands of merchants took the upgrade, and now it is spotted at every second small-scale and road-side store.

QR-codes, soundbox and ease of online transactions are only the starting points for a campaign to digitise kiranas and mom-and-pop stores in India.

Players like Paytm, Udaan, Jumbotail, Insta­mojo, among others, are trying to govern the entire B2B retail cycle and put it online.

And all of them are growing fast.

“Internet firms are targeting the opportunity from varied pain-points; some are solving payments and then pitching inventory management (to retailers), others are offering online store-fronts coupled with payment gateways and shipping,” said the founder of a retail tech start-up, asking not to be named.

“The market is huge and there is space for all.”

According to Ernst and Young, there are 12 million kirana stores in India.

During the pandemic, as people postponed major expenditures, they in fact doubled down on essentials such as groceries and foods, said Mahesh Makhija, leader-technology consulting, EY India.

“There is a renewed trust in the local kirana stores with a surge in new consumers visiting the local stores both in metros and non-metros,” said Makhija.

Everyday consumerables, such as grocery and order-in food items are the key buyout sector, analysts say, and a major reason for kirana stores’ digitisation push.

According to RedSeer, online grocery will grow eight times to $18 billion market size in 2024, with 40-50 per cent growth seen in the 2021 calendar year.

A battery of firms capitalising on this opportunity have shown growth in the recent past.

Instamojo, which offers plug-and-play e-commerce to medium and small enterprises (MSME) on the lines of global start-up Shopify, said that over 10,000 business owners signed up on Instamojo every month through last year.

Jumbotail, a B2B platform for grocery procurement, bagged $14 million series B funding this Jan­uary, while Khatabook, a digital ledger tool for MSMEs, made a $10 million acquisition of a US an­alytics firm.

Tailwinds are also there for new entrants, such as Shoopy, which offers invoicing, billing, inventory tracking and management.

“The Covid-19 pandemic through the last one year has clearly shown us that taking the online route for sustaining and growing one’s business is no longer a choice, but a dire necessity.

“We at Shoopy are bridging the gap in the market by offering a state-of-the-art, full-stack solution dedicated to small and mid-size businesses,” said Indar Kriplani, co-founder, Shoopy.

All this is happening in the shadow of large scale retail-tech behemoths like Udaan and Reliance Jio’s Jio Mart, both of which are dep­l­oying deep capital reserves.

Udaan, which raised $280 million at $3 billion valuation in January, said that 1.5 million kirana stores pla­ced 50 million orders via Udaan through 2020.

Jio Mart said that it was averaging 500,000 orders per through the WhatsApp channel.

Even Amazon and Flipkart are focussing on getting the small retailers on board via special programmes.

Flipkart has a local partnership programme for tailors, owners of mobile recharge shops and beauty parlours, among others, who can make deliveries during off-peak business hours.

It also partners with local grocery stores to act as warehouses for hyperlocal demand.

Through similar programmes, Amazon India has taken on 50,000 kirana stores on its platform.

What is West Nile Virus and how does it spread? Read here

YSRCP govt. has failed on all fronts, says TDP MLA