Many analysts see a further downside to stock prices on Dalal Street and Sensex valuations if the crude oil price stays above $110 a barrel for an extended period. 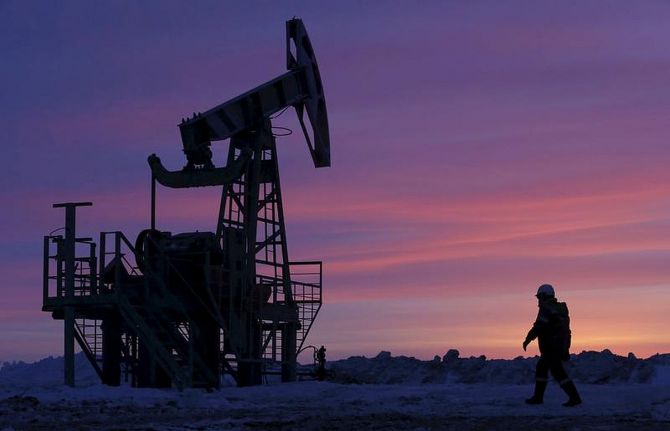 A sharp sell-off in the Indian equities markets after a spike in crude oil prices should not be surprising.

Historically there is a negative correlation between stock valuations in India and the price of Brent crude oil, which is the benchmark for the Indian crude oil basket.

Between 2011 and 2014, crude oil traded above $100 a barrel for an extended period, the Sensex-trailing price/earnings (P/E) was 18X, on average, during the period, nearly 22 per cent lower than the current index P/E of 23X.

The Sensex-trailing P/E multiple is down 17.2 per cent since the beginning of the current calendar year while the crude oil prices are up 68 per cent year-to-date.

The Sensex P/E multiple is, however, down nearly a third from a record high of 34.4X at the end of March 2021.

The decline in the index has, however, been much lower at 9.3 per cent year-to-date.

This is due to a rise in corporate earnings during the October-December 2021 period (Q3FY22).

The index underlying earnings per share was up by around 10 per cent in Q3FY22 —on a trailing 12-month basis —over Q3FY21.

Many analysts, however, see a further downside to stock prices on Dalal Street and Sensex valuations if the crude oil price stays above $110 a barrel for an extended period.

“A spike in crude oil prices due to the Russia-Ukraine conflict will translate into higher raw material and energy costs for the corporate sector.

“The result will be a margin compression in the forthcoming quarters and lower corporate profits,” said Dhananjay Sinha, managing director and chief strategist, JM Institutional Equity.

He expects a significant downward revision in corporate earnings in FY22 and FY23 due to higher energy and commodity prices.

This has prompted a sell-off in India, especially by foreign portfolio investors (FPIs).

There is a historical precedent to this.

For example, when the Brent crude oil traded above $100 for nearly three and a half years between January 2011 and August 2014, the Sensex traded, on average, with a P/E multiple of 18X during the period. 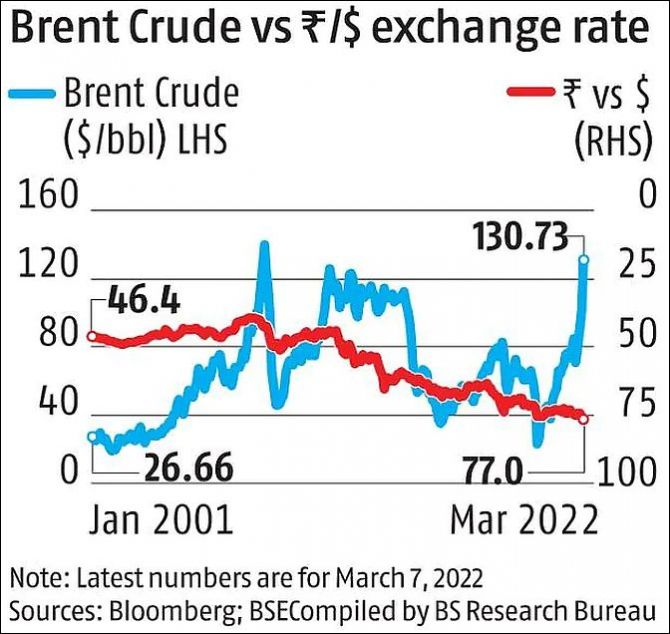 A sharp rise in crude oil prices also affects the markets through its adverse effects on the exchange rate.

Historically, higher energy prices lead to a big rise in India’s current account deficit and a depreciation in the value of the rupee against major currencies.

This, in turn, leads to a sell-off by FPIs, resulting in a decline in stock prices.

For example, the rupee lost nearly a third of its value against the dollar in three years between 2010 and 2013 as higher crude oil prices led to a sharp rise in India’s current account deficit.

The Indian currency recouped some of its losses in 2014 and 2015 as crude oil prices declined from their highs, leading to a sharp cut in India’s import bill.

The rupee has once again come under pressure but the depreciation has been modest so far.

“If the price averages $130/bbl in FY2023, then India’s current account deficit will widen to 3.2 per cent of the gross domestic product, crossing 3 per cent for the first time in a decade.

“This will impart a depreciating bias to the INR and we expect the $-INR cross rate to trade in a range of 76.0-79.0/US$ until the conflict subsides,” wrote Aditi Nayar, chief economist, ICRA Ratings.

UDF meeting likely to be stormy