Haryana election results: Dushyant, 31, is the son of Ajay Chautala and grandson of Om Prakash Chautala, both of whom were sentenced in 2013 to 10 years in jail for their role in a teachers’ recruitment scam. 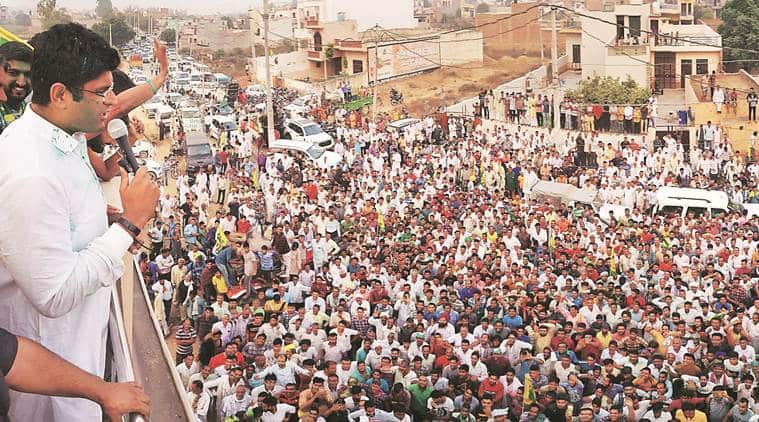 THE FLEDGLING Jannayak Janata Party (JJP), born just 10 months ago out of a family feud in the Indian National Lok Dal (INLD), emerged Thursday as a third political force in Haryana by winning 10 out of the 90 seats in the Assembly polls — a significant number in a verdict that did not throw up any clear winners with BJP and Congress failing to get majority.

As the results came in, however, JJP chief Dushyant Chautala struck a measured note and dismissed talk about him being a kingmaker. “I am neither a king nor a kingmaker… I have called a meeting of senior leaders, including the winning candidates, tomorrow. We will discuss our future course of action, and will abide by whatever decision is taken by the party,” he said.

Dushyant, 31, is the son of Ajay Chautala and grandson of Om Prakash Chautala, both of whom were sentenced in 2013 to 10 years in jail for their role in a teachers’ recruitment scam.

But many of JJP’s winning candidates this time are ambitious turncoats. Ram Karan, the winner from Shahbad (SC), was an INLD member who had lost to BJP’s Krishan Kumar Bedi by a mere 562 votes in 2014. He joined JJP after Congress refused to give him a ticket.

Two of the winners are disgruntled BJP leaders who switched sides for tickets. Jogi Ram Sihag, the winner from Barwala, is former chairman of the Haryana Housing Cooperative Federation, who joined Dushyant’s party on October 3.

Ram Kumar Gautam, the giant-slayer from Narnaund, is known for his role in scrapping the Jat quota. He had once left BJP when it allied with INLD, saying it was a “party of demons”. This time, he quit the saffron party after being denied the ticket from Narnaund.

Devinder Singh Babli, who defeated the BJP state chief at Tohana, joined JJP in October after being denied ticket by Congress.

The JJP also fielded the highest number of Jat candidates at 34 followed by Congress’s 27 and BJP’s 20, and found support in Jat-dominated seats. Anoop Dhanak, one of the four INLD legislators to join JJP when the party split last December, won from Uklana, while Amarjeet Dhanda stopped Paramjeet Singh Dhull (INLD) from scoring a hattrick at Julana.

One of the last to come up with their manifesto, the party targeted the youth by promising right to work and 75 per cent quota for local youths in jobs and an unemployment allowance of Rs 11,000.

When Dushyant founded JJP on December 3, 2018, after his expulsion from INLD by party supremo and grandfather Om Prakash Chautala, many had thought it would be a flash in the pan. But he positioned himself as the heir to the legacy of Choudhry Devi Lal, arguably the tallest Jat leader of Haryana, by using his name Jannayak, and started enrolling members.

His detractors first took note of the young party when Dushyant’s younger brother Digvijay came second in the Jind bypolls, relegating Congress heavyweight Randeep Singh Surjewala to third and INLD, once considered formidable in the seat, to fifth. It also raked in more votes than INLD in the Lok Sabha polls in May.

The JJP draws its cadre not just from a fractured INLD Jat vote, but also from Indian National Students Organisation (INSO), a well organised outfit set up by Ajay Chautala.

Ever since he became the youngest Lok Sabha MP at 26 after defeating former CM Bhajan Lal’s son Kuldeep Bishnoi from Hisar in 2014, Dushyant has been nurturing the youth constituency.

The student cadre translated into enthusiastic supporters during the Assembly elections. With a smattering of green and yellow flags, catchy slogans, and peppy numbers, JJP was very much the third most visible party in the campaign, with long cavalcades of supporters belying the party’s age.