Today, Satabhaya is an island of sorts. For all facilities, including ration, those left behind have to cross a 5 km stretch that includes a narrow unpaved road and a small creek inhabited by crocodiles. 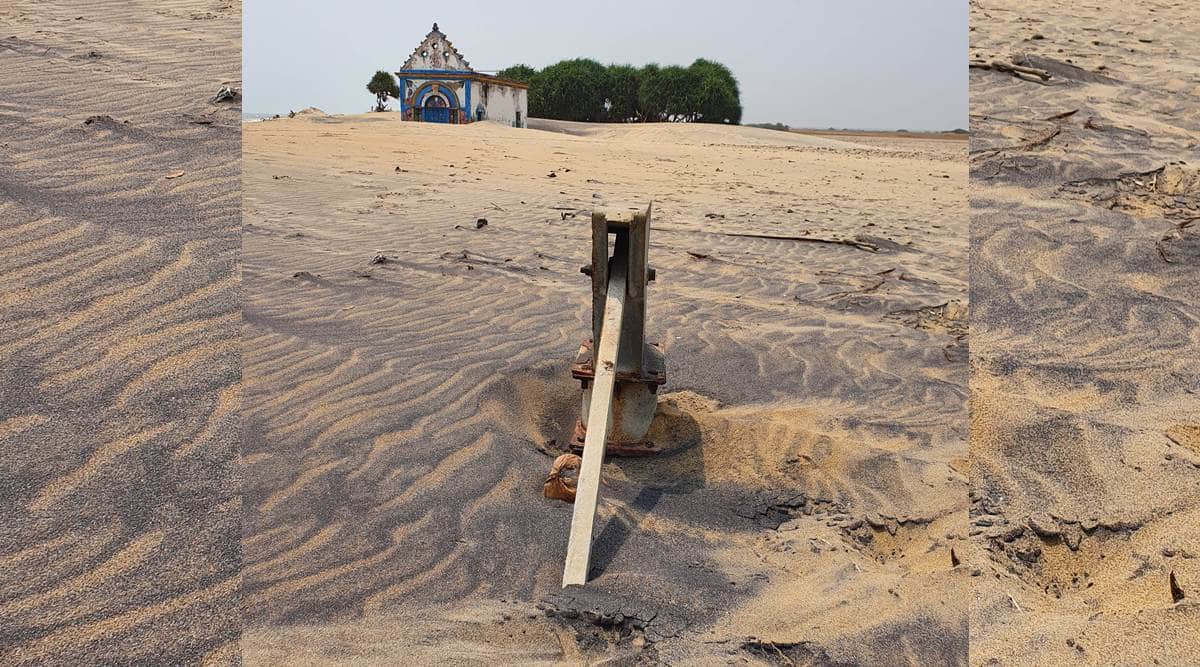 THIS 17-KM stretch along the coast in Odisha’s Kendrapara district, which was once home for nearly 700 families, now stands in solitude, a vast expanse covered in sand as far as the eye can see, peppered with palm trees and abandoned cattle. Close to the shore, there are some remnants of the past: a hand pump half-buried in the sand, cattle left unattended and an old temple without a deity.

The temple was once a bustling weekend spot for many of those families. Today, it has only one regular visitor, Prafulla Lenka. This, in short, is the story of Satabhaya, a cluster of seven villages, which has almost disappeared from the map due to coastal erosion, taking with it a way of life and livelihood.

The six-member family of Lenka was among the 571 that were rehabilitated by the district administration to a colony in Bagapatia, 12 km away, in 2018. But the 40-year-old stayed back to look after his 20 buffaloes, despite the lack of basic facilities like electricity and clean drinking water. Orders have now been issued to rehabilitate 118 of the 148 families left behind. Officials say the other 30 still have paperwork to sort out.

“A plot of land, a house definitely means something to us, we have waited too long, but our livelihoods and our houses have been taken away by the sea. This is the fourth time we will be shifting houses in the last four years,” says Babu Mallick, one of the beneficiaries.

“The administration will provide 10 decimals of land and Rs 1.5 lakh each for construction of houses under Biju Pucca Ghar Yojana to each family,” says Additional District Magistrate (ADM) Basant Kumar Rout.

After the first wave of rehabilitation in 2018 — 16 years after the foundation stone for the Bagapatia colony was laid by Chief Minister Naveen Patnaik — those left behind spread out in other villages beyond Satabhaya, living on rent, to protect themselves from the sea.

“As the villagers here moved out, I shifted my family to another village. The school was also moved to the new colony and there was no point staying back. My family shifted to a rented accommodation and I went to Kerala to earn a living. But after the lockdown, I had to come back. Since then, I have been living here alone. I catch and sell fish to make a living. This was my source of income earlier as well,” says Pavitra Kumar Sahoo (45), who is yet to be rehabilitated and stays in Barahipur, one of the seven villages.

Until almost a decade ago, farming and fishing were the main sources of livelihood. But the sea rapidly swallowed several homes and farm land and increased the salinity of soil, rendering acres infertile. Like Sahoo, a majority of the youths took up jobs in other states like Kerala, Gujarat and Tamil Nadu.

“Around 6 six years ago, my 2-acre land became infertile. After the rehabilitation, our family moved to Bagapatia, but I stayed back because it is difficult for all of us to live in the house built on a 10 decimal plot. My elder son has started working in a plywood factory in Kerala. My younger son will join him after his studies. I try to fish whenever I can,” says Prabhakar Behera (61).

According to a study conducted by the National Centre for Coastal Research in Chennai, Odisha lost 28 per cent of its 550-km coastline to the sea between 1990 and 2016. Kendrapara alone lost 31 km.

Today, Satabhaya is an island of sorts. For all facilities, including ration, those left behind have to cross a 5 km stretch that includes a narrow unpaved road and a small creek inhabited by crocodiles.

This perilous journey is undertaken every month by Brahmananda Dalai (70), on foot. Dalai lives in a small hut with his wife, hardly a kilometre from the sea, and refuses to leave his home.

“I have two daughters and both of them are married. I do not have the strength to move at this age. I have been earning a living through fishing and I want to continue to do so. My wife and I eat the fish I catch and we depend on the ration I get every month. I also manage to sell some fish. I cannot leave my home,” he says.

India in talks for logistics pacts with Russia, U.K. and Vietnam

Businesses over Rs 50 crore must have electronic payment mode from November 1: CBDT

No alliance with Congress in Haryana: AAP