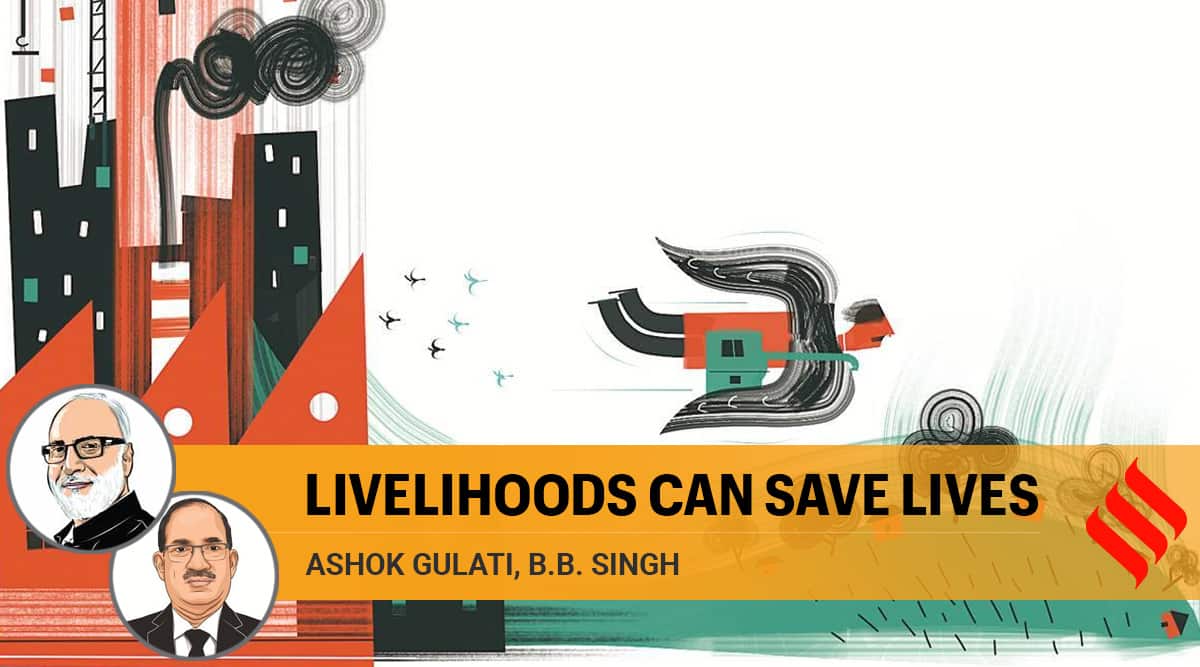 With COVID-19 hitting India like a tsunami, and the health infrastructure caving in, the country is once again staring at the issue of lives and livelihoods. When the prime minister announced a nationwide lockdown on March 24, 2020, we saw the misery of migrant workers. This time, the PM has left it to the states and advised that lockdowns should be announced only as a last resort. Maharashtra and Delhi, where the situation is alarming, have already gone in for lockdowns, triggering an exodus of migrant workers. If things are not brought under control in the next 8-10 days, even the Centre could be forced to impose a nationwide lockdown.

There is no doubt that lives have to take precedence over livelihoods. But in an economy where the informal sector is large — employing millions — extended lockdowns mean that migrant workers can’t protect their livelihoods, and for them, this becomes a matter of their lives.

Here, we focus on the case of migrants and the lessons, if any, from the first lockdown. The questions we ask are: Where are the majority of migrants headed? What are the employment opportunities for them at their native places? How can the government help them?

Inferential Survey Statistics and Research Foundation (ISS&RF) in collaboration with ICRIER surveyed 2,917 migrant workers from six states — Uttar Pradesh, Bihar, Jharkhand, Chhattisgarh, Odisha and West Bengal — extending over 34 districts. These states covered two-thirds of migrant workers at an all-India level, and those who returned to their native villages/small towns during the first wave of COVID-19. The survey was conducted in three phases: July-August 2020; November-December 2020 and in the last week of February 2021.

As per the survey, of the migrants who left cities and industrial towns for their native villages and small towns, 35.4 per cent had no employment, another 35.8 per cent were involved in agriculture as self-employed (SE) labour, perhaps on their joint family farms, 9.7 per cent worked as agriculture labour, 4.6 per cent in MNREGA and other public works and 12.2 per cent as casuals in other non-agriculture work (see figure). Of course, the pattern varied across the selected states. Bihar migrants had the least unemployment (3.6 per cent) while West Bengal migrants had the highest (54.9 per cent), with the weighted average unemployment of migrants at about 35 per cent. Self-employed agriculture engaged 36 per cent of migrants at their native place, with this ratio varying from 67 per cent in Jharkhand to as low as about 10 per cent in West Bengal. The situation did not change much even after five months of stay at their native place.

As a result of this migration to their native place, and the nature of employment and unemployment, the average family monthly income dropped from Rs 14,342 at the place of migration to just Rs 2,033 at the native place — a massive contraction of about 86 per cent. The returnees could not sustain their lives with such a huge loss in their incomes. No wonder, by February 2021 end, more than 63 per cent of these migrants had moved back to cities in search of work. And now, if lockdowns spread, their livelihoods will be threatened again.

What can the government do? Phase-1 of our survey showed that less than 5 per cent of migrants availed of MGNREGA, which increased to 7.7 per cent in phase-2. Obviously, MGNREGA as a strategy to provide employment has not succeeded. It is quite possible that migrants are not interested in MGNREGA work or MGNREGA has not reached their places in rural areas.

The survey also revealed that only 1.75 per cent of migrants had Jan Dhan accounts and 28.37 per cent had some other bank account. Migrants benefitting from any of the government loan schemes, be it for agriculture or non-agriculture related, were abysmally low at less than 1 per cent, and skill development was at less than 2 per cent. The only benefit they received was subsidised food (wheat and rice).

These results indicate that existing government programmes cannot provide gainful employment opportunities to the migrants at their native places. One has to think out-of-the-box for a special package for eastern India, based on infrastructure and industrial development. Agriculture cannot absorb more people. It is already overcrowded. Engaging returning migrants in building new agri-value chains has some potential to create productive employment and protect livelihoods. Until that is done, the lives of these migrants will remain precarious.

But in the meantime, if the government can scale up its “one nation, one ration card” scheme, and make subsidised grains available at places of work in cities and industrial towns, migrants can hopefully hold on for some time before taking a call on moving back to their native places. As of today, the ground reality shows that much more needs to be done on this scheme to make it fully operational. Luckily, government godowns are overflowing with excess grain stocks, and it may be useful to distribute at least a part of this to benefit migrant workers rather than incur high costs of maintaining these stocks. Along with this, some financial assistance under the Garib Kalyan Yojana can also be extended to migrants to help them remain in their cities of their work. And if they can be put under some group medical insurance, it will go a long way in protecting them against the COVID onslaught. But to do all this, one needs a robust database on migrants, which is currently missing. As a result, they are left to fend for themselves, for their lives as well as livelihoods.

No wonder, then, that migrant workers face hard choices: If they go back to their native places, their meagre incomes drop by more than 80 per cent. And if they stay back in cities, there is no one to help them.

This article first appeared in the print edition on April 26, 2021, under the title “Livelihoods can save lives.” Gulati is Infosys Chair Professor for Agriculture at ICRIER and Singh is CEO, ISSRF.

Styling the police for four generations

Congress old guard is back, Delhi set for 3-way fight

Entry into Delhi allowed from Gurugram, commuters claim chaos at UP border