Even Karunanidhi had attended a rally for Mahesh, establishing him as one of the DMK’s next-generation faces. 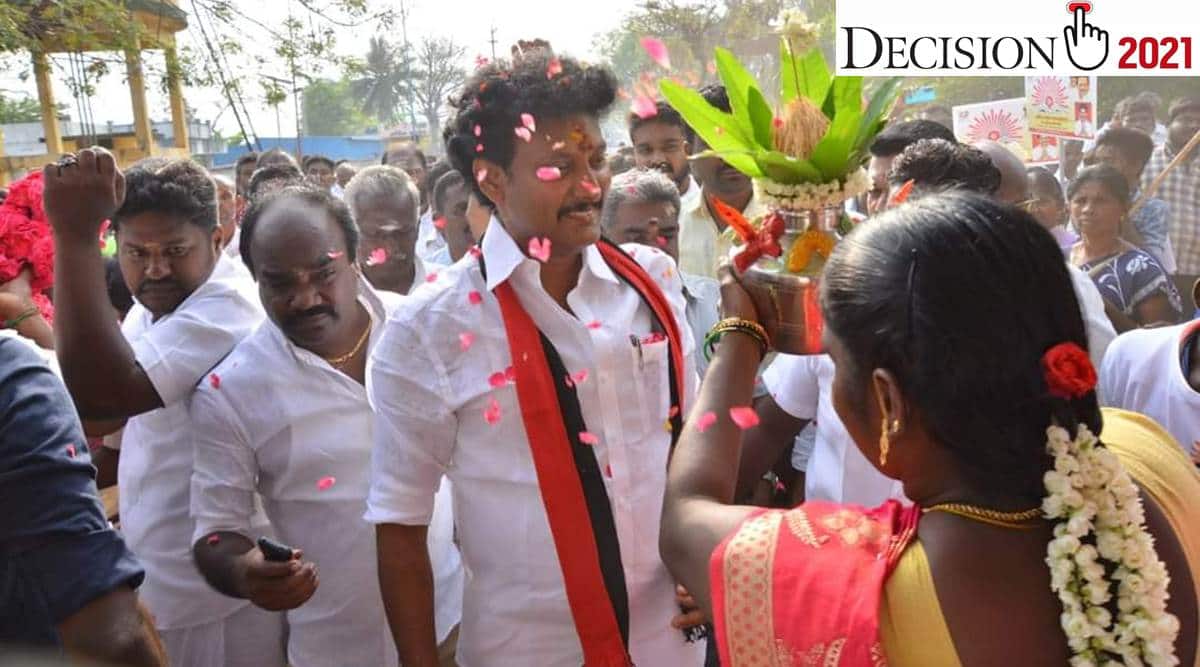 It’s a family friendship that goes back generations — starting with Anbil Mahesh Poyyamuzhi’s grandfather Anbil Dharmalingam and Udhayanidhi Stalin’s grandfather M Karunanidhi, continuing with their respective fathers Anbil Poyyamuzhi and Stalin, and now the two of them.

In an interview to The Indian Express, Udhayanidhi, who is making his electoral debut, said he began his foray into politics campaigning for Mahesh in the 2016 Assembly polls, when Mahesh stood from Thiruverumbur, in his family’s pocketborough of Trichy. Even Karunanidhi had attended a rally for Mahesh, establishing him as one of the DMK’s next-generation faces.

As Mahesh, 43, walks 10 hours a day, seeking votes again in Thiruverumbur, the Tamil Nadu first family’s backing is clearly with him. There are at least 100 cadres in his entourage, mostly youth. His campaign office has huge posters of him and Udhayanidhi flanking Stalin.

A good orator, Mahesh says he has chosen to campaign on foot rather than use a vehicle. He would rather make a personal connect, he says.

Unlike the Arcot region and Kongu belt of Tamil Nadu, Trichy voters are seen as less driven by caste or religion. The majority of the population is OBC (Mutharaiyer community), with sizeable Muslim and Dalit pockets. Mostly workers, they have been badly hit by demonetisation, GST and the pandemic.

Thiruverumbur is considered a DMK stronghold. Mahesh says the absence of “Kalaignar thaatha (grandfather Karunanidhi)” is of course felt, but adds, “Thalapathi (Stalin) is doing all that Kalaignar would have done.”

It is not dynasty politics, Mahesh insists. “There was no calculated grooming… but something that evolved due to the contributions made by our families.”

Having taken the political plunge in 2015, he has proved a fast learner — including walking the thin line over religion given the DMK’s avowed atheism. Mahesh quotes Stalin: it is all about respecting people’s beliefs.

He talks about a photograph from decades ago of Karunanidhi and his grandfather attending an event at a temple. “We have always been a party that respects beliefs,” Mahesh says.

However, if his long association with the DMK is a blessing, Mahesh also carries the burden of misdeeds of previous regimes. “People remind us of the violence blamed on our leaders last time. We promise there will be no repeat,” says a youth part of his procession.

After a spike, Maharashtra sees decline in fresh cases

‘No helmets for Sikh women in Chandigarh’

Explained: Why Mayawati is wooing the Brahmins again ahead of 2022 assembly elections