To help the country emerge as a true welfare State, political parties must put the country’s interests first before strategising to win elections and short-term goals, argues Ramesh Menon.

A remark of Prime Minister Narendra Modi in July of how Opposition parties were distributing freebies to woo the electorate, triggered a stormy debate on its advantages and disadvantages. It continues to simmer.

Opposition parties hit out, saying they were zeroing in on the poor, who deserve a better life.

Arvind Kejriwal, the chief minister of Delhi, reacted sharply, saying that providing facilities for free would not lead to an economic crisis, but giving free benefits of lakhs of crores of rupees to ‘friends’ would do just that.

He was referring to corporate tax write-offs that the central government bestowed on industrialists and business houses.

This rule empowers the Prime Minister to decide and then later secure ratification from the Cabinet.

It took just 36 hours for the government to implement the tax cut that would result in foregoing a whopping Rs 1.45 lakh crore in revenue.

Corporates were gleeful. And grateful.

According to a report by Oxfam, which central agencies are presently investigating, the corporate cuts resulted in a whopping Rs 1.5 lakh crore loss.

The Dravida Munnetra Kazhagam currently in power in Tamil Nadu asked if the central government’s move to waive off loans for corporates was not a freebie.

Political parties across the spectrum have given out freebies before elections for many years now. After they came to power, many implemented what they promised to give for free. Like electricity and water.

Political parties have egged their governments to give out smartphones and tablets to students, pensions to senior citizens of scheduled castes and tribes, health cover to poor families, cash to farmers, electric grinders, television sets, cycles to girl students, cash transfers to women and farmers and so on.

With the prime minister’s remark, the debate is raging on whether freebies are good for the people. There are divided opinions: Many feel it helps the poor. Others feel it is a burden on the exchequer and put together it can run into lakhs of crores.

Is it good spending?

Is it helping the poor see a new day?

Is free electricity and water helping millions of people use the money they save on other essentials like nutrition and education?

Are cash transfers to women and farmers helping them buy what they essentially need? 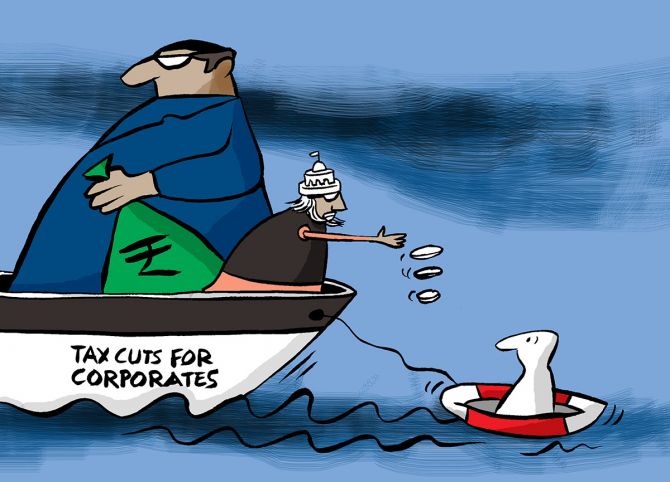 Nearly 60 years ago, the then chief minister K Kamaraj in Tamil Nadu introduced free education and started mid-day meals in schools to ensure that poor children took advantage of education and had a better future.

The benefits of it were palpable, and soon, others chief ministers like M G Ramachandran continued it in the state. Later, various states introduced mid-day meals in schools.

By no stretch of imagination can free education and mid-day meals be seen as a freebie today.

Nor can cycles to school girls in Bihar as it has boosted attendance and enrolment of girls in school. It will have far-reaching effects.

However, free electricity and water can also result in a lot of it being wasted as it is free. Similarly, cheap rice at one or two rupees a kilo can keep many people from working as they would have done otherwise, as we have seen in some southern states.

Another argument against freebies is that there is nothing called a free lunch. Ultimately, someone has to pay for the freebie.

If a government indulges in doling out freebies to get votes, it also compromises spending or creating windows of opportunity for the economy to grow.

It can also slide into debt and then borrow and get sucked into a whirlpool of not being able to manage its finances.

Various entities like the AAP government in Punjab have realised after coming to power that they are saddled with huge debts left behind by the previous government. They have the unenviable task of fire-fighting to stop the economy from collapsing.

With electioneering for state assembly polls kicking off in Gujarat, Kejriwal, who heads the Aam Aadmi Party, has promised 300 units of free electricity, a monthly allowance of Rs 1.000 to women above 18, a job guarantee to every youth, and if that does not fructify, an unemployment dole of Rs 3,000 every month.

Freebies have played a role in Kejriwal getting control of Delhi and Punjab. But his support largely came from those who appreciated good governance where he vastly improved educational and health infrastructure.

Andhra Pradesh Chief Minister Jagan Mohan Reddy also rode to power in 2019, offering aid of Rs 15,000 to every mother who sent her children to school.

Reddy also offered free or concessional power to farmers, cash of Rs 7,500 to every farmer as financial assistance, Rs. 24,000 to self-owned taxi and auto drivers, and Rs 10,000 to every handloom-owning weaver family.

If he ensures these promises are carried out, the state exchequer will be poorer by around Rs 27,451 crores (Rs 274.51 bilion). It is something that Andhra Pradesh can ill afford today.

Uttar Pradesh, Chief Minister Yogi Adityanath promised before the assembly elections held earlier this year that 10 million free smartphones and tablets would be given to the youth. Before the elections, he gave away 1,00,000 pieces to college students. Cost: Over Rs 2,000 crore (Rs 20 billion).

As a petition filed in the Supreme Court by BJP leader Ashwani Upadhyay asking that freebies should not be allowed to be offered by political parties before elections, the court asked the Election Commission to respond.

The EC told the court that it could not intervene in the process as it was for the voters to decide whether these promises would be kept and whether it has financial sustainability. But, earlier, it wanted to hold political parties accountable for the promises they made and wanted them to show where the funds would come from.

Why did the EC change face suddenly?

The EC has a golden opportunity to gain credibility and respect by using this debate on freebies to make political parties accountable when they offer all kinds of freebies and promises to the electorate, which they know very well that they will not be able to fulfil.

Remember the promise before the 2014 elections of lakhs of rupees coming into every account? 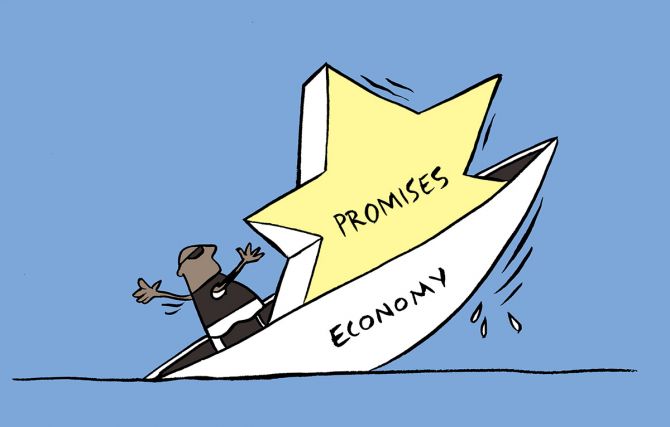 In the last three years, Uttar Pradesh, Jharkhand, Odisha, Telangana and Kerala have seen the largest rise in subsidies. Indeed, it is not good for their economies.

Chhattisgarh, Gujarat and Punjab are spending more than ten per cent of their revenue on subsidies.

Punjab is under a debt of Rs. 3 lakh crore. It will be almost impossible for any government to bring it back to sustainable financial health.

That is most of India.

This year’s annual report of Oxfam points out that the poor are increasing in India, totalling nearly 134 million. This, while the richest one per cent have amassed 51.5 per cent of the total wealth while the bottom 60 per cent have just managed a mere five per cent!

According to a World Bank report on global poverty, close to 600 million Indians survive at less than Rs 84 a day. They arrived at this figure using data from the Centre for Monitoring Indian Economy.

India, it said, has the largest number of poor people in the world.

It is a truism that welfare measures for the disadvantaged go a very long way in a poor country like India.

We saw that with the MGNREGA rural employment guarantee scheme, which gave wages consistently to millions of poverty struck villages helping them to keep their kitchen fires burning.

In June 2022, MGNREGA provided 27.2 million households with jobs. The programme guarantees 100 days of work to every rural household.

Former West Bengal finance minister Amit Mitra says that freebies are fundamental for the inclusive growth of India. He pointed out that the government is the biggest giver of freebies for political leverage paying out Rs 1.25 lakh crores as freebies.

In January this year, Modi announced Rs 6,000 each to 100 million farmers.

In its race to the top of the world and become a Vishwaguru as many ruling politicians put it, India has no choice but to expand its social security systems.

To help the country emerge as a true welfare State, political parties must put the country’s interests first before strategising to win elections and short-term goals.

Ramesh Menon, award-winning journalist, educator, documentary film-maker and corporate trainer, is the author of Modi Demystified: The Making Of A Prime Minister

PM to be briefed on defence indigenisation, other projects

There’s more to bank frauds than meets the eyes

In a first, MCG hires agency for management of e-waste