One of the key leaders of the BJP campaign, and a possible CM candidate, Sarma spent Sunday addressing a road show at Bijni, followed by public meetings at Dudhnoi, Borkhetri and Hajo. Finally, in the afternoon, Sarma called it a day with a rally at Jalukbari, his own constituency. 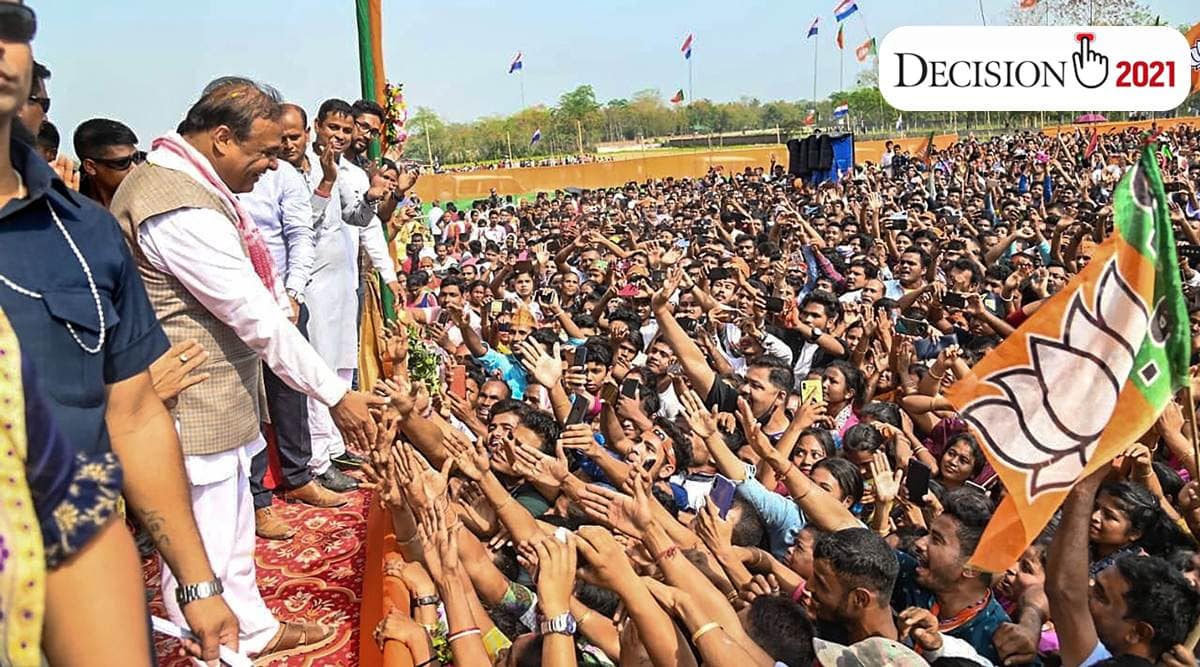 WITH THE Election Commission cutting down the ban on him campaigning from 48 hours to 24, senior BJP leader and Assam minister Himanta Biswa Sarma counted down the end of Assam’s poll campaign with a series of rallies.

The ban, following Sarma’s threat to put Bodoland People’s Front chief Hagrama Mohilary behind bars on an NIA case, had been announced on Friday. After it ended on the completion of 24 hours, on Saturday evening, with the EC accepting his apology, Sarma took to the streets almost immediately, with a massive rally in the state capital Guwahati.

One of the key leaders of the BJP campaign, and a possible CM candidate, Sarma spent Sunday addressing a road show at Bijni, followed by public meetings at Dudhnoi, Borkhetri and Hajo. Finally, in the afternoon, Sarma called it a day with a rally at Jalukbari, his own constituency.

Accused of making polarising statements during his campaign, he said in Jalukbari, “We don’t do communal politics. We have worked equally for the development of Hindus, Muslims, Buddhists, Jains, Christians, everyone over the last five years. We have been successful in upholding a new illustration of secularism in Assam.”

Also with Sarma at the rally, held in Sualkuchi in Jalukbari, were his wife, son and daughter. They joined him on the stage in bowing to the crowd to express their gratitude.

Chief Minister Sarbananda Sonowal and other senior leaders of the BJP and ally AGP were also present on the dais. While Home Minister Amit Shah was expected, he had to cut short his Assam visit due to the Maoist attack in Chhattisgarh.

Later in the evening, Sarma tweeted photos of Shah meeting him briefly and wrote, “Very kind of Hon HM Sri @AmitShah to have come at Sualkuchi helipad especially to bless me ahead of our public meeting. Following the dharma of duty first and nation foremost, he had to return to Delhi in wake of a Naxal attack in #Chhattisgarh, in which we lost our brave hearts.”

There was one more blip, though, for Sarma before the high-pitch campaign ended Sunday. As coronavirus numbers surge across the country, a clip of a recent media interview of his surfaced saying there was no Covid in Assam, and asking how beauty parlours would function if people wore masks.

As the video went viral, Sarma tweeted, “Those who are making fun on my statement on mask, must come to Assam and see how we have contained COVID-19 (compared) to states like Delhi, Kerala, and Maharashtra, along with impressive recovery of our economy. We will celebrate Bihu also with the same enthusiasm this year.”

India reports record Covid-19 recoveries in 24 hours with over 28,000 cured or discharged: Govt

Utsav in Kodagu hopes to bring back tourists

Out of mind: Beware the voter

Thief who tested positive for Covid-19 escapes from Gwalior hospital