Agriculture Minister Narendra Singh Tomar Friday reiterated that the government is ready to talk with the farmers and urged them to stop their agitation in the “interest of the common people”. 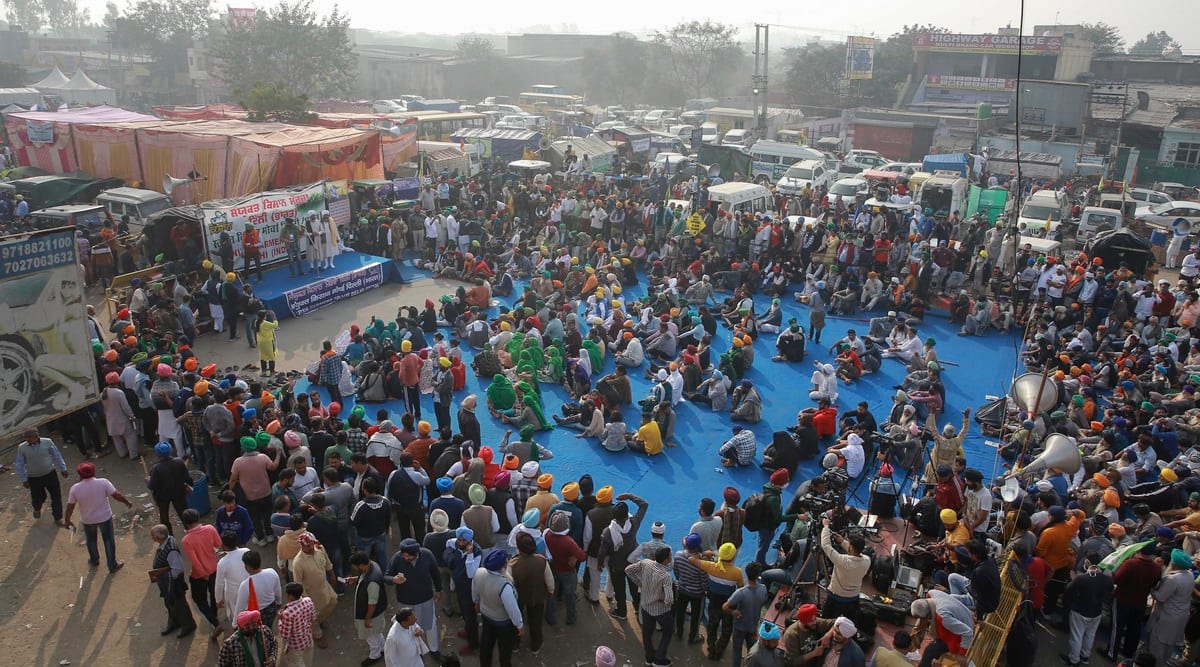 Agriculture Minister Narendra Singh Tomar, on the other hand, reiterated that the government is ready to talk with the farmers and urged them to stop the agitation in the “interest of the common people”. He further said the government is willing to make reforms in the laws after talks, ANI reported.

‘I think we will find a solution. I am hopeful. I would like to urge the Farmer Unions that they should break the deadlock. The government has sent them a proposal. If there is an objection over the provisions of an Act, the discussion will be held over it,’ Union Minister Tomar told ANI.

Meanwhile, two senior Delhi Police officers heading security arrangements at Singhu border, where thousands of farmers have been camping for two weeks, have tested positive for Covid-19, an officer said. Hundreds of police personnel have been deployed at the Singhu border point to prevent the protesters from entering the national capital. The three farm laws enacted in September have been projected by the government as major reforms in the agriculture sector that will remove the middlemen and allow farmers to sell anywhere in the country. However, the protesting farmers have expressed apprehension that the new laws would pave the way for eliminating the safety cushion of Minimum Support Price and do away with the mandis, leaving them at the mercy of big corporates. The Centre has repeatedly asserted that these mechanisms will remain.

Here are the highlights from Day 16 of farmers’ protests:

Congress leader Rahul Gandhi on Friday attacked the government, alleging that it wants the income of farmers in the entire country to be as low as that in Bihar. The former party chief cited a media report that claimed that an agricultural household in Punjab earns the highest in a year, while the figure was the lowest in Bihar.

“The farmer wants his income to be as much as that of farmers in Punjab. The Modi government wants the income of all farmers of the country to be as much as that of Bihar farmers,” Gandhi said in a tweet in Hindi. The survey cited by Gandhi showed that an average Indian agricultural household earns Rs 77,124 in a year, with Punjab farmers earning Rs 2,16,708 annually and that of Bihar only Rs 42,684.

NCP chief Sharad Pawar on Friday asked the government “not to test the tolerance of cultivators”. Talking to reporters, the former Union agriculture minister also said that the protest at Delhi borders may spread elsewhere if a timely decision was not taken by the Centre on the farmers’ demands.

He maintained that the farm bills were passed in a “hurried” manner in the Parliament despite the opposition parties calling for a detailed discussion. “Today, farmers have made the extreme demand of withdrawing the laws first and said the issue can be discussed later. The Centre’s position on the same, however, does not seem to be favourable. Hence, there are signs that the deadlock may continue for some more days,” Pawar said. The veteran leader said that more people travelling in around 700 tractors joined the ongoing protest near Delhi border on Friday morning. “The protest is restricted to Delhi border. But it cannot be ruled out that it may spread elsewhere too if no decision is taken in time. We insist the Government of India that the farmer is the ‘annadata’ (food provider) of the country, his tolerance should not be tested,” he added.

Samajwadi Party president Akhilesh Yadav on Friday accused the BJP of adopting a “heartless attitude” towards the demands of farmers and said the global response to their protest has “deeply” hurt the image of India worldwide. His party has been backing the farmers’ protest against the Centre’s three new farm laws.

“The BJP government is ignoring farmers by adopting a heartless attitude towards the justified demands of the agitators shivering on the streets. The global response that is coming to this has deeply hurt the democratic image of India worldwide. The BJP government should stop exploiting those who feed us,” Yadav said in a tweet.

The Samajwadi Party (SP) president has asked party workers to organise peaceful sit-ins at district headquarters on December 14 in support of the farmers’ agitation, PTI reported.  The party has already been taking out ‘yatras’ since December 7 in the state in their support.

Taking a sip of tea sitting beside a bonfire at the Singhu border, 52-year-old Makkhan Singh Deol tapped on a carton full of roasted gram and said, “The farmers have enough supplies for the winters.” Numerous bonfires dot the GT-Karnal road, the “new home” of the protesting farmers who have been staying put at the Singhu border point of the national capital demanding withdrawal of the new farm reform laws.

A trolley containing jaggery, roasted gram and peanuts arrived on Friday morning from Gurdaspur, Punjab. Another containing dates and gajjak reached the Singhu border on Thursday evening to help the protesting farmers fight the biting cold. “These are to keep us warm. Come and eat. You won’t catch a cold,” Deol tells this reporter. He just finished his tea and was now moved onto ‘gajar halwa’.

According to Jagjeet Sandhu from Jalandhar-headquartered Shaheed Bhagat Singh Youth Federation, the farmers get tea, kheer and tomato soup twice a day to keep the cold at bay.

Death of advocate’s son was a homicide, not suicide, rules HC

Reading between the lines as language is co-opted