On March 11, over 32 lakh devotees had turned up in Haridwar on the first shahi snan on Maha Shivratri, and the crowd is expected to swell on the upcoming shahi snans on April 12, 14 and 27. 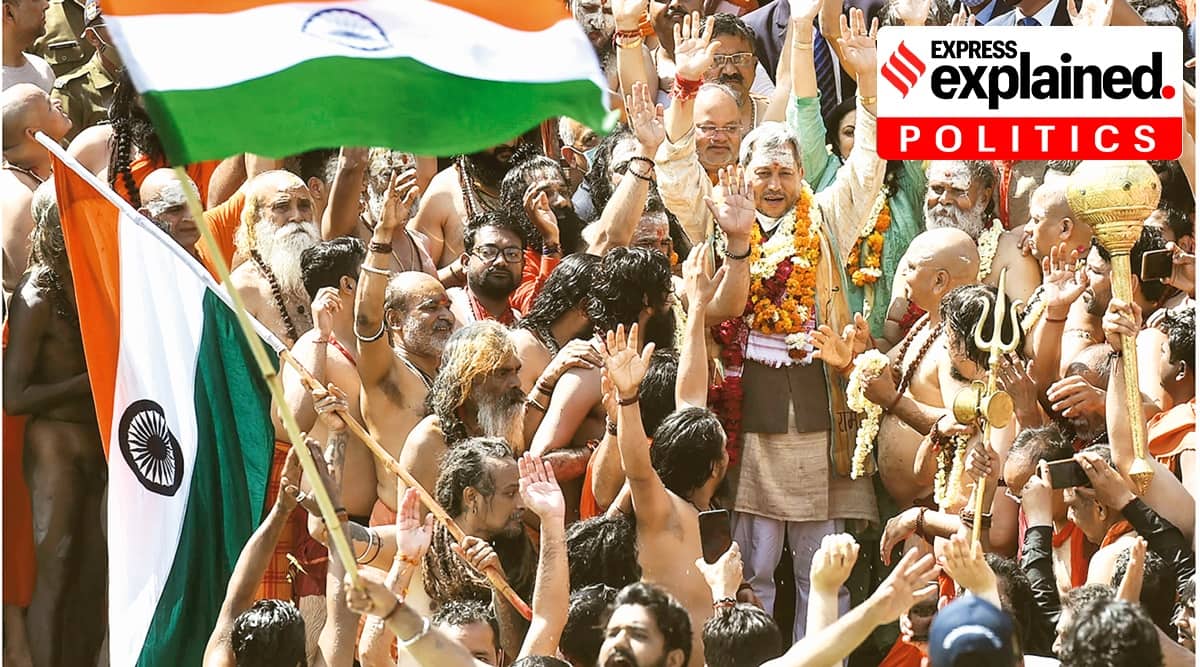 The Kumbh Mela is taking place in Haridwar, with the Centre advising that the number of devotees be capped as Covid-19 cases rise in Uttarakhand. Yet the new Chief Minister, Tirath Singh Rawat, has been insisting that the Mela should be “open for all”. This is in contrast with the approach of his predecessor, Trivendra Singh Rawat, who had backed the Centre’s guidelines and said no risk should be taken that might make Haridwar another “Wuhan” or “markaz”.

On March 11, over 32 lakh devotees had turned up in Haridwar on the first shahi snan on Maha Shivratri, and the crowd is expected to swell on the upcoming shahi snans on April 12, 14 and 27.

As of Friday, there were 728 active cases in Uttarkahand, with Haridwar recording the highest at 248. This is up from 463 active cases in the state (141 in Haridwar) only a fortnight earlier; since then, 1094 new cases have been detected. Yet there are several reasons that could explain the CM’s insistence on bringing in the crowds, with precautions:

For the BJP, it is politically important not to upset the seers at the Kumbh Mela. Sources in the government said the strict conditions this year — a curtailed duration and stringent rules related to permission for entry in the Mela area — had conveyed a message that the BJP government was stopping people from taking part in a religious event.

Akharas and seers, and devotees who had been waiting for taking holy dip at Har ki Pauri for the last over one decade since the last Kumbh in Haridwar in 2010 — when seven million devotees attended — were questioning why there should be such restrictions on a religious event when huge crowds are turning up in election rallies and roadshows of leaders in states like West Bengal and Assam. In fact, if seers and office-bearers of various Akharas are upset, there is a sense that it could harm the party in elections in those states as well.

The Kumbh Mela was on top of the agenda of Tirath’s first meeting with officers after taking oath. He directed that flowers be showered from helicopters on devotees doing shahi snan. The following day, Tirath himself visited Haridwar, showering flowers on seers, and sought their blessings. “There is no strictness. But Covid guidelines should be followed… It’s open for everyone,” Rawat said there. 📣 Express Explained is now on Telegram. Click here to join our channel (@ieexplained) and stay updated with the latest

The lockdown last year had hit tourism with the Kanwar Yatra cancelled and the Char Dham Yatra starting late and on a limited scale. The local hospitality sector was hoping for a revival in the Kumbh Mela, and had staged a demonstration in Haridwar last month demanding that “SOP hatao, Kumbh karao”.

“The conditions in the SOPs sent a negative message. There were hardly any tourists until the first week of March, and even tourists to places other than Kumbh were hesitating to come,” said Ashutosh Sharma, president of the Hotels’ Association in Haridwar. “But then the new CM said there will be no rok-tok, and devotees turned up in huge number on Mahashivratri from Haryana, Delhi and Western UP. Hotels are getting advance bookings from April 5 onwards from across the country,” he said.

There are more than 500 hotels in the Mela area and over 600 dharmshalas; all are booked from April 1 onwards.

Sanjeev Nayyar, general secretary, Prantiya Udyog Vyapar Pratinidhi Mandal, said the SOPs remain. “Everyone will follow those… But the previous CM’s remark about ‘markaz’ had created among devotees a sense of fear that after arriving from faraway places, they might be hospitalised or put in isolation even if they had high temperature or cough. The new CM’s message of ‘open for all’ has ended those fears.” Nayyar’s association has sought an appointment with CM Tirath to express their appreciation.

The Chief Minister is visiting Haridwar again on Saturday, March 20.

In an address to BJP workers, the CM said he has directed officials to let people travel to Kumbh because Akharas are taking out processions without an audience. Sources said Akharas and other bodies of seers raise funds during Kumbh Mela to sustain themselves. Akharas have followers from across the country, who stay in camps to attend religious programmes including discourse sessions and make donations. Akharas too spend on preparations for the stay of followers, and other seers too receive donations from devotees during the congregation.

‘This Is Us’: Jon Huertas Reveals Fans Will Be ‘Super Surprised’ By What Happened To Jack & Nicky