The poll outcome ends 25 years of AKP rule in Istanbul. Imamoglu garnered around 55% of the votes, one of the highest opposition records in recent elections. 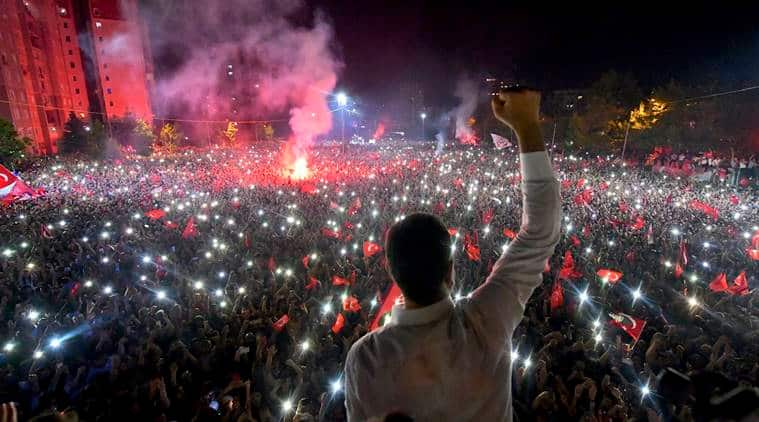 Turkey’s President Recep Tayyip Erdogan has suffered a setback in the Istanbul Mayor’s elections, whose results were declared on Monday. Erdogan, who has led the country since 2003, faces the first political challenge from the Opposition, as the candidate from his party — Justice and Development Party (AKP) – lost to the main opposition party’s candidate. Ekrem Imamoglu defeated former Prime Minister Binali Yildirim, a close aide of Erdogan.

It was by winning the Istanbul mayoral election in 1994 that Erdogan first rose to political prominence as a young and dynamic politician. His rise has been steady over the last 25 years and he has been now ruling the country for the last 16 years. Erdogan himself has said in the past “whoever wins Istanbul, wins Turkey”. Istanbul, with more than 10 million voters, represents one-fifth of the entire Turkey, and it has traditionally set the political trend for the rest of the country.

The poll outcome ends 25 years of AKP rule in Istanbul. Imamoglu garnered around 55% of the votes, one of the highest opposition records in recent elections. He had won the mayoral elections on March 31 itself, before the Supreme Election Council (YSK) on May 6 cancelled the results. This turned Turkish public opinion against the ruling party. Serkan Demirtas, a columnist in the English-language Turkish daily Hurriyet, said that this was a “big blow on the sense of justice and conscience and created an even bigger sympathy for Imamoglu as the sufferer of this controversial judicial decision”.

The opposition, which appeared tired and not ready for a fight, has been re-energised after the win. Local neighbourhoods in Istanbul like Besiktas, which sits by the famous Bosphorous, erupted in joy, as the election results started pouring in. It is too early, however, to write an epitaph for Erdogan, who has positioned himself as the most powerful leader since Mustafa Kemal Atatürk, the founder of the modern Turkish republic.

Imamoglu will face a local council, which is still controlled by Erdogan’s party, and he will have to navigate the politics to become an effective elected official. “I am calling on our head of state, President Erdogan. I’m ready and willing to work in harmony with you on Istanbul’s urgent issues such as earthquake safety in the city, subway construction, refugees and so on,” he said, mindful of the challenges ahead.

While the next presidential and parliamentary elections are not due before 2023, there could be calls for early elections. After the defeat in Istanbul, Erdogan may face some dissidence within his party, including top ministers, it will be a test of his political mind as he faces an Opposition which has shown green shots of recovery.

BJP playing fraud on the Constitution in Goa, says Congress

Kohli: Can see a cultural shift in the last two, three years in Indian cricket

Amy Coney Barrett: All you need to know about Donald Trump’s recent nominee to US Supreme Court