Germany's Markus Rehm's personal best is good enough for gold at every Olympic Games since 1992. However, Rehm's bid to compete in the Olympics Games has suffered setbacks in the past. When Germany’s Markus Rehm won gold in the long jump with 8.18 metres at the Tokyo Paralympics last week, he was disappointed. Rehm, going by the moniker ‘Blade Jumper’, was well short of his para world record of 8.62m set in June.

American Mike Powell’s world record of 8.95m and his compatriot Bob Beamon’s Olympic record of 8.90m are still some distance away for Rehm. Yet his personal best is still good enough for gold at every Olympic Games since 1992. But the 33-year-old has been stopped from competing at two Olympic Games. He takes off with his right prosthetic leg, which is deemed to give him an advantage, although his leg is amputated below the knee.

In the final (T64 class), Rehm jumped 83cm more than the silver medallist, France’s Dimitri Pavade. Yet it is the comparison with able-bodied Olympic champions that makes his efforts stand out.

His best jump of 8.18m at the Paralympics would have placed him joint-fourth at the Tokyo Olympics. 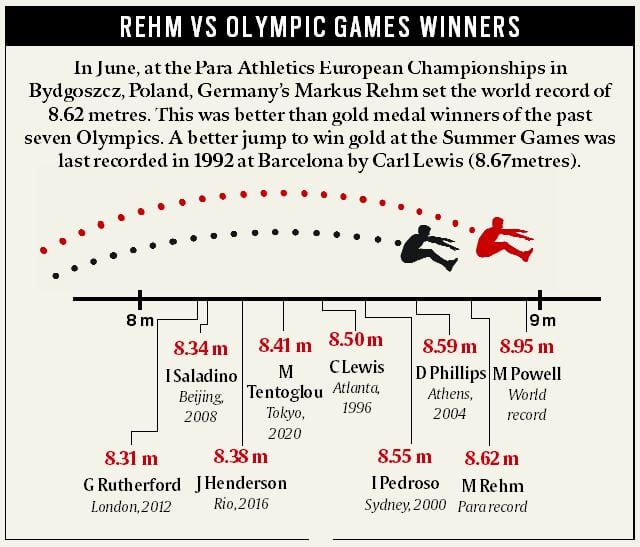 In 2014, the German Athletics Federation (DLV) excluded Rehm from the squad for the European Athletics Championships in Zurich although he had won the long jump (8.24m) at the national championships. DLV president Clemens Prokop said back then that the decision followed biometric measurements done at the nationals in Ulm, which showed the prosthesis may give him an unfair advantage because of a ‘catapult effect’.

“There is significant doubt that jumps with a leg prosthesis and a natural joint are comparable,” Prokop was quoted as saying by the Associated Press.

Two years later, he could not compete in the Rio Olympics after a study to find out if his prosthetic blade gave him an advantage was inconclusive.

One of the researchers, Professor Wolfgang Potthast of the Institute of Biomechanics and Orthopaedics at the German Sport University Cologne, said the prosthesis gave Rehm a less efficient start on the runway but a more efficient jump.

“We saw disadvantages in the run-up for athletes with amputations of the lower thigh that we could determine were due to the prosthesis. But in the movement techniques, we noted an advantage due to the improved jump efficiency. These are two completely different movements and cannot be offset,” Reuters quoted Potthast as saying.

Just before the Olympics, Rehm decided to join a World Athletics (then called IAAF) working group to study the use of prostheses and put aside his attempt to participate against able-bodied athletes at the Games.

He was also unable to participate at the Tokyo Olympics because of an existing rule of World Athletics. 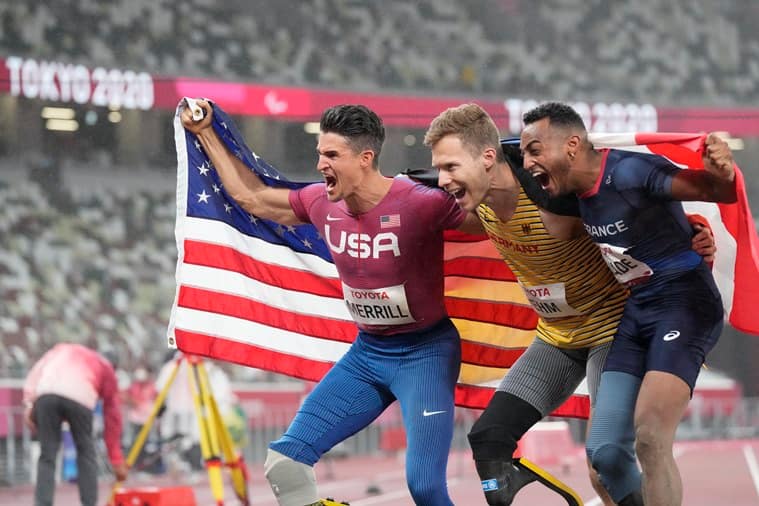 The amended Rule 6.3.4 deals with mechanical aids that are considered assistance. “The use of any mechanical aid, unless on the balance of probabilities, the use of an aid would not provide them with an overall competitive advantage over an athlete not using such aid.” The earlier rule put the burden of proof on an athlete, but it was removed in the amended rules following criticism by the Court of Arbitration for Sport.

Rehm, who competes in the 100m, the 4x100m relay and long jump, uses different kinds of blades.

The three-time Paralympics gold winner in the long jump wears a carbon fibre blade prosthesis after a wakeboarding accident when he was a teenager.

The stiffness of the blade he uses for sprints is less than that of the one used for jumping. He told the sports medical journal Aspetar: “The jump take-off requires more stiffness. If you tried to jump off a sprint blade it would flex too much and collapse. Jumping is always a compromise though, because you need to be fast on the run-up and to take off well, so you must find a compromise between the different stiffness needed for the two parts.”

Karlie Kloss Is Married! Get to Know Her Husband, Joshua Kushner