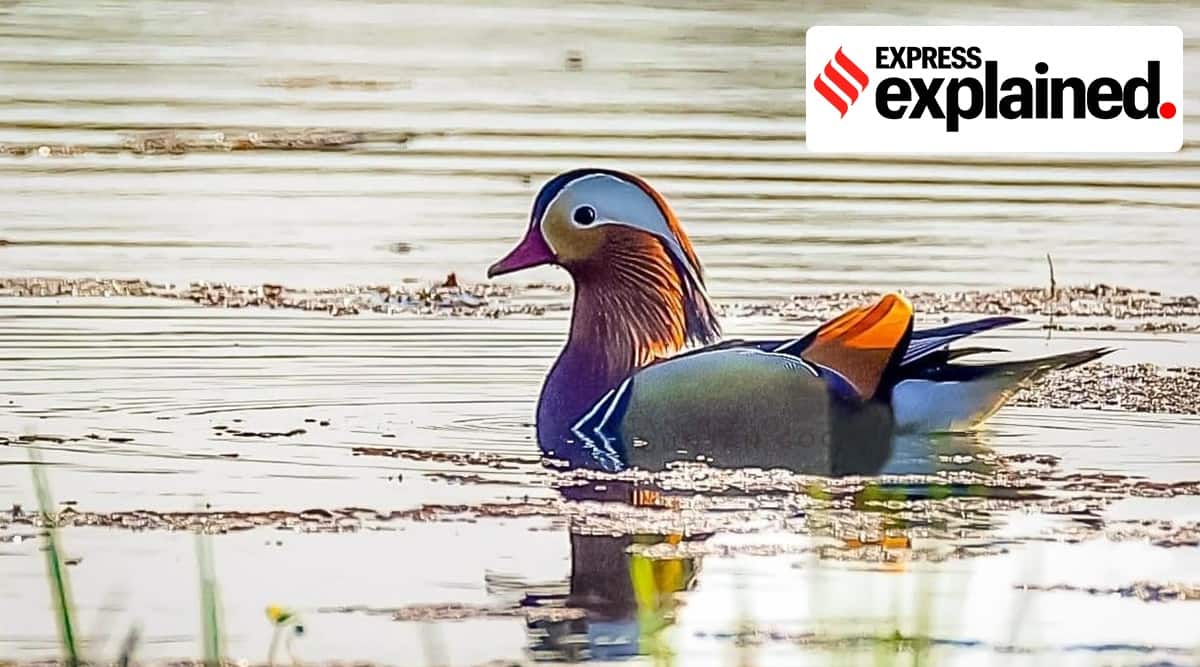 Floating in the Maguri-Motapung beel (or wetland) in Assam’s Tinsukia district for over a week is the spectacular and rare Mandarin duck. First spotted on February 8 by Madhab Gogoi, a Tinsukia-based birder and tour guide, the duck has since become the star of the wetland — an area affected by a blowout and fire at a natural gas well located close by in May 2020.

“When I heard that Madhab had spotted the duck, I did not believe him,” said Binanda Hatiboruah, a bird guide, also based in Tinsukia, “But when I saw it myself, I hugged him [Madhab] and almost lifted him up. I was that excited.” The bird was last sighted in this part of Assam more than a century ago, in 1902.

What is the Mandarin duck and why is it exciting?

Considered the most beautiful duck in the world, the Mandarin duck, or the (Aix galericulata) was first identified by Swedish botanist, physician and zoologist Carl Linnaeus in 1758. The eBird website, a platform that documents birds world over, describes it as a “small-exotic looking bird” native to East Asia. “It’s very beautiful, with majestic colours and can be spotted from a distance,” said Deborshee Gogoi, a Digboi-based professor of marketing, and a birder, who also spotted the bird last week, “It was a male — we could tell because in this species, the males are more colourful than the females.”

The eBird website describes the male as “very ornate with big orangey ‘sail fins’ on the back, streaked orangey cheeks, and a small red bill with a whitish tip” and the female with “narrow white spectacles on a shaggy grey head, bold pale dappled spots along flanks, and pale bill tip.”

The migratory duck breeds in Russia, Korea, Japan and northeastern parts of China, explains Gogoi. The duck now has established populations in Western Europe and America too. In 2018, when a Mandarin duck was spotted in a pond in New York City’s Central Park, it created a flutter among local residents.

The duck, however, rarely visits India as it does not fall in its usual migratory route. There are only a handful of recorded sightings here. “It was recorded in 1902 in Dibru river in the Rongagora area in Tinsukia,” said Hatiboruah, “More recently, it was sighted in Manipur’s Loktak Lake in 2013, and in Saatvoini Beel in Manas National Park and Tiger Reserve in Assam’s Baksa district 2014.”

According to ornithologist Dr Anwaruddin Choudhury, a former joint secretary of the forest department, while the duck is not a globally threatened species, spotting one is always considered significant because they only make “rare appearances.” Hatiboruah said it was a “historical sighting, especially because no one can say when we will see it again.”

So what is it doing in Assam?

While birds usually follow a regular route for migration, “it is also common for them to stray from the path,” said Dr Choudhury. This is what possibly happened to the Mandarin duck, which was spotted at Maguri beel.

“It was possibly accidental, could have lost its way or strayed from the flock,” said Hatiboruah. Since February 8, the bird has appeared several times, attracting a number of birders not just from Assam, but different parts of the country, including Mumbai, Delhi, Kolkata and Pune. However, the bird was last seen on Wednesday. “There have been no sightings in the last two days,” said Gogoi, “It could have possibly moved away from Maguri beel.”

What is the Maguri beel, why is it important?

The Maguri Motapung wetland — an Important Bird Area as declared by the Bombay Natural History Society — is located close to the Dibru Saikhowa National Park in Upper Assam. According to Gogoi, the wetland has a grassland adjacent to it. “The entire ecosystem (grassland and wetland) is very important as it is home to at least 304 bird species, including a number of endemic ones like Black-breasted parrotbill and Marsh babbler.”

In May 2020, the beel was adversely affected by a blowout and fire at an Oil India Limited-owned gas well. The resulting oil spill killed a number of fish, snakes as well as an endangered Gangetic dolphin, and the fire had burnt a large portion of the grassland. Hatiboruah said that there has been considerable recovery due to at least nine waves of floods last year that cleared the oil. Gogoi added that while most migratory season usually begins in September, the birds arrived only in November as this year that’s when the fire was doused — “the sighting of the duck is undoubtedly a positive sign.”

‘PM Modi only cares about his image, not soldiers’: Rahul Gandhi in latest attack on purchase of VVIP planes

Till the end, Tollywood tried to live up to the phenomenon called Soumitra Chatterjee