Turkey’s Sea of Marmara, that connects the Black Sea to the Aegean Sea, has witnessed the largest outbreak of ‘sea snot’. The sludge has also been spotted in the adjoining Black and Aegean seas. 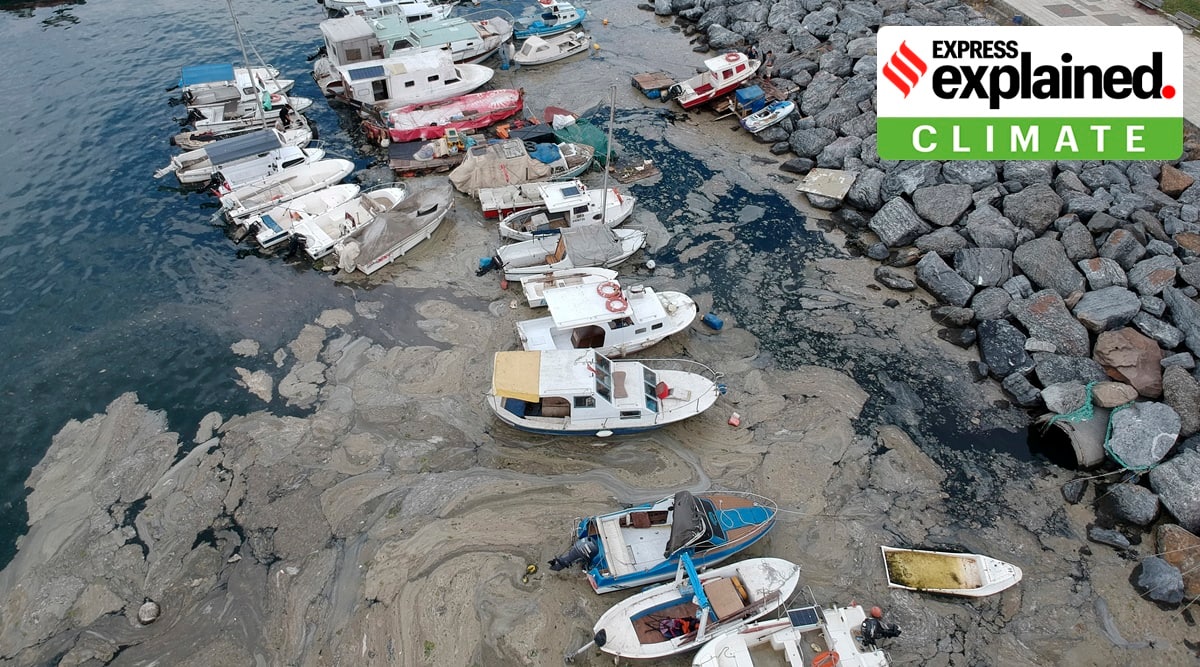 There has been growing environmental concerns in Turkey over the accumulation of ‘sea snot’, a slimy layer of grey or green sludge in the country’s seas, which can cause considerable damage to the marine ecosystem.

Turkey’s Sea of Marmara, that connects the Black Sea to the Aegean Sea, has witnessed the largest outbreak of ‘sea snot’. The sludge has also been spotted in the adjoining Black and Aegean seas.

As the slimy layer spreads across the country’s seas, there are urgent calls now to tackle the crisis.

Turkey’s President Recep Tayyip Erdogan has said considerable steps will be taken to solve the problem and protect the country’s seas.

But what is ‘sea snot’ and how did it cause the present crisis? We explain.

What is causing ‘sea snot’ in the seas of Turkey?

‘Sea snot’ is marine mucilage that is formed when algae are overloaded with nutrients as a result of water pollution combined with the effects of climate change. The nutrient overload occurs when algae feast on warm weather caused by global warming. Water pollution adds to the problem.

Environmental experts have said that overproduction of phytoplankton caused by climate change and the uncontrolled dumping of household and industrial waste into the seas has led to the present crisis.

The thick slimy layer of organic matter, which looks like a viscous, brown and foamy substance, has spread through the sea south of Istanbul and also blanketed harbours and shorelines.

Erdogan has said dumping of sewage in the sea along with rising temperatures is causing the crisis. He has blamed the outbreak on discharge of untreated water from cities like Istanbul, which is home to 16 million people, into the seas.

A ‘sea snot’ outbreak was first recorded in the country in 2007. Back then, it was also spotted in the Aegean Sea near Greece. But the current outbreak in the Sea of Marmara is by far the biggest in the country’s history.

How badly can the crisis affect the marine ecosystem?

The growth of the mucilage, which floats up on the surface of the sea like a brown phlegm, is posing a severe threat to the marine ecosystem of the country. Divers have said that it has caused mass deaths among the fish population, and also killed other aquatic organisms such as corals and sponges.

The mucilage is now covering the surface of the sea and has also spread to 80-100 feet below the surface. If unchecked, this can collapse to the bottom and cover the sea floor, causing major damage to the marine ecosystem.

Over a period of time, it could end up poisoning all aquatic life, including fishes, crabs, oysters, mussels and sea stars.

Besides aquatic life, the ‘sea snot’ outbreak has also affected the livelihoods of fishermen. They have said that the sludge is getting collected in their nets, making them so heavy that they break or get lost. Moreover, the mucilage coating the strings make the nets visible to fish and keep them away.

Some fishermen have also pointed out that the problem has already existed for a long time and aquatic life was getting poisoned by the dumping of waste and global warming. Over the years, their catch has considerably reduced and there have been less fish in the sea. This has compounded the economic crisis for fishermen.

Some experts have also warned that the ‘sea snot’ can cause an outbreak of water-borne diseases in cities like Istanbul.

Ecologists said that the brown mucilage floating in the seas of Turkey is a sign of how the marine ecosystem can be damaged and the effect it can have on the environment as a whole if serious steps are not taken to tackle the twin crisis of pollution and global warming.

What steps are being taken by Turkey to solve the crisis?

President Erdogan has said steps will be taken to “save our seas from this mucilage calamity, leading with the Marmara Sea”. “My fear is, if this expands to Black Sea… the trouble will be enormous. We need to take this step without delay,” he was quoted as saying by the BBC. Turkey’s environment minister Murat Kurum said the entire Sea of Marmara will be turned into a protected area. Moreover, steps are being taken to reduce pollution and improve treatment of waste water from coastal cities and ships.

“Hopefully, together we will protect our Marmara within the framework of a disaster management plan. We will take all the necessary steps within three years and realise the projects that will save not only the present but also the future together,” Kurum was quoted as saying by The Guardian.

He also said Turkey’s biggest maritime clean-up operation is being launched on Tuesday, and called on local residents, artists and NGOs to join hands to extend assistance. He further said that Turkey has planned to reduce nitrogen levels in the sea by 40%, which would help tackle the crisis.

However, not everyone is convinced, especially after Erdogan’s ruling coalition rejected a proposal from the main opposition CHP party to set up a parliamentary committee to investigate the “sea snot” crisis.

Ali Oztunc, a lawmaker from CHP, has called on the Erdogan government to approve the Paris Agreement on climate change which aims to cut down on carbon emissions and reduce global temperatures.

“The Sea of Marmara is an inland sea but, unfortunately, it is becoming an inland desert because of the wrong environmental policies,” he told AFP, adding that the government should impose strong penalties on waste disposal facilities that fail to follow the rules.

Mustafa Sari, dean of Bandırma Onyedi Eylül University’s marine faculty, told Al Jazeera that he had warned about the crisis more than a year ago but nothing was done. He pointed out that untreated waste and agricultural runoff have been poured straight into the sea for decades. “For 40 years, it’s been done wrong. There is not one specific cause of this but many problems. Everyone is to blame. This is a last warning that we must do something about it,” he said.

There have also been growing concerns over President Erdogan’s $15bn Istanbul canal mega-project, which aims to dig a nearly 17 km channel between the Black and Marmara seas. Ecologists have argued that the move could seriously damage an already ailing marine ecosystem.

Professor Bayram Ozturk of the Turkish Marine Research told BBC that unless there was fresh investment to treat and purify waste water being pumped out of Istanbul, there would be no long-term solution to the crisis.