Formulae of 'kaadhas' have been shared widely on social media, with claims that they have prophylactic properties against the coronavirus. However, some users are complaining of gastrointestinal troubles. Since the onset of the Covid-19 pandemic earlier this year, there has been a flood of information about home remedies, herbal concoctions and other cure-alls claiming to be preventative antidotes to infection with the novel coronavirus.

One of the most popular among these is a Unani concoction that has come out of Maharashtra’s Malegaon, a town that achieved dramatic success in containing the spread of the virus in June 2020 after being one of the worst affected in the state in the preceding months.

The state government employed a wide range of measures to tackle the situation in Malegaon – which is known from its high density of population, congested neighbourhoods, and a significant religious conservatism among its population – which led to big improvements after alarming initial reports.

In the popular imagination, however, it was the widespread consumption of a ‘kaadha’ (herbal concoction) recommended by a local Unani college that played a key role in the turnaround.

After the first infection was detected on April 9, the contagion had spread fast in the town, reaching 861 infections and 65 deaths by June 10. Following concerted efforts from the administration and local people, however, the spread slowed to a single-digit per day increase by the first week of July.

As this success story became popular as the “Malegaon Pattern” of containing the Covid-19 pandemic, social media was abuzz with the purported pivotal role played by the ‘kaadha’.

Worryingly – and also soberingly – however, since mid-August, the number of cases seem to be rising again in some parts of the town.

So, what is this so-called ‘Mansoora Kaadha’ of Malegaon?

Mansoora Kadha, prepared by Malegaon’s Mohammadiya Tibbiya College (located in the Mansoora Campus on the outskirts of the town), is a variation of the traditional Unani formulation called ‘Joshanda’, which is made from a variety of herbs, and prescribed by practitioners of Unani for the treatment of ailments of the upper and lower respiratory tracts that involve mucus congestion.

Joshanda contains elements that are known to have mucus-clearing properties, along with the easing of respiratory irritation, that helps in relieving cough.

Joshanda has been traditionally prescribed by Unani practitioners in the treatment of cold, cough, and related allergic disorders.

Dr Abul Irfan Ansari, Professor and Head of the Department of Surgery (Jarrahat), said he has been using Joshanda in his OPD at the hospital for the last 35 years in the treatment of flu, including swine flu, caused by the H1N1 virus.

When the Covid-19 pandemic hit, Dr Ansari tried a variation of Joshanda on some potential patients who were showing mild symptoms similar to those of the virus, and found that it provided relief. He recommended its use as a prophylactic and an immunity booster, and wrote to other Unani colleges and practitioners asking them to use this formulation, which was slightly different from the traditional Joshanda.

“The variations that we made were intended to make it easier for anyone – Unani practitioners or laypersons – to prepare the formulation. There’s no complex formula, and every ingredient has to be taken in equal proportion. Also, while the herbs are usually used whole, here we have crushed them into a powder. Also, we are using the word ‘kaadha’ as many Indians are not familiar with the Persian word,” Dr Ansari said.

Who is drinking the ‘kaadha’?

The College has packed and sold about 2 lakh Joshanda packets since March on ‘no profit no loss’ basis, Dr Ansari said.

Unable to meet the growing demand given the institution’s limited resources, the institute has released the formulations in the public domain, and publicised it so that people can make it at home, Dr Ansari said.

So is this the only ‘kaadha’, or are there others as well?

As this ‘kaadha’ became popular – aided by social and mainstream media – several other ‘Malegaon Kadhas’ made their appearance in a short time in response to the demand.

One of the prominent ones was the Jamiat Ulema-e-Hind’s ‘kaadha’, which uses household spices, and is to be consumed with tea. 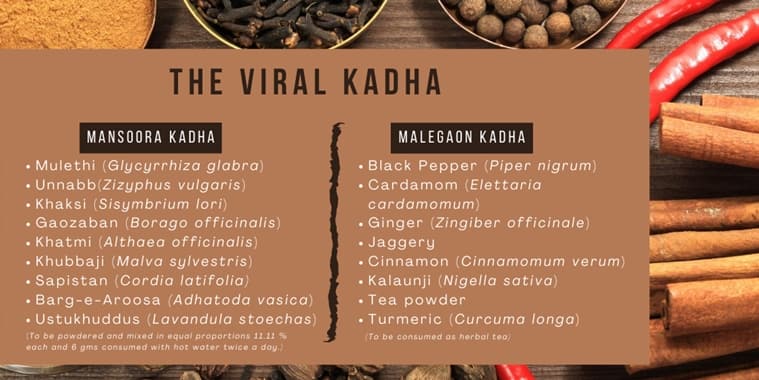 A third ‘kaadha’ formula which is in circulation is one recommended by the Union Ministry of AYUSH. It’s an ayurvedic tea made from tulsi, dalchini, manuka, and ginger, which is to be consumed after being sweetened with jaggery, or after adding a few drops of lemon juice.

Should you then be rushing to consume these formulations?

No, you should not. As per experts, be it Joshanda or any other herbal ‘kaadha’, moderation in use is advisable. Those suffering from gastrointestinal issues must be especially careful.

Indiscriminate use of these formulations, without scientific medical advice, may have adverse effects on the users’ health. In fact, there have been complaints from people who say they have been using the ‘kaadhas’, about troubles such as piles, rectal bleeding, or acidity.

Asked about this, Dr Ansari defended his own Mansoora Kaadha, but cautioned that unsupervised consumption of formulations made from spices such as cloves, cardamom, or cinnamon can indeed result in such complications.

“The spices in the Jamiat’s kaadha, which is branded as ‘Malegaon Kaadha’ do have positive properties, but they have to be taken in moderation. The makers have also not given any formula, and users are using them in whatever doses they like. Overuse of these can definitely cause health issues such as gastritis, piles, rectal bleeding, etc. People need to be more careful,” Dr Ansari said.

Joshanda, he said, is an age-old formula that does not have any such side effects.

Dr Monica Gulati, who has co-authored research on the effectiveness of Joshanda in respiratory ailments, said: “Any drug, of any origin, can aggravate a disease if taken without expert advice. Another major cause of the adverse effects is the lack of advice on the dose for each herbal component. There are certain advisories circulating on social media where the names of the spices are mentioned, but there is nothing about doses. We all know that spices if taken beyond a limit can cause a lot of discomfort.”

According to Dr Gulati, before consuming any ‘kaadha’ or herbal tea, one should consult an expert, and tell the expert in full detail any existing conditions that you may be suffering from. You must also take clear instructions about the dose and frequency of consumption.

Six-month extension to complete update of NRC by June 30

Ashok Dinda to play for Goa in upcoming domestic season