Pinaka Rocket System: A look at the indigenously developed rocket system named after Lord Shiva's bow, its role in the battlefield and importance of the latest acquisition, which will be complete by 2024. 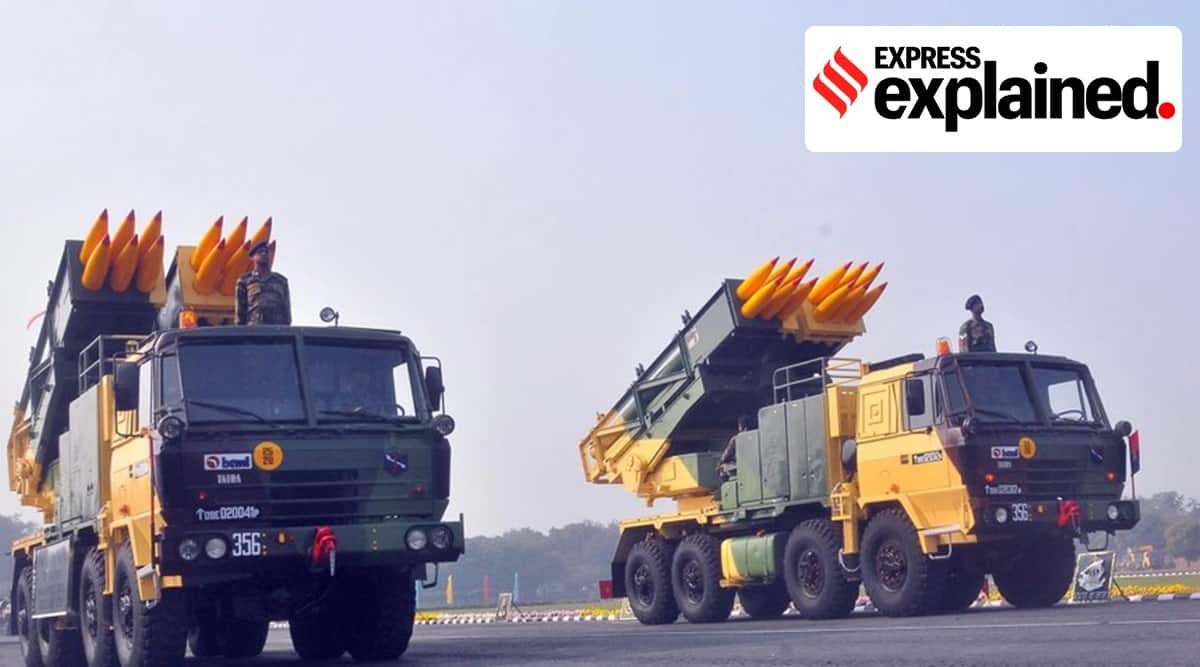 The Ministry of Defence (MoD) on Monday announced that it’s acquisition wing had signed contracts with three Indian companies for supply of six regiments of the Pinaka Rocket System to be deployed along borders with Pakistan and China.

A look at the indigenously developed rocket system named after Lord Shiva’s bow, its role in the battlefield and importance of the latest acquisition, which will be complete by 2024.

The origin of Pinaka rocket system

In the battlefield, long range artillery systems like Pinaka are used for attacking the adversary targets prior to the close quarter battles which involve smaller range artillery, armoured elements and the infantry.

The development of the Pinaka was started by the Defence Research and Development Organisation (DRDO) in the late 1980s, as an alternative to the multi-barrel rocket launching systems of Russian make, called like the ‘Grad’, which are still in use.

After successful tests of Pinaka Mark-1 in the late 1990, it was first used in the battlefield during the Kargil War of 1999, quite successfully. Subsequently multiple regiments of the system came up over the 2000s.

Also in Explained | What is the Special Frontier Force or Vikas Battalion?

The salvo of Pinaka, its versions and capabilities

The Pinaka, which is primarily a multi-barrel rocket system (MBRL) system, can fire a salvo of 12 rockets over a period of 44 seconds. One battery of Pinaka system consists of six launch vehicles, accompanied by the loader systems, radar and links with network based systems and a command post. One battery can neutralise an area one kilometre by one kilometre. As a key tactic of long range artillery battle, the launchers have to ‘shoot and scoot’ to ensure they themselves do not become the targets, especially due to its back blast. Thus the launcher vehicles are required to have a high degree of maneuverability.

The Mark-II version of the rocket has been modified as a guided missile system by integrating it with the navigation, control and guidance system to improve the end accuracy and increase the range. The navigation system of the missile is linked with the Indian Regional Navigation Satellite System. In comparison to artillery guns, rockets are less accurate, but with addition of guidance and navigation systems, this aspect is taken care of.

With its upgrades, the Pinaka Mark-II can be a key element in the “network centric warfare”. The rocket system can operate various modes and can carry different types of warheads.

At the time when India is facing hostilities on both fronts, the announcement enhancing the long range artillery capabilities can be looked as a strong signal to the adversaries.

The acquisition wing of MoD has on Monday signed contracts with public sector entity Bharat Earth Movers Ltd and private players Tata Power Company Ltd (TPCL) and Larsen & Toubro (L&T) for supply of six Pinaka Regiments to the Regiment of Artillery of the Indian Army at an approximate cost of Rs 2,580 crore.

“These six Pinaka regiments comprise 114 launchers with Automated Gun Aiming and Positioning System (AGAPS) and 45 Command Posts to be procured from TPCL and L&T and 330 vehicles to be procured from BEML. These six Pinaka Regiments will be operationalised along the Northern and Eastern Borders of our country further enhancing the operational preparedness of our armed forces. Induction of six Pinaka regiments is planned to be completed by 2024,” a statement from the MoD said.

The ministry has called this step a major boost to ‘Make in India.’ “This is a flagship project showcasing public private partnership under the aegis of Government of India (DRDO and MoD) enabling ‘Aatmnirbharta’ in cutting edge Defence technologies,” it said.

BJP wouldn’t have scrapped Article 370 if J&K was Hindu-dominated: Chidambaram

COVID-19 so widespread due to dominant A2a type of SARS-CoV-2: Study