The government said the emergency was required to check soaring prices of food and hoarding of essentials by a "food mafia". But the Opposition said it was "in bad faith". 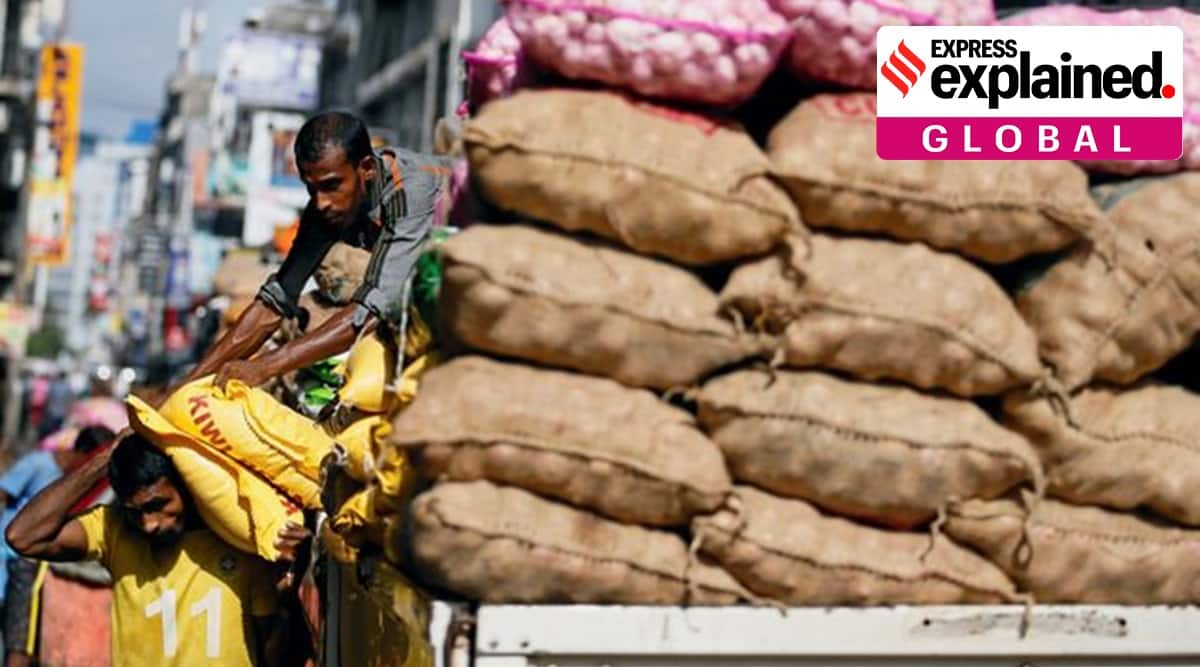 The government said the emergency was required to check soaring prices of food and hoarding of essentials by a “food mafia”. But the Opposition said it was “in bad faith, with the ulterior motive of further restricting fundamental rights of the citizenry and moving further in the direction of authoritarianism”.

The emergency has added to the uncertainty of Sri Lanka’s food crisis, which has all the makings of a perfect storm.

Sri Lanka is bent by a huge foreign debt burden. It is unable to repay these loans because of critically low foreign exchange reserves.

With the tourism industry destroyed since the 2019 Easter attacks, Sri Lanka had lost one of its top foreign exchange pullers even before the pandemic struck.

The tea and garment industries have also been hit by the pandemic, affecting exports.

Remittances increased in 2020, but are not sufficient to pull Sri Lanka out of its crisis. At the end of July, the country’s foreign exchange reserves were $ 2.7 billion, while it needs to repay foreign debts of about $ 4 billion.

A currency swap is a loan agreement for repayment with interest in the local currency.

The low forex reserves also mean Sri Lanka has been unable to import as much as it used to in the past. Earlier this year, it stopped imports of vehicles and several other items, including edible oils, turmeric, and even toothbrushes, in a bid to save precious foreign exchange. Sri Lanka imports many of its essential food items, including pulses, sugar, wheat flour, vegetables, and cooking oil.

This is the supply side problem of the crisis.

On the demand side, the printing of Rs 800 billion by the Central Bank of Sri Lanka over the last 18 months to ease the economic crisis has increased liquidity in the economy. But this infusion of money, and the consequent increase in demand without a corresponding increase in supply, has led to a sharp spike in inflation.

This in turn has devalued the currency, made imports costlier, added to the debt and put the forex reserves under more pressure.

The government’s decision, under the emergency, to fix prices of all essential items has further hit imports, as traders are reluctant to buy at high prices internationally without a promise of returns from sales in the markets at home.

In addition, there is a restrictive import licensing regime.

The emergency has been declared under the legal framework of the Public Security Ordinance (PSO).

Section 2 of the PSO empowers the President to declare a State of Emergency in two situations: when the President is of the opinion that it is expedient to do so a) in the interest of public security and the preservation of public order, or b) for the maintenance of supplies and services essential to the life of the community.

“With the declaration of a State of Emergency on 30th August 2021, the President is now able to promulgate Emergency Regulations dealing with any subject at any given time. Considering Sri Lanka’s history with emergency, other security related laws and legacy of repression, this raises serious concerns,” the Colombo-based think tank Centre for Policy Alternatives noted in a statement.

While the emergency has to be taken to Parliament for renewal every three months, the President is empowered to bring in regulations that do not need parliamentary oversight or approval.

“The importance of ensuring that the extraordinary powers arrogated to the executive through these emergency regulations have to be used purely for the specific purposes recognised by the regulations…must be recognised as a temporary conferral of extraordinary power for the government during times of acute crisis. It should not be considered as a substitute for the ‘normal legal regime’. As such the State of Emergency should be in force only for a limited period of time,” the Centre for Policy Alternatives note said.

Sri Lanka was under an emergency for over three decades during the war against the Liberation Tigers of Tamil Eelam (LTTE) until it was allowed to lapse in 2011; and then for brief periods during the anti-Muslim riots in 2018, and after the Easter bombings in 2019.

In Parliament, Opposition members argued that there was no need for an emergency, as other legislation were available to check hoarding and cap food prices.

The appointment of a serving major general as the Commissioner General of Essential Services has raised concerns that the civilian administration is being bypassed. Memories of another food crisis

The last time the country experienced a food crisis was in the 1970s, during the Sirimavo Bandaranaike government’s experiment with socialism.

The long queues seen outside the government-owned Sathosa grocery shops have triggered memories of the “ship-to-mouth economy” of those days, Colombo’s The Sunday Times said in an editorial, recalling “the precious ration card which provided every family with limited subsidised quantities of rice, sugar, kerosene, flour, and dhal; the endless queues for bread and cloth; and the draconian foreign-exchange controls and exit permits. Senior citizens may well recall how they had to wait anxiously for the next ship to arrive with their food”.

The ban on chemical fertilisers in March, when President Rajapkasa announced that the country would grow only organic food henceforth, becoming the first country to do so, may aggravate the shortage, agricultural experts have said.

The move was aimed at saving foreign exchange in imports of these fertilisers, but it is feared that the sudden mid-crop change, without preparing the soil adequately, could adversely affect yields of vegetables and rice.

Excerpt: The Made In India Manager by R Gopalakrishnan and Ranjan Banerjee

Aretha Franklin’s estate paid $3M in back taxes to IRS

India to seek clarity on Russia waiver in 2+2 talks