The Centre and the Tamil Nadu Governor’s office have left a decision on their release to each other. A look at the seven convicts, their role in Rajiv Gandhi’s assassination, what has changed for them, and what hasn’t. A series of recent developments have brought the spotlight back on the convicts in the Rajiv Gandhi assassination case, with authorities passing the buck on who will take a decision on pleas for their release.

On January 22, the Centre told the Supreme Court that the Tamil Nadu Governor was set to take a call on convict A G Perarivalan’s release (the Supreme Court had in 2018 asked the Governor to take a decision as he “deemed fit” on a pardon plea by the Tamil Nadu government). Then on January 25, the Governor’s office left to President Ram Nath Kovind to take decision on pardon of all these convicts. And last week, the Centre told the court that “the proposal received by the Central government will be processed in accordance with the law”.

The TADA trial court had initially sentenced 26 people to death. In 1999, the Supreme Court upheld the conviction of only seven, releasing all others. The SC order observed that none of those convicted was part of the nucleus of the assassination team.

What the seven convicts were accused of, and what they are doing now:

Daughter of a nurse and a police officer in Chennai, Nalini, now 54, graduated from a prominent Chennai college.

Among the seven convicts, she was the only one present at the assassination spot in Sriperumbudur when Rajiv Gandhi was killed. Later, photographs showed Nalini with the alleged assassins before Rajiv Gandhi’s arrival.

After the killing, Nalini and Murugan (Accused No. 3) left Chennai and hid out in various places for more than a month until their arrest. Nalini was then pregnant. A daughter was later born and raised in prison until age five. The family of another prisoner took the child to Coimbatore and took care of her school education. Later, the girl was united with Murugan’s mother in Sri Lanka and migrated to the UK, where she is a doctor now.

Nalini and Murugan have never met their daughter after she left prison, said Nalini’s counsel M Radhakrishnan. They keep in touch through letters; prison norms prevent the parents from making international or video calls. 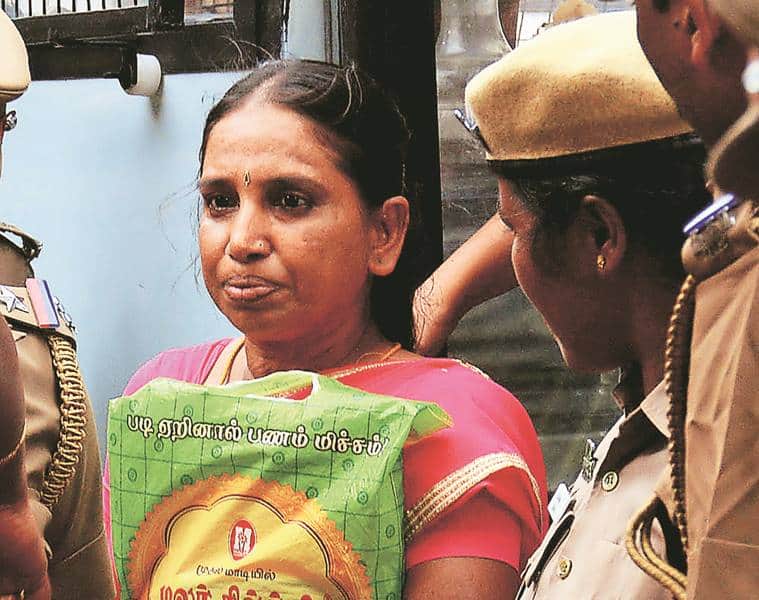 Until Covid-19 restrictions were enforced, Nalini and Murugan used to meet once a fortnight for about 15 minutes. Her counsel said Nalini is suffering severe trauma and often acute depression.

The Supreme Court verdict in 1999 observed that Nalini was an obedient participant with no key evidence to establish she was part of the conspiracy. “… She wouldn’t have dared to retreat from the scene as she was tucked into the tentacles of the conspiracy octopus from where it was impossible for a woman like Nalini to get herself extricated,” it said.

The Supreme Court in a majority order sentenced her to death (the dissenting judge was Justice K T Thomas, who headed the Bench). In 2000, the sentence was commuted to life following a plea by Sonia Gandhi, Rajiv’s wife.

Santhan, a Sri Lankan citizen, is deeply immersed in Hindu belief, and is in charge of rituals at a temple inside Vellore Central Prison. He is out of touch with his family in Sri Lanka for several years, and does not have an active legal team to take up his case either.

According to court documents, Santhan is believed to have fled then strife-torn Sri Lanka in 1991 and reached India by boatr, along with Sivarasan (who led the assassination team and was never caught alive) and a few others. According to the Supreme Court order, his role in the killing was direct and active. He was one of those initially sentenced to death — along with Perarivalan, Nalini and Murugan — before their sentences were commuted to life.

Nalini once recalled that Murugan was one among Sri Lankan youth who fled the country and reached Chennai hoping to go abroad. He was her brother’s friend, and stayed at their home briefly. Once, when Nalini quarrelled with her mother and left home, it was Murugan who intervened to bring her back. Their friendship evolved into a deeper relationship. Nalini’s first meeting with Sivarasan was through Murugan.

Like Santhan, Murugan too has become deeply religious and wears a beard now. In February 2013, this correspondent met Murugan, then still on death row, at Vellore Central Prison and asked him what he would do if released. “I will buy a piece of land at the foothills of a mountain where I will plant 100 flowering plants and medicinal herbs,” he said.

Another Sri Lankan citizen, Robert Payas, now 55, had come to India with his wife and sisters in September 1990. He is believed to have had links with the militant group LTTE.

Payas was also accused of a close association with Sivarasan. While the court took note of his involvement in the conspiracy, it observed he was also a man who faced atrocities from the Indian Peace Keeping Force (IPKF) in Sri Lanka and had lost a child in its actions.

Brother-in-law of Payas, Jayakumar had reached India along with Payas. The prosecution accused him of serious involvement in the killing citing his close association with Sivarasan. Jayakumar was also a victim of alleged atrocities during IPKF action in Sri Lanka.

An Indian national who was close to the Tamil Eelam movement in the 1980s, Ravichandran is said to have had close links with LTTE leaders before the armed group was actually formed. Prosecution charges said Ravichandran also knew Sivarasan and had visited Sri Lanka several times in the mid-1980s via sea. In fact, several leading politicians from Tamil Nadu had visited LTTE strongholds in Sri Lanka during the period. However, conspiracy charges against Ravichandran were struck down in 1999 by the Supreme Court which also suspended TADA provisions from the case.

Ravichandran was granted 15 days’ parole by the Madras High Court early last month on a petition filed by his mother.

Perarivalan alias Arivu was 19 when he was arrested in June 1991. He was accused of having bought two battery cells for Sivarasan.

During the probe, one piece of evidence was a decoded radio message sent on May 7, 1991 by Sivarasan to LTTE leader Pottu Amman in Sri Lanka: “Our intention is not known to anybody except us three.” While conspiracy charges against many others including Nalini and Ravichandran were dismissed by the Supreme Court, it upheld the conspiracy charges against Perarivalan as the Bench found it “believable” due to his TADA confession statement, which was taken by a CBI SP in custody.

While the Supreme Court verdict dismissed charges under TADA provisions, it took into account Perarivalan’s confession taken under TADA while sentencing him to death. He remained on death row for 23 years, until early 2014. An avid reader and a student who earned educational qualifications while in prison, he did not slip into depression.

He has always claimed innocence. Then in November 2013, V Thiagarajan, a CBI SP by then retired, said he had altered Perarivalan’s statement in custody to make it read like a confession. Thiagarajan made this statement by affidavit in the Supreme Court.

During a meeting in jail in 2013, Perarivalan, then on death row, told this correspondent that there are many like him in prisons across the world. “We are victims of a system that hands out disproportionate punishment because we are linked to high-profile cases.”

No major mutation in Covid-19 virus in India, confirms PMO

Vikrant Massey: My best is yet to come, people have been really kind in 2020