Infection numbers are declining in a number of cities and states, but does this really mean a decline in the pandemic? What are the best indicators for assessing a decline or flare-up? A look at the importance of measures such as test positivity and case fatality ratio in assessing the progression of the epidemic. The second surge in the pandemic has been rather alarming. The number of positive cases has been rising in much of the country, in urban as well as rural areas, since the middle of March. A silver lining is that the numbers are declining in the three metros that first faced the surge, Delhi, Mumbai and Pune, and possibly in some states too. Is this decline real, or is it simply an artefact of fewer tests being performed, or incorrect or missing numbers? The answer is very important of course, since the easing of restrictions and the resumption of normal activities critically depends on it. And the best answer would be the one most driven by data, rather than by anecdotal evidence and wishful thinking.

Do we have enough data?

The current pandemic is one of the most data-rich global health crises in history, and this is true for India as well. As concerned citizens, we would like to use this data to answer questions such as:

How many should be tested?

In a standard Test-Trace-Treat strategy, this can be answered as follows: Let one individual, let’s call him Mr X, test positive (Test stage). Next, health workers will speak to Mr X and find out everyone he has been in contact with (Trace stage). Suppose Mr X has come in contact with 20 people. He spent a lot of time with 5 of them (high risk) and briefly met the others (low risk).

Test positivity is a good benchmark at the earliest stages of the epidemic. Once the infection has spread sufficiently through the population, the chain of infection is no longer clear. Then if Mr X went to the market and caught the infection from who-knows-where or passed on the infection to God-knows-who, the test positivity may not reduce even when the number of tests is increased. This is a bad situation of course, since it is indicative of widespread infection, with many asymptomatic cases.

Can we improve on test positivity as an indicator?

As we saw, test positivity by itself does not give enough information to understand the progress of the epidemic at all stages. Moreover, there can be many infected people who are asymptomatic and who therefore remain undetected. Such asymptomatic people can infect others, and it is necessary to estimate their number to understand the progression of the epidemic. That is where the Case Fatality Rate (CFR) comes into play.

Let us say the IFR for Covid-19 is 0.3%. This means out of every 1,000 infected people, 3 are likely to die. If the CFR is 1%, out of 300 identified infections, 3 people have died. The implication is that around 700 Covid-19 positive people have not been identified. If CFR were 2%, 6 people would have died, which would require an underlying population of 1,400 infected but undetected people. This is a hypothetical example, but it illustrates the fact that the higher the CFR, the greater the number of unidentified infections.

So, what have we learned?

A simple analysis of more or less readily available pandemic data tells us the following:

High test positivity and low CFR: The infection has spread through the population, but the health system is responding well, keeping deaths low. The number of unidentified positives is not high. But this could also imply under-reporting of deaths, which needs to be investigated.

Low test positivity and low CFR: The epidemic is likely under control.

Pune has been one of the worst affected cities in India. The availability of data makes it easy to analyse, based on the above reasoning, how the city handled the epidemic. Figure 1 compares the weekly positive cases against test positivity in Pune from April 2020 until May 2021. In the very beginning of the pandemic, test positivity was fairly high even though the number of cases was low, indicating that there were a large number of unidentified cases by early April 2020 itself. It is likely that only the high-risk contacts were being tested due to limited availability of tests. 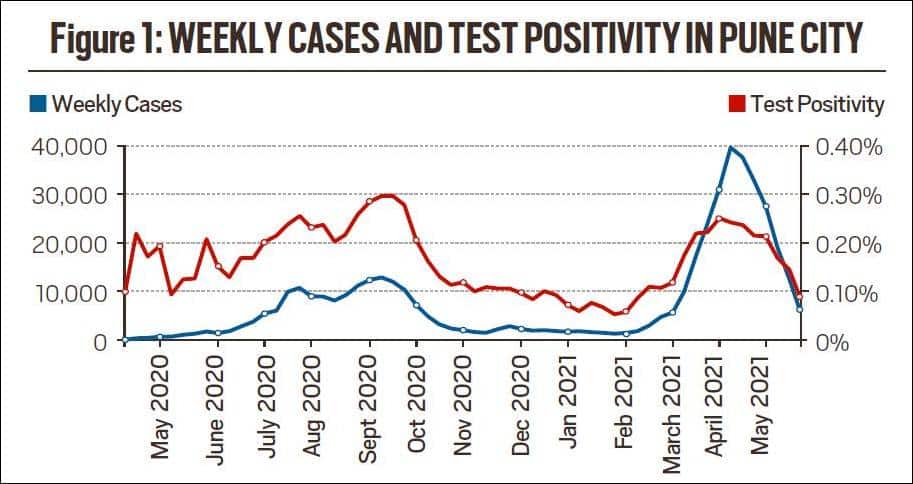 During the peak of the first wave, the test positivity shot up to really high levels, indicating that the spread of the infection was quite large and that the testing capacity was simply not sufficient. While the number of cases dropped quite sharply in October, the test positivity dropped but remained fairly steady at around 10% until nearly the end of December, indicating that there was a latent infection load in the population that never really went away. The test positivity reached its lowest values in January 2021, but started to rapidly increase in the first week of February, before the increase in cases themselves, thus providing a forewarning. 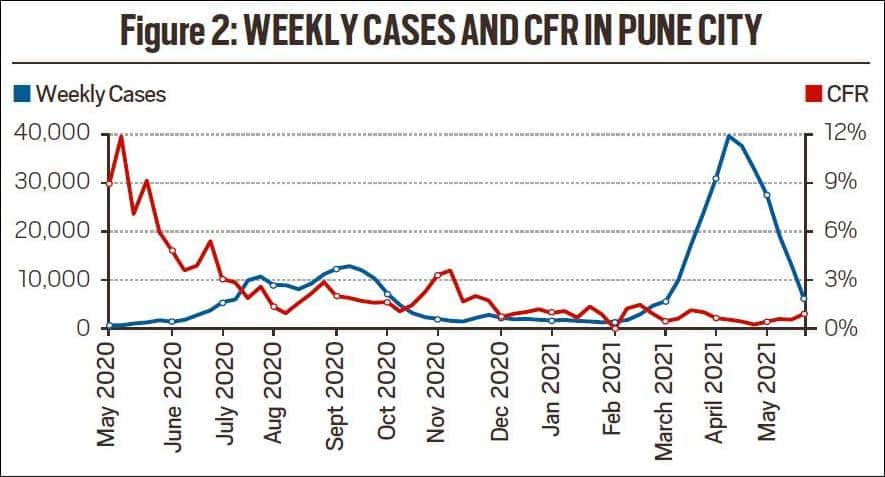 Figure 2 shows that the CFR paints a similar but complementary picture. The high CFR in May 2020 indicates that the spread of Covid-19 was much higher than what the cases indicated, and the lack of preparedness of the health system. The CFR remained constant between mid-July and mid-October 2020, then started rising again. This again points to the fact that the peak of the epidemic was likely reached in mid- to late October rather than mid-September as the number of cases suggests.

The CFR has remained flat and fairly low since December 2020, again underscoring the fact that Pune’s health system has performed much better this time around, which is remarkable. However, the slight increase in CFR beginning in late April 2021 reminds us to be vigilant to ensure that the CFR does not start rising again.

The above analysis also highlights the necessity of transparent data sharing by the administration. The drop in the number of cases in October lulled us into a sense of safety that was not really supported by other measures such as test positivity and CFR. Crises demand collective action by the citizenry, and we must ensure that all relevant information is available so that we can make the best possible decision in these uncertain times.