This single doesn’t really focus on subjects like self love, bullying, depression etc that are prominent themes in the group’s previous songs. 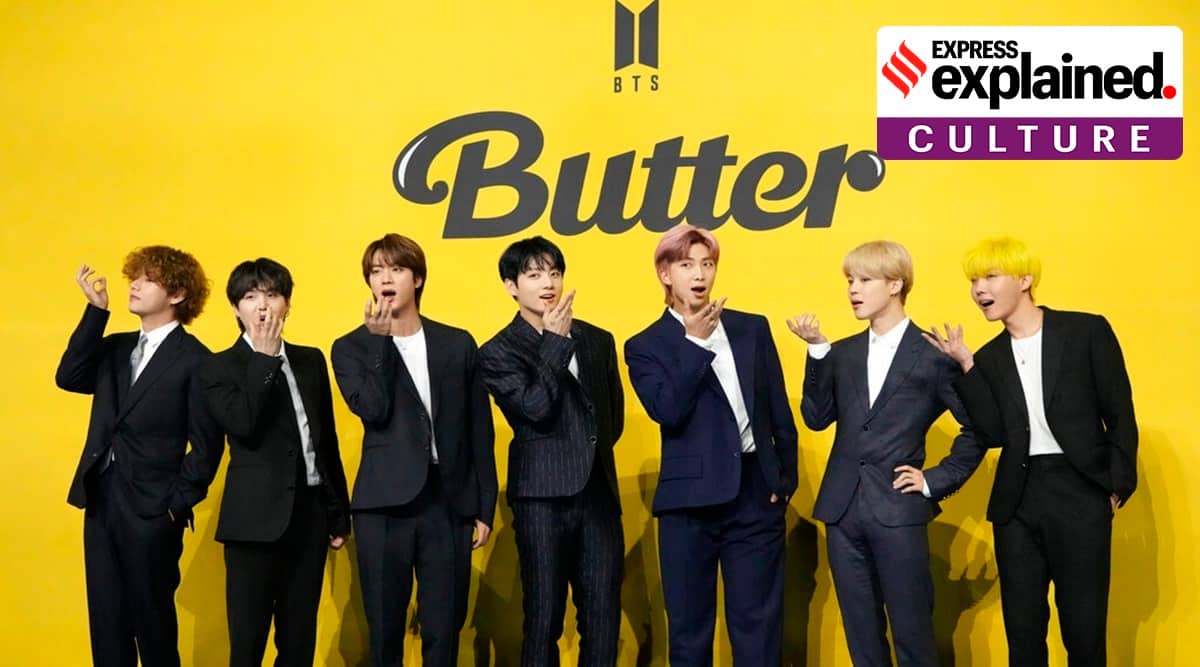 It would be somewhat of an anomaly if BTS did not break music records immediately after the K-pop group released a new song. Their latest English single ‘Butter’, released on May 21, became the fastest video ever on YouTube to hit 10 million views, surpassing the group’s own records with last year’s ‘Dynamite’. The group’s global fandom that calls itself ‘ARMY’ propelled the rapid increase in views on digital platforms.

What is BTS’s ‘Butter’ about?

This single doesn’t really focus on subjects like self love, bullying, depression etc that are prominent themes in the group’s previous songs. At a press-conference in Seoul on Friday, the group had said they had intentionally created a light-hearted song.

“If you hear the title ‘Butter,’ you know immediately that we tried to prepare a song that’s easy listening, instead of [something with] a really heavy or profound message,” group member Jimin had said at the press conference. Explaining the song title, he had said: “This is a little embarrassing, but it’s something smooth like butter, that really melts into and grabs hold of you. It’s a very cute song, sort of a confession.”

There aren’t complex themes going on in ‘Butter’, the group members had said in the press conference. “ ‘Butter’ is very simple. It’s getting warmer and will get hotter, and we hope that you can spend a fun summer with BTS,” group member Jungkook had said.

What does BTS have to say about the song?

The group hopes that this song might finally be their chance at winning a Grammy Award, a long-standing goal of the group. BTS had earned their first Grammy nomination in the Best Pop Duo/Group Performance category for their 2020 disco-pop track ‘Dynamite’, but had ultimately lost to Lady Gaga and Ariana Grande for their single ‘Rain On Me’.

When ‘Butter’ released, the song writing credits featured names of a group of people who would help them achieve those goals: Alex Bilowitz, Sebastian Garcia, Rob Grimaldi, Stephen Kirk, Jenna Andrews and Columbia Records chairman Ron Perry, who has also been credited as a producer—all familiar names for observers who closely track the US’s popular music industry.

BTS’s RM had told Apple Music that ‘Butter’ was the result of the global Covid-19 pandemic that has shown no signs of ending. “We never actually expected that we were going to release another single, but the virus is getting longer and longer so we thought we need another summer song. We thought we needed another summer number, and Butter was perfectly fit for that. And now we’re here,” RM had said.

What is the music video about?

While the video opens with black and white, it transitions into the dominant colour theme in the three-minute song which is, obviously, yellow. The video ends with rapper Suga eating what appears to be a chunk of butter off a fork. While the choreography and set design are unique to this song’s themes, they are reminiscent of the fun pop colours and mood of ‘Dynamite’, along with the choreography that includes portions where the members go freestyle inside an elevator.

The decision to include freestyle moves in the final video was addressed by group member V in the press conference: “They’re freestyle dances that we came up with on set. We ad-libbed them. We chose what we could express ourselves best and really immersed ourselves.” “We tried to put in a lot of those emotions — kissing your hands, (giving) a mischievous look, or brushing our hair back..(are the) highlight,” J-Hope had said, describing the choreography.

Andhra Bank Board to discuss merger

Govt. to work on relief package for telcos

Attakkalari’s first ever workshop and audition in Thiruvananthapuram