Sunday’s drone attack in Jammu underlines an emerging threat as well as a need to build capacity in this field. How is India placed in drone technology and offensive measures to counter such attacks in future? 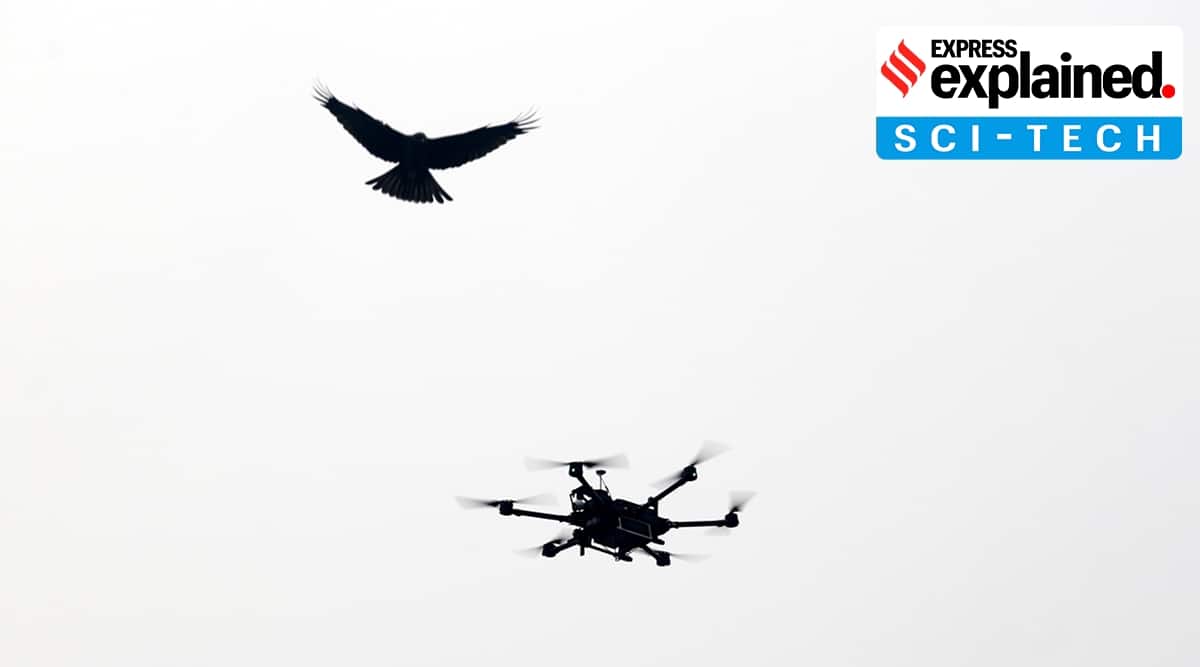 In the early hours of Sunday, two drones dropped an IED each packed with high grade-explosives on an Indian Air Force base in Jammu. One IED broke through the roof of a building while the other dropped a few yards away, injuring two IAF personnel. It was the first-ever attack in India where suspected terrorists had used drones.

Army Chief General M M Naravane emphasised this new threat on Thursday and said DIY (do it yourself) drones can be easily accessed and used by state and non-state actors, and India is building its offensive and defensive capabilities to prevent such attacks.

Since when have the military and terrorists been using drones?

Over the last one decade, drones, or unmanned aerial vehicles (UAVs), are being increasingly used for law and order, courier services, and surveillance and attack in the military domain. Modern drones are being used militarily since the 1990s, including by the US during the Gulf War.

UAVs range from 250 g (maximum altitude 2,000 ft and range 2 km) to over 150 kg (300,00 ft and unlimited range). In India, the most commonly known drones are quad- and hexacopters used for civil and commercial purposes, and Heron drones used for military surveillance. Different UAVs operate under various technologies ranging from remote control by a human operator to using GPS and radio frequencies, and autopilot assistance.

According to Association of the US Army (AUSA), the first attempted drone attack by a terror group can be traced to 1994 when Aum Shinrikyo, a Japanese doomsday cult, used a remote-controlled helicopter to spray sarin gas, but failed as the helicopter crashed.

In 2013, al-Qaeda attempted an attack in Pakistan using multiple drones but security forces prevented it. The Islamic State has regularly used drones for attacks in Syria and Iraq, while the Taliban has used them for surveillance in Afghanistan. Hezbollah and Houthi rebels too have used them for attacks.

In January 2018, a swarm of 13 drones attacked two Russian military bases in Syria. In August 2018, an assassination attempt was made on the President of Venezuela, Nicolãs Maduro, using two IED-carrying GPS-guided drones that exploded during a military ceremony the President was attending.

According to AUSA, between 1994 and 2018, more than 14 planned or attempted terrorist attacks took place using drones. These have only increased in the last couple of years.

Last year, drones were used to counter traditional platforms like tanks in the Armenia-Azerbaijan war. Naravane referred to it on Thursday and said the “imaginative and offensive use of drones, riding on (Artificial Intelligence) algorithms, first in Idlib and then in Armenia -Azerbaijan, have challenged the traditional military hardware of war: the tanks, the artillery and the dug in infantry”.

In the last few years, India and its enemies have frequently used drone surveillance against each other. The last three years have also seen drones dropping weapons, ammunition and drugs. On May 14, the BSF detected weapons dropped by a suspected Pakistan drone in Jammu. One AK-47 assault rifle, one pistol, one magazine, and 15 rounds for a 9 mm weapon were recovered 250 m inside Indian territory.

Sources said in recent years there have been an estimated 100-150 sightings of suspected drones near India’s western border annually. Most of these are suspected to be surveillance drones.

How to tackle them?

The entire world is struggling with the problem of drone attacks. Conventional radar systems are not meant for detecting small flying objects, and, even if they are calibrated that way, they might confuse a bird for a drone and the system may get overwhelmed.

Currently, border forces in India largely use eyesight to spot drones and then shoot them down. It is easier said than done as most rogue drones are very small and operate at heights difficult to target.

India has been exploring technologies to detect and disable drones using electromagnetic charge or shoot them down using laser guns. Technology to disable their navigation, interfere with their radio frequency, or just fry their circuits using high energy beams have also been tested. None of these has, however, proven foolproof.

“One would ideally like to have a tech wall that can disable drones coming from across the border. But drone attacks can be launched from within as well. Then there is the problem of swarm drones, where scores of drones overwhelm and confuse detection systems, resulting in some of the drones sneaking through,” a security establishment officer said.

What are the other challenges in tackling small drones?

A senior armed forces officer, who has worked on UAV projects earlier, said the use of small drones to attack is a “totally different spectrum”. Drones have control and delivery mechanisms, and to counter them, he said, “either you can counter the control mechanism by jamming, or can control the delivery mechanism”. It depends on what kind of radar is being used, which is critical for the size of the UAV that needs to be detected.

“When you have to look at any kind of counter-strategy, it should give you enough warning to positively identify that it is not a bird, to fire. If you are firing, you don’t know what it is carrying.”

He said it raises multiple questions, like who (the armed forces or the civilian forces) would be responsible for such mechanisms. “It is a sub-tactical threat, but requires a strategic response. Entire threat perception has to be relooked.”

Does India have anti-drone technology?

The Defence Research and Development Organisation (DRDO) has developed a detect-and-destroy technology for drones, but it is not yet into mass production. Then there is the challenge of the technology’s strategic deployment and the money the government is ready to spend.

The DRDO system, developed in 2019, has capabilities for hardkill (destroying a drone with lasers) and softkill (jamming a drone’s signals). It has a 360° radar that can detect micro drones up to 4 km, and other sensors to do so within 2 km. Its softkill range is 3 km and hardkill range between 150 m and 1 km.

It has been demonstrated to various security agencies including at the Hindon Air Force station in January 2020 and National Security Guard Manesar in August 2020 and again in January 2021.

What are India’s plans to use them in warfare?

The armed forces have been slowly inducting capacity. Last year the, Navy got two unarmed SeaGuardian Predator drones on lease from the US. The three forces want 30 of these UAVs between them.

The military has been working towards using small drones for offensive capabilities as well. On January 15, during the Army Day parade, the Army showcased its swarm technology, with 75 drones swarming together to destroy simulated targets. The Army Chief mentioned this on Thursday and said the “display of pre-programmed drones destroying a variety of simulated targets is reflective of our seriousness and focus on this emerging technology” and added that “much work is underway in this direction to operationalise the capability in different terrains, at varying altitudes and over extended ranges”.