A look at why Assam has traditionally been flood-prone, what measures have been taken over the years, and what has been proposed as a long-term solution 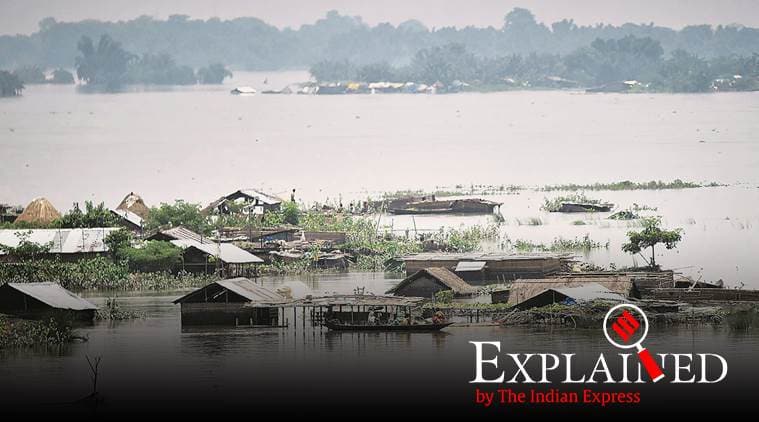 Assam is in the grip of yet another flood, with 57 lakh people displaced, all 33 districts affected, and 36 people killed besides hundreds of animals. This is the first wave of floods this monsoon, and flood control experts expect at least two more. A look at why Assam has traditionally been flood-prone, what measures have been taken over the years, and what has been proposed as a long-term solution:

Why are floods so destructive in Assam?

Apart from incessant rainfall during the monsoon, there are many contributory factors, natural and man-made. At the crux is the very nature of the river Brahmaputra —dynamic and unstable. Its 580,000 sq km basin spreads over four countries: China, India, Bangladesh and Bhutan, with diverse environments.

The Brahmaputra features among the world’s top five rivers in terms of discharge as well as the sediment it brings. At 19,830 cubic meters per second (cumec), it ranks fourth in discharge at the mouth, behind only the Amazon (99,150 cumec), the Congo (39,660 cumec) and the Yangtze (21,800 cumec), according to data from a 2008 research paper by retired Gauhati University professor Dulal Chandra Goswami, an environmentalist acknowledged as an authority on the Brahmaputra. In terms of sediment yield, two spots along the Brahmaputa’s course were at second and third places in 2008, behind the Yellow River whose annual sediment yield is 1,403 tonnes per sq km. The Brahmaputra’s annual sediment yield was 1,128 tonnes per sq km at Bahadurabad of Bangladesh, and 804 tonnes per sq km at Pandu of Guwahati. How do these characteristics of the river relate to flooding?

The vast amount of sediment comes from Tibet, where the river originates. “That region is cold, arid and lacks plantation. Glaciers melt, soil erodes and all of it results in a highly sedimented river,” said Dhrubajyoti Borgohain, a retired chief engineer of the Brahmaputra Board, a central government body functioning under the Jal Shakti Ministry’s Department of Water Resources, River Development and Ganga Rejuvenation, and whose responsibilities include flood control in the Brahmaputra basin. By the time the river enters Assam — a state comprising primarily floodplains surrounded by hills on all sides — it deposits vast amounts of this silt, leading to erosion and floods. “As the river comes from a high slope to a flat plain, its velocity decreases suddenly and this results in the river unloading the sediment,” said Borgohain. The river’s channels prove inadequate amid this siltation, leading to floods.

Again, because of the earthquake-prone nature of the region, the river has not been able to acquire a stable character. Following the devastating earthquake of 1950, the level of the Brahmaputra rose by two metres in Dibrugarh area in eastern Assam.

Besides these natural factors are the man-made ones — habitation, deforestation, population growth in catchment areas (including in China) — which lead to higher sedimentation. For example, the sediment deposition itself creates temporary sandbars or river islands. 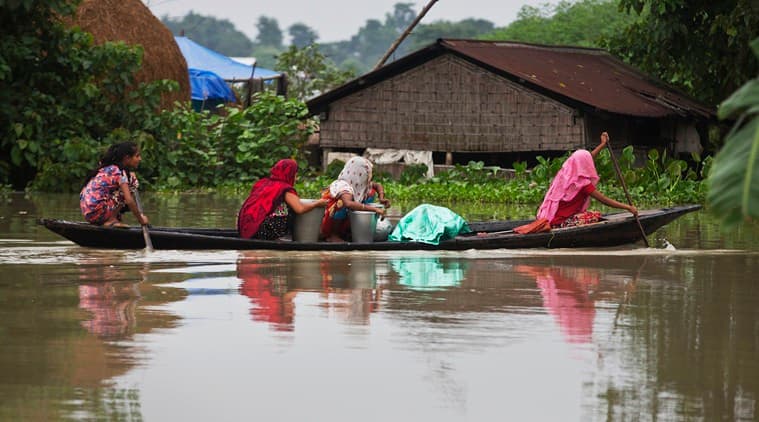 It is common for people to settle in such places, which restricts the space the river has to flow. When rainfall is heavy, it combines with all these factors and leads to destructive floods. This happens very frequently.

How bad is the current flood compared to previous ones?

While floods are a regular annual feature in Assam, some years witness more destruction than others. In terms of impact on human lives, the floods of 1988, 1998 and 2004 were the worst; the 2004 floods alone affected 12.4 million people and claimed 251 lives. The current wave of floods has affected 57 lakh people and claimed 36 lives so far. But experts say that the worst is yet to come.

“This is only the first major flood wave this season. We are expected to experience two to three more flood waves until the end of the rainy season, which will last till mid-October. In terms of total annual scale and effect of flooding, we had seen worse floods in 1988, 1998, 2004 and 2012. But if a few more large flood waves hit the state in the next two-and-a-half months, this year could well be recorded as one of the most severe flood years,” said Partha J Das, who heads the Water, Climate & Hazard Division of Guwahati-based Aaranyak.

Has the government tried to address the factors that cause floods?

In its master plan on the river in 1982, the Brahmaputra Board had suggested that dams and reservoirs be built to mitigate floods. The idea of dams, however, has traditionally been a double-edged sword. While one of their objectives is to regulate the release of flood waters, the release when it comes can sometimes be beyond the capacity of the channels downstream. In the Brahmaputra basin, locals and environmentalists protested against dam-building plans on grounds of displacement and destruction of evology, preventing the plans from moving forward.

“The Brahmaputra Board proposed a multipurpose dam in the present Gerukamukh site where NHPC (National Hydroelectric Power Corporation) is constructing the Subansiri Lower Hydroelectric Project. But the proposal was scrapped because of objections by the Arunachal government due to submergence [concerns], which included a few small towns as well,” said Guwahati-based environmentalist and engineer Pradip Kumar Bhuyan. In fact, the Subansiri project — on which the government spent crores — too has been suspended. 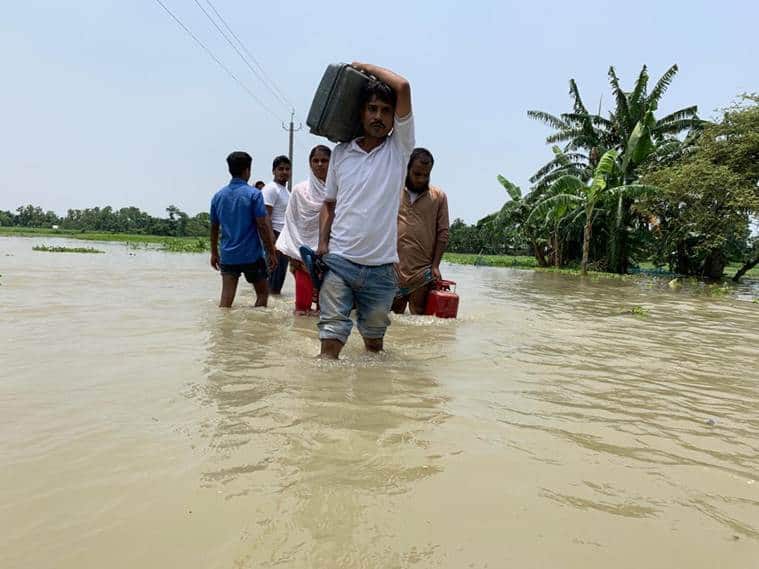 As such, the government has been using only one approach towards floods: building embankments on the river. “Embankments were proposed only as an interim and ad hoc measure for short-term mitigation,” said Aaranyak’s Das. Their lack of durability has often been on display.

“Most embankments built in the 1980s are not strong enough. Since they were temporary measures, the government did not spend on high-specification embankments. These are weak and are regularly breached,” a government official said.

The government also considered dredging, basically digging up the riverbed and making the river “deeper”. However, experts have strongly advised against this simply because the Brahmaputra sediment yield is among the highest in the world. “Experts believe that even if we take out all the silt this year, more silt will be deposited the following year, making the very expensive effort futile,” said Borgohain, the retired Brahmaputra Board engineer.
Dr Goswami, the retired Gauhati University professor, feels that the government’s measures have been “piecemeal” and “short-term”.

“They are not addressing the problem at the source — they are firefighting,” Dr Goswami said.
But, is there a long-term solution?

Dr Goswami said that for a sustainable solution, there needs to be “a basin-wide approach” to the problem. He calls this an “integrated basin management” system that should ideally bring in all the basin-sharing countries on board. “Addressing the issues only in Assam when the flood strikes isn’t the solution — one needs the countries to come to an understanding about taking measures in the catchment areas.” For that, interstate relationships, political cooperation and the role of the government are important.

Borgohain suggested “flood-plain” zoning, which is done the US. “Depending on the vulnerability of the area, you divide them into categories, and accordingly ban certain activities on it: like farming, building a house etc,” he said, “That is one option. We can’t help the rain but we can certainly control the damage caused by floods.”

Rupee slips 9 paise to 68.80 against USD in early trade

Citizen birding during a pandemic: The near and the far of it