‘A political party taking the law into its hands is objectionable, especially in the context of the 2002 incidents in Gujarat.’ 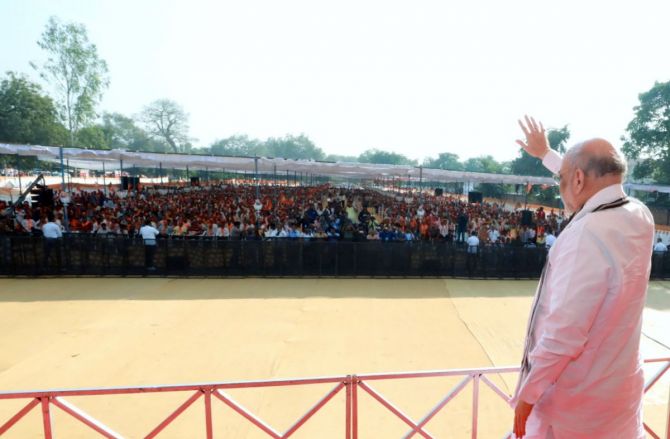 Former IAS officer E A S Sarma has approached the Election Commission of India over Union Home Minister Amit Anilchandra Shah’s speech at an election rally in Gujarat in which he said that perpetrators of violence were ‘taught a lesson’ in 2002 — a reference to the Gujarat riots that year — and asked the ECI to ascertain the veracity of the remarks and take action if necessary against Shah under the Model Code of Conduct.

In a letter to the ECI, Sarma — an IAS officer from 1965 to 2000, serving in among other senior positions as secretary to the Government of India in the power and finance ministries — referred to news reports of an election rally held in Mahudha town in Kheda district where Shah reportedly said, ‘During the Congress rule in Gujarat (before 1995), communal riots were rampant because perpetrators became habitual of indulging in violence due to the support they received from the Congress.’

‘But after they were taught a lesson in 2002, these elements left that path and have refrained from indulging in violence from 2002 till 2022. The BJP has established permanent peace in Gujarat by taking strict action against those who used to indulge in communal violence,’ Shah was quoted as saying.

During the 2014 Lok Sabha election, Shah had addressed election meetings in communally sensitive regions of western Uttar Pradesh, where he had exhorted voters to use the Lok Sabha elections to ‘seek revenge for the insult’ inflicted on them during the Muzaffarnagar riots of 2013 and allegedly asked the voters to uproot ‘Mullah Mulayam’s government’, a reference to the Samajwadi Party government then ruling UP.

The Election Commission’s “functioning should be far more transparent than what it is now,” Sarma tells Syed Firdaus Ashraf/Rediff.com in an e-mail interview:

What did you find so objectionable in Home Minister Shah’s speech that you felt compelled to write to the Election Commission of India urging it to take action?

My letter dated 26-11-2022 is self-evident. If the statement as reported is correct, it amounts to saying that a political party ‘has taken strict action against those who used to indulge in communal violence’, which in turn amounts to doing something which ought to have been done by the law-enforcing agencies of the State, in accordance with the relevant laws.

A political party taking the law into its hands is objectionable, especially in the context of the 2002 incidents in Gujarat.

Amit Shah said that the rioters were taught a lesson in 2002 after which they refrained from indulging in violence. He nowhere mentioned any community or named any individual. So how does it fall under the purview of the Model Code of Conduct?

This is for the ECI to investigate, taking into account the background of the 2002 communal incidents.

Amit Shah said the Congress backed perpetrators of violence before 2002 and the BJP established peace. What is objectionable in it?
Don’t you feel Amit Shah was highlighting the failure of the Congress’s governance policies, which is his right as they are his opponents?

As above. Irrespective of what other political parties are responsible for, the subject of my letter was specific, with regard to MCC violations now

Shiv Sena supremo Bal Thackeray had made a communal speech during the 1987 election and it was only 12 years later, in 1999, that the Election Commission took action by stripping him of his voting rights and barring him from contesting elections.
In such a scenario, what action do you think will be taken on your complaint, and how soon?

I cannot predict the ECI’s action.

Visiting mosques, churches and temples are also not allowed during election time, but today in India every political party is outdoing the other in its temple reach.
In such a scenario, what should the Election Commission do?

The ECI has the responsibility of enforcing the MCC, the provisions of which are unambiguously clear.

In the 2019 elections, Prime Minister narendra Modi famously said at his Balod rally in Chhattisgarh that the Congress was weakening the Indian Army. Chief Minister Bhupesh Baghel complained to the Election Commission, but nothing happened. Do you agree with the EC not taking any action in the case?

The ECI is expected to act independently and judiciously.

Has the Election Commission of India lost its spine? Even the Supreme Court said recently that a T N Seshan was being missed. Why don’t we see such election commissioners now?

The procedure for the appointment of the election commissioners needs to be made transparent, preferably with a member of the higher judiciary heading it.

It is not a good practice for such appointments to be made only by the executive.

The highest in the judiciary need to be involved in the selection of the election commissioners.

The Supreme Court said the Election Commissioner should not be a ‘yes man’ of the government, but ‘be independent and act independently’.
Against that backdrop, are you hopeful that the EC will initiate any action on your complaint?

I would prefer the ECI to be more independent than what it is now, for it to be able to act in line with what the Constitution expects it to do.

The Election Commission declined to share details of the violation of the Model Code of conduct by Modi with an RTI applicant. Will your complaint meet a similar fate?

I feel distressed that the ECI has not registered my letter and made a public disclosure of the status of action on it.

In my view, the ECI should pass a judicial order on such a letter and place it at its portal for anyone to see.

Its functioning should be far more transparent than what it is now.

Since 2004, no CEC has completed the full six-year tenure. During the 10 years of UPA, there were six CECs and in the eight years of NDA there have been eight. Will it help the cause of an independent CEC if s/he is assured a full tenure of six years?

It would help the ECI to remain independent, if there is a fixed tenure of at least three years, which should not be subject to extensions by the executive.

We find politicians of all hues indulging in name-calling and the like during elections. Has the Model Code of Conduct become ineffective or is it not being implemented properly?

In all such matters, the Representation of the People Act and the MCC should be the basis for ECI’s action.

Will it help if the punishment for violations of the Model Code of Conduct are made more stringent?

Punishments should be a deterrent.

How did political parties develop a sense of impunity over violating the Model Code of Conduct?

The election laws need to be amended to prevent political parties from accepting corporate donations altogether, giving tickets to candidates against whom courts have framed criminal charges and treating expenditure incurred by a candidate in excess of the prescribed limits as automatically deemed to constitute a ‘corrupt practice’ resulting in disqualification.

MCC should be given a statutory basis to make it statutorily binding.

The ECI’s orders should be placed in the public domain.

The amendments made by the present government to the Companies Act and FCRA (Foreign Contribution Regulation Act) are highly regressive and they have rendered election funding non-transparent, which in turn has led to eroding the credibility of elections.

Workers walking to MP get help

Violence over election of pradhans in Bengal