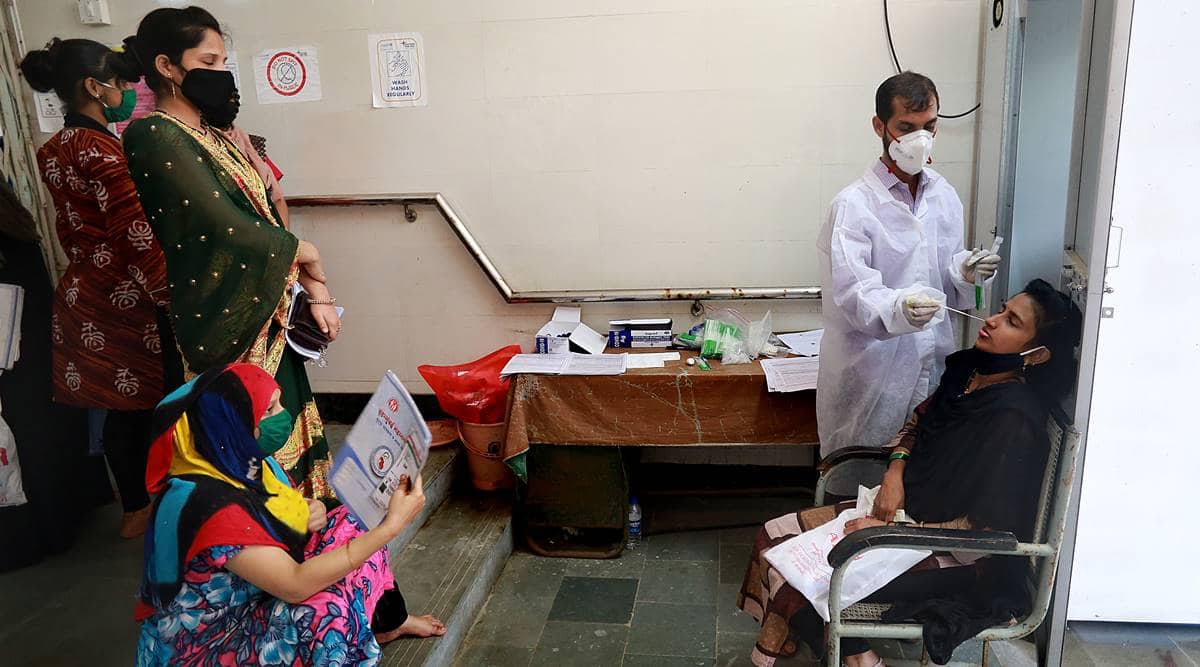 There is a reason why photographs of crowds, without masks and with little social distancing, at popular tourist destinations are being viewed with uneasiness — and concern.

Even as the second wave abates, the reproductive number, or R, an indicator of how fast the Covid-19 pandemic is spreading, has increased for the first time since the middle of April. This could be an early signal of an impending potential surge in number of cases.

The R-number, a mathematically calculated estimate which measures the number of people who are being infected by an already infected person, was declining until the last week of June.

As states ease the lockdown, opportunities for crowding and for potentially enhanced transmission will increase. R-values are early warning signals. The second wave peaked May 6 with over 4.14 lakh new infections. The highest value of R this year was estimated at 1.37 between March 9 and April 21.

But in the subsequent period, between June 20 and July 7, it has moved up significantly, shows the latest analysis by a team of researchers, led by Sitabhra Sinha at the Institute of Mathematical Sciences in Chennai, shows.

During this period, the R-value for the country as a whole was estimated by Sinha’s team to be 0.88, up from 0.78 for the period between May 15 and June 26. This means that every group of 100 infected people is, on an average, now passing on the infection to another set of 88 people, instead of a group of 78 earlier.

The source of consolation right now is the fact that the R-value is still below 1, but that could change very quickly. An R-value above 1 means more than one person is being infected, on an average, by an already-infected person, and that leads to a surge in cases.

In some crucial states, however, the R-value has already crossed 1.

In Kerala, the current R-value is estimated to be around 1.1. Kerala has been contributing nearly a third of all new cases in the country, and reporting between 11,000 and 13,000 cases every day when most of the other states have seen their daily case count go down.

Maharashtra, the other prominent contributor of fresh cases, is also estimated to have an R-value around 1, Sinha’s analysis shows.

“R is defined in terms of the rate of growth or decline of active cases. The decline in active cases has slowed down considerably in the last few days, and that is getting reflected in the estimation of R as well,” Sinha said.

In Kerala, the active cases have actually been increasing over the last week. The state now has the maximum number of active cases in the country, more than even Maharashtra. 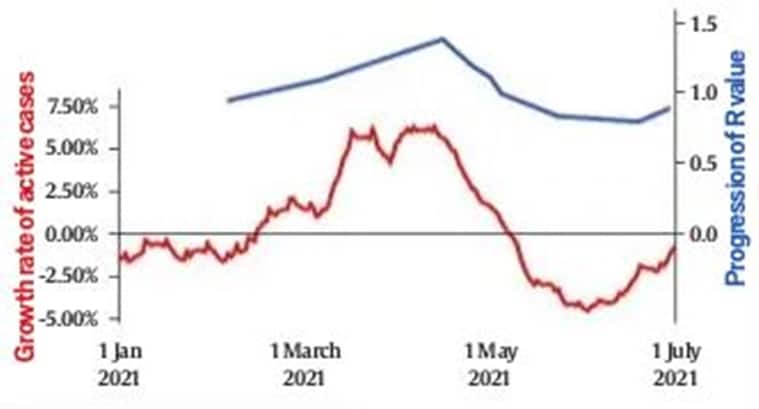 But even nationally, the decline in active cases has slowed down (see chart). The growth is still in the negative territory, meaning it is still on the decline, but threatening to cross the threshold.

Active cases had been declining by more than four per cent a day (7-day compounded daily growth rate) for most of June. But the decline began to slow down from the last week of June. As on July 9, the decline rate was only about 0.92 per cent.

The apprehension is that the crowds being seen at tourist destinations could easily turn into super-spreading events triggering another surge.

On Friday, Covid task force head V K Paul had said that the slow rate of decline – daily case detections still over 40,000 – “shows that we cannot take the situation for granted.”

Flagging the crowds at hill stations, Paul warned that localised surges were seen after the first wave too, and they could result in an explosion of the infection. “This is a warning to us that we should help the process of decline of this wave effectively to a much lower level to the baseline. The baseline has not yet been achieved. The baseline would be something below 10,000. This should be for three weeks at least,” he said. “…More than 35,000 cases per day is not a small number… It looks small in comparison to the high peak that we experienced, but the fact that the rate of decline is somewhat slow, tells us that if we don’t work hard on controlling the virus, it can take the upper hand.”

“We have to make sure that we don’t create opportunities for super-spreading events that will tip over the precarious balance and cause a third wave,” Sinha said.

Named after Sharad Pawar, govt to launch app for persons with disabilities