If India is to be one of the richest nations, it has to fashion trade deals. Modi may yet be the prime minister who liberates the Indian economy from its old shackles of protectionism and makes it as large and nearly as prosperous as the US economy. He can if he uses his friend Donald Trump well. 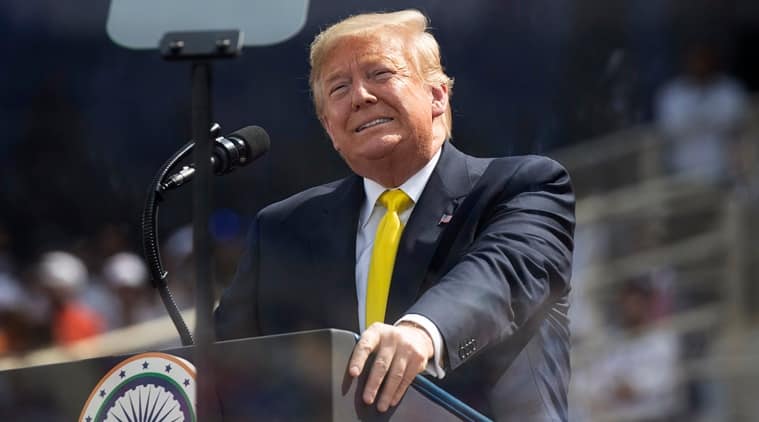 Namaste Trump was not as joyous as Howdy Modi. The sitting arrangement was too formal for the spectators to emote by dancing or jumping around. For an Indian tamasha, it was very quiet. But on the other hand, I am sure both sides breathed a sigh of relief that Donald Trump did not say anything which embarrassed his host or damaged America’s image abroad. The Hindi tweet after the event was a fine touch though, no doubt, carefully drafted and translated. Trump has enough problems with the Roman alphabet; Devanagari would have been too much.

The most striking aspect of the visit and the roadshow was that for the first though not the last time an American president thought it would help to be seen in India if he wants to get re-elected. India could become a regular stop in US presidential campaigns. India has arrived. No thanks to any government of India but the size and quality of the Indian diaspora in the US.

The earlier visit to Sabarmati Ashram will go down as a good photo event. In Motera stadium itself, Modi was his usual eloquent self but restrained in rousing the crowd to respond to his calls of “Bharat Mata ki jai”. His comparison of similarities between the US and India — Statue of Liberty and Statue of Sardar Patel, etc — would have sounded nice to American TV audiences if anyone was watching at 4:00 am (East Coast ) or at 1:00 am farther west.

It was Trump who gave a much better speech than usual. This was not his hardcore domestic crowd. He saw that his task was to make Indians feel better, so he was happy to flatter Modi. They do feel comfortable with each other. They both came from the outside, are reviled by their domestic liberal media (Trump more than Modi), both succeeded to the anger and despair of their critics, and continue to do so. Together, they will reach 2024 at the top of their countries.

Even so, Trump was more subtle, praising India’s tolerance and its multi-religious society more than once. He praised the democratic politics in both countries but also hailed India’s achievements in the economic sphere. There was a gentle dig at China that India had got this far without using coercion. India was given a high place in the Pacific Ocean theatre as that is the main area of likely conflict between China and the US. Trump, the salesman, boasted about the armaments he had sold to his friend. He praised the space programmes, though found the names Chandrayaan and Mangalayaan challenging. He even attempted to pronounce Vivekananda and almost succeeded. But then Obama did not do better with Indian names. Trump worked hard on his speech.

Modi can be happy that his friend Donald put on a big show for him. It does ultimately say to the world that India has reached a certain level, not so much for its moral leadership (as Nehru wanted) but for its tangible material achievements and its democracy.

Editorial: Modi and Trump seek to elevate the bilateral relationship to a higher level

The ultimate question is: What will all this lead to? There is the trade deal, but Trump’s style is to talk and talk about trade deals till he gets something really good for his side. Given the November date for the US presidential election and the crowded schedule Trump will have due to campaigning, it is more likely the deal will be signed in December than before.

But a deal is guaranteed. Trump went out of his way to emphasise how large a volume of trade each country has in the other. This is a mutually beneficial deal. India has suffered too long from the mistaken belief in self sufficiency and suspicion of foreign trade. The Congress wrecked the Indian economy in the first 30 years after Independence with the twin delusions of swadeshi and socialism. The BJP must not follow suit.

If India is to be one of the richest nations, it has to fashion trade deals. Modi may yet be the prime minister who liberates the Indian economy from its old shackles of protectionism and makes it as large and nearly as prosperous as the US economy. He can if he uses his friend Donald Trump well.

This article first appeared in the print edition on February 26, 2020 under the title “Two Together”. The writer is a British parliamentarian sitting in the House of Lords.

My bestie: ‘We get along like peas in a pod’

India vs Pakistan: India could face consequences if they pull out of match against Pakistan – Chetan Chauhan

Five Interesting Web Series to Catch up On Hotstar Now

Five Interesting Web Series to Catch up On Hotstar Now

Shaktimaan to return amid lockdown, confirms Mukesh Khanna
We and our partners use cookies on this site to improve our service, perform analytics, personalize advertising, measure advertising performance, and remember website preferences.Ok