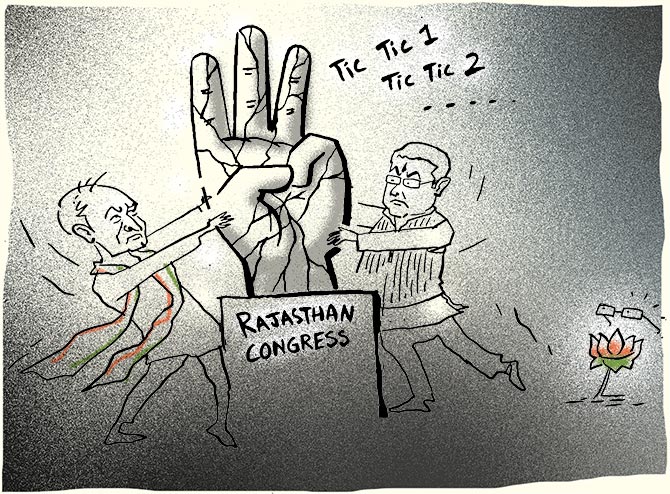 Dominic Xavier offers his take on the war within the Congress party in Rajasthan.

In one corner of the ring: Chief Minister Ashok Gehlot, the elderly warhorse who appears to have Congress President Sonia Gandhi and her son’s backing (remember, how Gehlot accompanied Rahul Gandhi on his temple run in Gujarat back in 2017?)

In the other corner, the dashing Deputy Chief Minister Sachin Pilot, inarguably the best young performer the doddering Congress party has in its ranks.

Pilot, who also heads the Congress party in Rajasthan, is clearly tired of playing second fiddle to Gehlot.

Sorry, godi media, Sachin may not join the BJP — he has, after all, seen how the earlier Congress rebel, a certain maharaj, is a kind of non-entity in the Modi-Shah phalanx; moreover, the BJP sarkar locked up his father-in-law and brother-in-law for months on end in Kashmir*.

Hopefully, Sachin’s revolt will finally jolt the Congress’s mother, son and daughter out of their political stupor and give Pilot the job he wants so badly.

What to do with Gehlot? Why not make him a party panjandrum in Delhi? 24, Akbar Road is full of Congress geriatrics like him with not much to do.

Indian women win against Poland, men lose to US

Maharashtra floor test: Walse-Patil steals the show, Sanjay Jagtap gets a round of applause