The Dravida Munnetra Kazagham men are in an upbeat mood in the Kolathur constituency and bullish about their party president M K Stalin’s re-election for the third straight time from this city segment which they say he nurtured for a decade though being in the opposition.

The DMK’s campaign appeared to be the most visible with propaganda at a feverish pace across the segment for the April 6 assembly polls and Stalin is the party’s chief minister candidate.

DMK’s electioneering is driven by several teams like a small group of men affiliated to the Labour Progressive Front, party’s trade union wing led by a man in his 50’s, who criss-cross the nook and crannies off Paper Mills Road holding LPF-DMK flags and distributing pamphlets.

“Support DMK for creating job opportunities and to protect the rights of workers,” he told a resident as ‘trade union people’ of the Centre’s rail coach making unit, Integral Coach Factory which is nearby, joined them.

Young women, separately go door to door giving away pamphlets that list out the ‘achievements’ of ‘Anitha Achievers Academy’, an initiative by Stalin to train students-free of cost- from middle, low income and poor families in accounting software, ‘Tally’ and tailoring.

“Over 500 students have been trained in Tally and all of them have been provided laptops free of cost and 395 women have learnt tailoring and got motorised sewing machines for free,” a woman who distributed the pamphlet proudly claimed.

‘Placements’ were also facilitated for them, she said.

The All India Anna Dravida Munnetra Kazhagam camp is counting on its government’s slew of welfare schemes and poll promises like free houses for those who do not own one and Rs 1,500 assistance per month to people and the ruling party is also pinning its hopes on its nominee Aadi Rajaram to take on Stalin.

A noted party warhorse once praised by late AIADMK supremo J Jayalalithaa for resolutely opposing not only rivals but also party backstabbers, ruling party men take pride in recalling that Rajaram gave Stalin a run for his money in the Thousand Lights segment in 2006 and the DMK leader managed to win by a whisker, a margin of 2,468 votes that year. 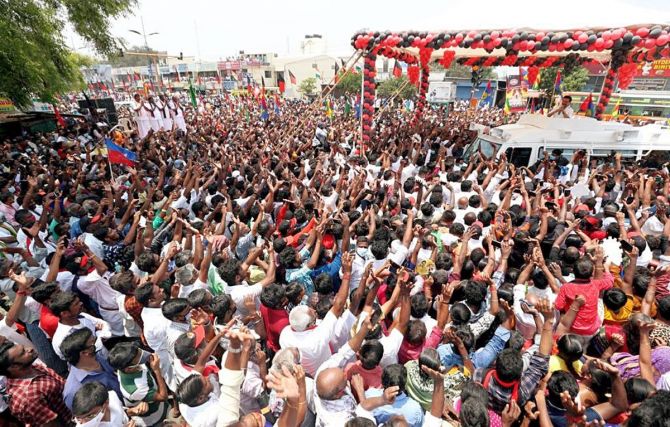 It was over a decade ago and now the people ‘desired’ Stalin’s leadership and he would win by a huge margin, DMK workers countered. They recalled Stalin’s promise that Kolathur would be developed into a model segment and ‘this will also be the CM’s constituency.’

The extent to which the DMK is focusing in this constituency could be gauged from the fact that a small stretch of Red Hills Road in Kolathur alone has two ‘Therdal Panimanai’ (Election work stations that teem with partymen) not to mention others.

Stickers with words ‘Stalin thaan vaararu, vidiyal thara poraru’ (Stalin is set to become CM and usher in dawn) with an image of a beaming DMK chief in the middle appeared in many places including over the name boards of shops. Shoulder bags used by partymen and a table calendar being distributed to people with similar content could not be missed.

At Constable Road in Ayanavaram, DMK men were seen listing out areas to be covered for the day for distribution of manifestos to prominent residents. Apart from DMK workers, Congress partymen could also be seen electioneering actively in areas like Peravallur seeking votes for Stalin. 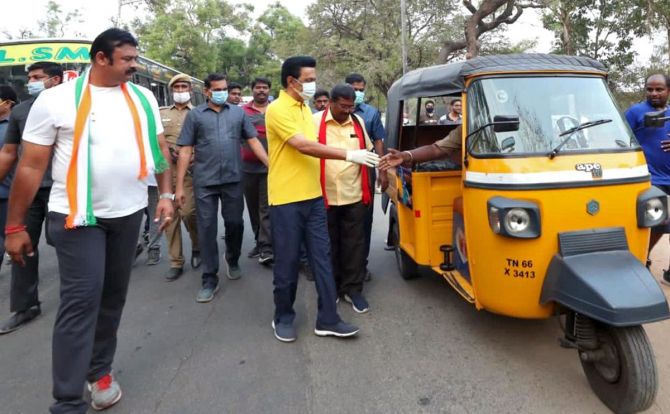 On the AIADMK front, the propaganda on the ground did not seem to match the scale of the DMK’s campaign.

In several areas including Agaram, though AIADMK workers could be seen going out door to door and loudspeakers on campaign vehicles blare out songs listing ‘Amma’ government’s achievements and assurances, the strength of men and propaganda vehicles on roads, pale in comparison with the DMK’s.

One could spot only two kinds of AIADMK leaflets, one sought votes for Rajaram (single page) for continuance of Chief Minister K Palaniswami’s good governance and the other listed poll promises (2-pages) while at least, three types of pamphlets (4-pages each) of DMK are in circulation.

AIADMK’s allies, Pattali Makkal Katchi and the Bharatiya Janata Party, though do their bit, not many could be seen everywhere.

Stalin’s list of ‘achievements’ for Kolathur as an MLA speaks of a slew of initiatives including payment of fee for over 1,000 school, college students, giving laptops to 74 poor students, ‘seervarisai’ (marriage gift and financial assistance) for the poor families and so on. DMK men also credit Stalin for infrastructure development in the segment despite being in the opposition.

Rajaram, however, rejected such development claims.

“Stalin’s focus is only on publicity and he completely ignored people’s basic needs and aspirations,” he said.

“If at all Stalin claims credit for development, it happened because of government support and the credit goes to the AIADMK government.” 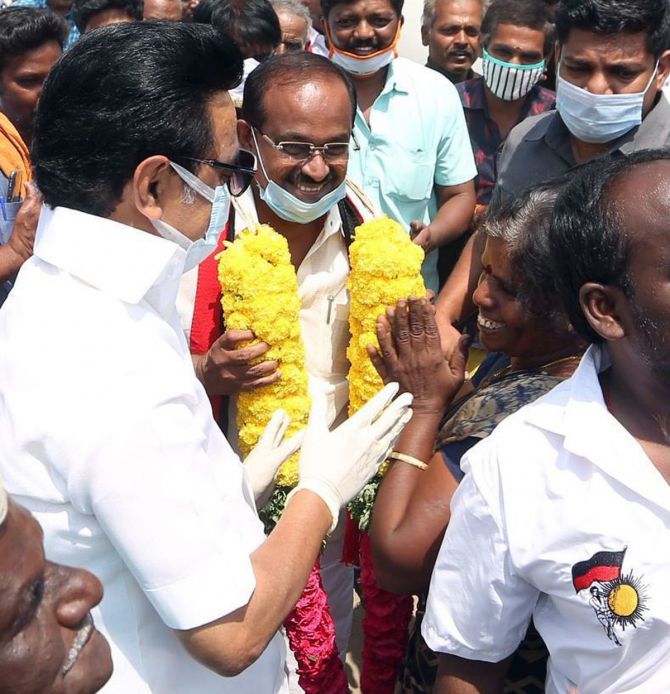 The AIADMK nominee listed several civic and infra woes that Stalin in his capacity as MLA ‘failed’ to address and did not bring such matters to the government’s attention, he alleged.

Stalin did not work to covert overhead High Tension electricity cables into underground lines, and such HT lines had led to fatalities too, Rajaram flagged.

Asked on AIADMK’s campaign appearing to be not matching with that of the DMK, he said it is a ‘wrong’ view. “We have covered door-to-door campaign at least four times till now and we are getting excellent support from the people,” he said.

Kolathur with 2.82 lakh voters (1,44,050 women, third gender 68 and 1,38,181 men) has woes that are common in any urban segment in the country, like uncleared garbage and most residents are from middle income groups.

In 2011, the first election for Kolathur after it was carved out following delimitation, Stalin won by a margin of 2,734 votes and AIADMK’s Saidai Duraisamy was the runner-up.

In 2016, Stalin increased the victory margin to 37,730 and again the AIADMK’s nominee was pushed to the second place.

Nam Tamizhar Katchi’s Selva and Makkal Needhi Maiam’s Jagadeesh Kumar are among the total of 36 candidates in the fray though the fight is essentially between Stalin and Rajaram.