IMAGE: An NSG commando at the spot where the terrorist who shot Major Sandeep Unnikrishnan had positioned himself.

26/11 will always be remembered for the courage displayed by our security forces in overcoming the siege at the Taj Mahal hotel, Oberoi and Chabad House in Mumbai.
For the elite National Security Guard, which was called in to defeat the terrorists, fighting a battle in unfamiliar terrain came with a heavy price attached: The loss of two commandos, Major Sandeep Unnikrishnan at the Taj and Havildar Gajender Singh Bisht at Chabad House.Black Tornado, The 3 Sieges of Mumbai, journalist Sandeep Unnithan, who has been covering internal security for India Today magazine, unearthed fresh details of the NSG operation, the elite force’s epic resolve to win the battle.
We remember Major Sandeep Unnikrishnan, who would have turned 40 today, March 15, 2017.

At 1 am, on 28 November, Major Sandeep led his hit team, Sunil Jodha, Manoj Kumar, Babu Lal and Kishor Kumar through the piece de resistance of the Taj: The grand staircase — a single, long staircase split into two like a Y.

At the landing between the two arms, sat a garlanded bronze bust of Jamshetji Nusserwanji Tata, founder of the Tata business empire and the man who built the Taj in 1903. Tata wore a phenta, the traditional Parsi black cap, and stared sternly into the distance. Behind the bust was a large entrance to the Palm Lounge that had long since been boarded up and covered by a huge mirror.

The staircase was pitch dark. The fire brigade had poured thousands of litres of water at the fires in the Taj. The water now seeped down the floors and dripped into the cavernous staircase area. The sound of dripping water added to the eeriness of the place. It was like entering a smoky jungle cave.

A thick red carpet with floral patterns was fastened to the steps by thick brass stair rods. The carpet was soggy and oozed water, which meant that the commandos’ boots made a gentle squishing sound as they walked up the stairs towards the bust.

As the hit team walked up the stairs, gun flashes lit up the darkened stairway. The terrorists were firing at them from above. Unni signalled Sunil and Babu Lal, to head up left and towards the heavy brown doors that led to the Palm Lounge and the ballroom. They were to throw grenades and clear the Palm Lounge. The two commandos walked up gently, weapons drawn. They took positions on either side of the doorway. The doors were shut.

Just then, a grenade flew out of the darkness. It bounced on the carpeted staircase and exploded. An AK-47 rattled from above. Bullets drilled the staircase. They punched into the walls around the doorway, digging into the stone and plaster. The glass around Tata’s bust shattered. It was an ambush.

The terrorists were on high ground. They had seen the silhouettes of the NSG men. And they had waited. The atrium was now a kill zone. Major Unnikrishnan moved under the cover fire provided by his two commandos.

Another grenade sailed out from one of the top floors and exploded on the granite floor. Over 5,000 ball bearings from the grenade blasted a deadly pattern around the staircase. Sunil Jodha’s body was riddled with bullets and splinters. He collapsed and rolled back down the stairs to the foot of the bust.

The commandos took cover and blasted away at their unseen enemy. Blood oozed around Sunil’s body. Two bullets had entered his chest. One had been trapped by the ceramic rifle plate on his bulletproof jacket. His left arm was lacerated with steel ball bearings. ‘I’m going to lose my arm,’ he thought to himself as he lay prone on the floor.

Unni rushed back to Sunil. He saw blood streaming out of his buddy’s wounds. ‘Take him back for first aid,’ he hissed at Babu Lal. In a flash he had gone back up towards the Palm Lounge, alone.

Unni swung up his MP5 and fired a burst across the atrium. The bullets hammered into the wall. Then he bounded up the stairs leading to the other set of doors opening into the Palm Lounge. It was a terribly risky move because he didn’t have a buddy to cover him.

If he broke contact, the cat-and-mouse game would start all over again. He decided to outflank the terrorists. His running shoes made no sound. He could see the outlines of the large wicker chairs and tables strewn before him.

He felt his bandolier. He only had a white flash-bang grenade left. He flicked the pin off the grenade and flung it into the lounge. The grenade exploded with a loud crack that rattled the windows. Unni dashed in. He then fired a burst at the sea-facing windows. Clear!

He looked around the wall. A brown ornate grille in front of him covered the ballroom like metal foliage. The ballroom was his target. He held his MP5 in front of him as he swiftly charged down the corridor. To his left was a small alcove with two sofas and a circular granite tabletop. There was a flash from beneath the table and two near-simultaneous sounds — the rattle of an AK-47 and the burst of an MP5. 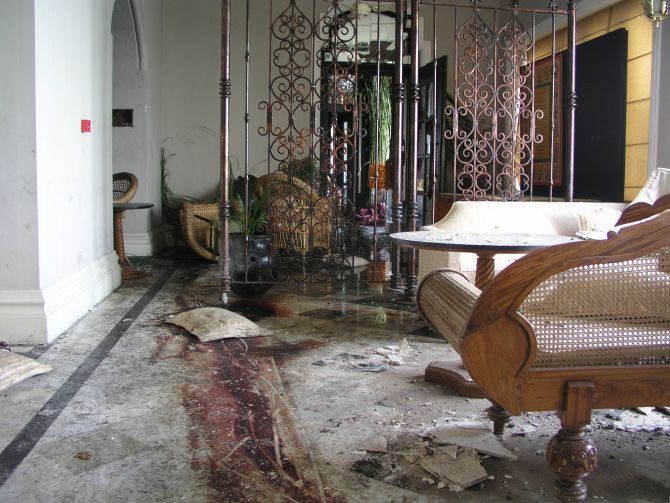 Colonel Sheoran’s message pulsed aimlessly through the airwaves around the Taj. There was no response. ‘Perhaps he is in close contact, he won’t speak…’ Brigadier Sisodia said. The NSG rapidly cleared the charred southern end of the hotel, the Sea Lounge on the second floor. NSG commandos now guarded all the vital access routes into the northern end of the hotel.

By 3 am on Friday, 28 November, Major Kandwal’s weary team had cleared all twenty-one floors of the Taj Tower. Kandwal handed the Tower back to the Mumbai police. Four hours later, all the rooms in both hotels were cleared of potential hostages. Now the hunt for the terrorists would begin. But where was Major Unnikrishnan?

Sheoran climbed up to the fourth floor and peered down the grand staircase into the atrium below. Bodies, limp and contorted, still dotted the galleries around the atrium. ‘Saabji, look at the bodies,’ one of his commandos, Havildar Digh Ram, whispered. The bodies were bloating. It had been over thirty-six hours since the terrorists had struck. The air was thick, foul and nauseating. It smelt of putrefying bodies and rotting food. The bodies could not be removed till the NSG did their ‘Render Safe Procedure’ to clear booby traps. For that to begin, the buildings had to be cleared of terrorists.

Sheoran, however, was searching for Unni. He looked closely at the first floor where they had made contact with the terrorists. It had four doors. One of those doors, diagonally opposite the bust, was open. The door led into the hotel. Perhaps, Unni had gone looking for the terrorists in the opposite direction.

At 6.30 am Jasrotia’s radio on the roof of the residential building crackled urgently. ‘Sierra Six, this is Sierra One, come to Op Centre. Over.’ Sheoran needed more hands to augment the search for the missing major. The size of the teams was reduced. Jasrotia was given two hit teams and tasked to move and search the first floor.

He would start from the kitchen area where Major John, a newly inducted officer, had taken position. Sheoran’s officers repeatedly dialled Unni’s mobile phone. It was switched off. If Unni was in the hotel, he was being very quiet.

At around 9.30 am, Major Kandwal and Major Jasrotia retraced Unni’s steps. They advanced as a two-man buddy pair. Jasrotia aimed his MP5 in front.

Kandwal, covering the rear, aimed his MP5 above him. A black figure lay prone on the marble floor, face up.

Unni! His left leg was folded under his right. His right arm lay outstretched, left arm across his chest. His body was riddled with bullets and lay in a sticky black pool of blood. All the bullets had been fired from the left. The fatal round had pierced his head from the lower jaw and exited the skull. His walkie-talkie lay two feet away from his head. It was neatly placed on the floor, upright, switched off. The ring of a flash-bang grenade pin hung around his thumb. 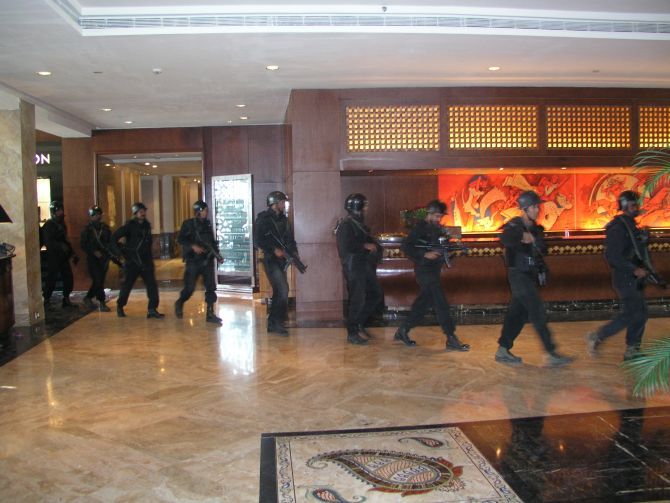 It didn’t take long to figure out what happened. The terrorist had been hiding in the alcove behind the statue, crouched under the table and two sofas. He had shot the lone Black Cat as he charged down the corridor. Unni had taken a burst from an AK-47. His body had twisted around as it hit the floor. The terrorist had taken his weapons and retreated northwards into the hotel.

But the officer had not gone down without a fight. He had instinctively fired at his assailant. Bullets from Unni’s MP5 were embedded on the wall and the wooden lattice. A bloodied running shoe of a terrorist lay nearby. A trail of blood led towards the ballroom. Unni had wounded the terrorist.

Kandwal reached for his mobile phone and not his walkie-talkie. No one could know that an officer was down. ‘Sir, Unni no more. Confirmed.’ There was a brief pause. Colonel Sheoran’s voice did not betray his anguish, ‘OK. Wait. I’ll send someone.’

Major Sandeep Unnikrishnan became the NSG’s first officer to die in combat. His death shook the 51 SAG. It was the death of a beloved colleague and a reckoning of their own mortality.

Unni’s death slowed the operation at the Taj. The NSG brass reassessed their moves. They became cautious. They would not waste any more lives. His death was, however, kept away from the troops. Sheoran did not want it to affect their morale.

Major Unnikrishnan’s last charge pushed the terrorists towards the restaurants at the northern end of the Taj. They could run no further. Sheoran was determined not to let Unni’s death go in vain. He moved his snipers to cover the north wing. Sheoran called down Captain Dalal and his shooters from their perch atop the Yacht Club.

Dalal instinctively knew something was wrong.

He felt a cloud over the command centre at the Taj, but asked no questions. The CO had orders for him.

Dalal was to take his two-man sniper team into a fire brigade sky lift. The Mumbai Fire Brigade’s telescoping articulated platform was critical in rescuing hostages from the upper floors of the Taj. Now it would be used as a sniper perch. The platform was positioned on the road just 25 metres away from the northern corner of the hotel. Dalal and Mustafa Pathan clambered on board.

The six-square-foot cage had just enough place for three persons including the operator who manoeuvred the platform. The snipers took their bulletproof vests off and placed it in front of them to create an improvised shield. Sheoran directed Dalal to ensure the terrorists would not target the media, which had been moved to the far corner of the Gateway of India. The PSG-1 gun barrel now aimed at the Taj, wary eyes peered through its rubber-lined Hensoldt-scope, looking for the terrorists.

Next, Sheoran directed his teams to move into the ballroom.

The commandos tiptoed in. It was pitch dark. They warily tore down the thick drapes that covered the windows and began searching the room. It took them nearly five hours to complete the search. The ballroom was clean.

Excerpted from Black Tornado, The 3 Sieges of Mumbai, by Sandeep Unnithan, with the publishers HarperCollins’ permission.