Journalists will be exempted from seeking consent of individuals before collecting and reviewing their personal data to be used in news reports.
They will not be obliged to share the reason behind collecting personal data. Somesh Jha reports. 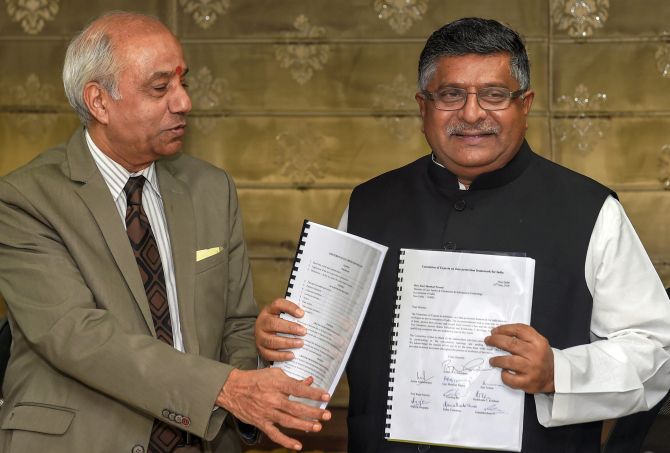 The draft Personal Data Protection Bill 2018 has put data gathered for ‘journalistic purposes’ in the exempt list — meaning provisions of the new law will not apply to journalists, which, in some cases, may also include citizen journalists.

However, journalists will have to adhere to the code of ethics prescribed by the Press Council of India or ‘any media self-regulatory organisation’.

A committee of experts — led by former Supreme Court judge B N Srikrishna — had submitted its 176-page report on data protection, along with a draft law, to the Centre on Friday.

Journalists will be exempted from seeking consent of individuals before collecting and reviewing their personal data to be used in news reports.

They will not be obliged to share the reason behind collecting personal data.

‘It would be impractical to expect a journalist to specify in exact terms the purpose the personal data is being collected for,’ the Srikrishna panel report said, adding, ‘Purpose limitation will not apply, though journalists, to the extent possible, should still be expected to outline the broad contours of the purpose for which the personal data is being collected, with the final purpose being the publishing of news on the subject.’

As per the proposed law, the purpose of processing or collecting personal data must be specified by both government and private agencies or individuals, termed as ‘purpose limitation’.

“In our judicial history, there were clashes between right to privacy and freedom of speech, which included the right for journalists to report.

“The data protection Bill could have gone either way, and the fact that freedom of press has been given due importance should be praised,” said Gautam Bhatia, a Delhi-based lawyer.

Further, under the proposed law, the personal data will be stored for a specific period of time as necessary to fulfil the purpose — known as storage limitation — following which it has to be deleted.

‘However, to cover new stories, journalists may often need to search past records of data and deletion of personal data collected post-publishing may make it very difficult.

‘Therefore, under the journalistic exemption, storage limitation should not apply so long as it is clear that the personal data is being stored only for further journalistic purposes,’ the panel’s report stated.

The panel also urged the PCI and other media watchdogs to incorporate provisions for data privacy in their code of ethics, so that the exemption provided to journalists ‘does not lead to undue violation of the data protection rights’ of individuals.

Requests to implement data principal rights like the right to access, confirm and correct can be refused by journalists, both before and after the publication of a news report, according to the panel.

‘An exemption from this obligation may also be necessary to stop persons from harassing journalists by inundating them with requests, with a view of blocking or slowing down investigation or publishing of a piece of news,’ the panel said.

The panel acknowledged that the definition of journalism is continuously expanding.

According to the provisions of the draft Bill, sensitive personal data includes passwords, financial data, sex life, sexual orientation, and religious and political beliefs, among others.