Cyclone Yaas Live Tracking, Weather forecast Today Live News Updates: PM Modi will visit both Odisha and West Bengal to review the effects of cyclone in the two coastal states. The PM will first make a visit to Bhubaneswar where he will hold a review meeting. “Prime Minister Narendra Modi is coming here after conducting a survey of cyclone-affected areas in Odisha. He will reach Kalaikunda via Digha, and take his flight to Delhi from there. We will have a short review meeting on cyclone Yaas at Kalaikunda,” Banerjee told mediapersons at the secretariat.

PM Modi will visit both Odisha and West Bengal to review the effects of cyclone in the two coastal states. The PM will first make a visit to Bhubaneswar where he will hold a review meeting. He will then proceed for an aerial survey in the affected areas of Balsore, Bhadrak and Purba Medinipur. Following this, PM Modi will take part in a review meeting in West Bengal.

West Bengal CM Mamata Banerjee is set to hold a review meeting with PM Modi today. Follow this space for the latest updates.

West Bengal Chief Minister Mamata Banerjee will meet Prime Minister Modi at Kalaikunda Air Force station on Friday to review the situation in the state after it was ravaged by Cyclone Yaas. Both PM Modi and Banerjee are set to conduct separate aerial surveys of affected regions later in the day.

Indian Navy teams continued to carry out relief operations in affected regions across Odisha. Here are some pictures: 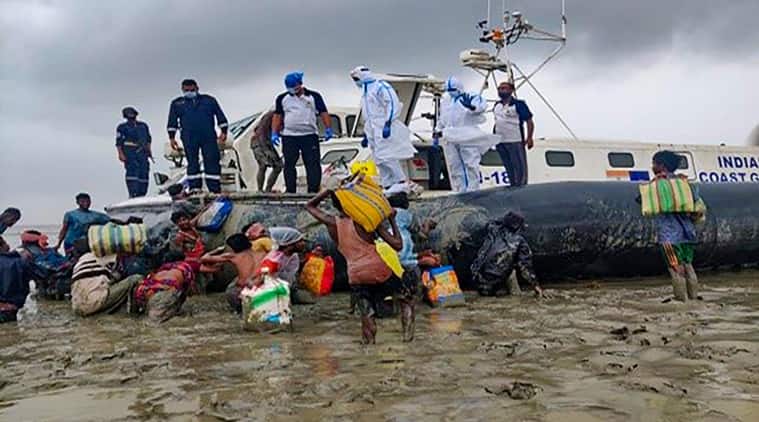 As Cyclone Yaas made landfall in north Odisha around 10.30 am on Wednesday, strong winds and heavy tides lashed several coastal towns and villages on either sides of the Odisha-West Bengal border, inundating low-lying areas and uprooting trees, and claiming at least three lives — two in Odisha and one in West Bengal.

Odisha Chief Minister Naveen Patnaik conducted an aerial survey to assess the extent of damage in the state on Thursday. The cyclonic storm weakened into a deep depression over southern Jharkhand and adjoining Odisha, according to the Indian Meteorological Department (IMD). It is likely to move northwestward and gradually weaken into a depression later today, the IMD said.

Meanwhile, a spokesperson for UN Secretary General Antonio Guterres said the world body was ready to assist the country in its relief efforts if it needed help. “From South Asia, which is being impacted currently by Tropical Cyclone Yaas, our humanitarian colleagues tell us that we have activated cyclone preparedness measures and prepositioned stocks of food and other items,” spokesperson Stephane Dujarric said. “The cyclone reached the Indian state of Odisha yesterday, with millions of people being evacuated by the Government ahead of the storm. UN agencies and our partners in India stand ready to support the response efforts if State authorities request it.”

Gary Fisher, father of mountain biking, on what sets the sport apart