Since traditional earthenware is becoming ‘trendy’, they feel their livelihood is endangered like never before. And their enemy is common – plastic. 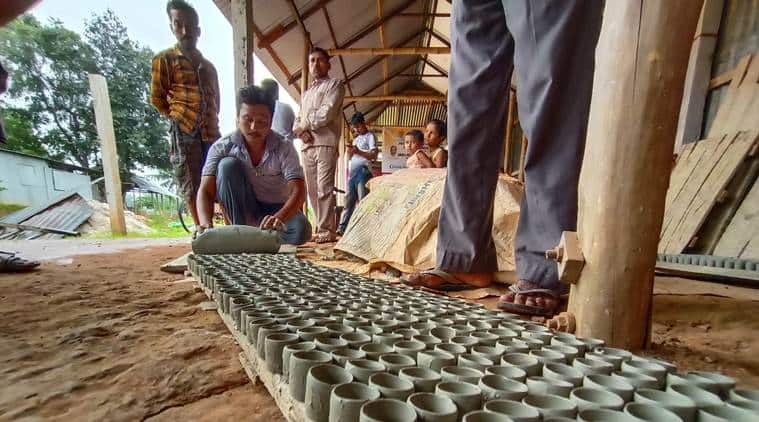 “Diwali is the one time in the year when we see some profit. Yet, the demand seems to be declining. Now, they have plastic lights for Diwali, even plastic-‘diya’ filled with wax. Ours is art and craft and it is facing a grave danger,” says 37-year-old Arjun Rudrapal, who comes from a family of potters belonging to Nandannagar’s Palpara area in Tripura.

Pottery has been a family tradition for two hundred odd potter families in Tripura’s Palpara locality, located in the suburbs of Agartala city, for the last seven generations, if not more. Today, at a time when traditional earthenware are becoming ‘trendy’, these ‘people of clay’ feel their livelihoods are endangered like never before. And they have a common enemy – plastic.

Echoing Rudrapal, 60-year-old Harijan Rudrapal says the earthenwares are sold between Re 1 and Rs 6 and such meagre earnings are difficult to sustain a family of five. “These days you find all sorts of plastic utensils, ranging from single-use plastic tumblers, cups, plates. Our earthen cups, tumblers don’t have much market value,” Harijan rues.

Pushed to the wall, these potters are now upgrading themselves with modern machines and pottery techniques to get an edge over others. Several of them received training under the Pottery Skill Upgradation Training Programme under the Ministry of Small and Medium Enterprises (MSME). A recent move by the state government to replace plastic cups in all railway stations of Tripura by earthenware has been a major help, says Harijan.

“The state government has recently called to replace all plastic cups and tumblers in railway stations with earthenware. We are trying to boost our production to meet the required quantum of demand,” says Suman Paul, a 30-year old-potter.

However, Suman feels the danger to his profession also comes from a few other corners. “We don’t have price fixation in place. Often, our commodities are priced low and it adversely affects our business since wholesale traders tend to go for cheaper rates. Also, we don’t have any permanent sale point to evade middlemen,” Suman points out.

Potters of Nandannagar sell earthen ‘diya’ at Re 1 per piece to middlemen and wholesale traders. Some even sell their products at 50 paise a piece. But these clay lamps are sold at Rs 3-5 per piece in the local market.

Appealing to the people to shun the use of plastic diyas this Diwali, Suman and his fellow potters have come up with a slogan, “This Diwali, Diye Ke Sang Diwali’.

If the Heart Says So: Can there be a Christmas meal without cake?