The Congress leader's remarks came against the backdrop of nationwide protests against the controversial Citizenship (Amendment) Act and the proposed National Register of Citizens (NRC). 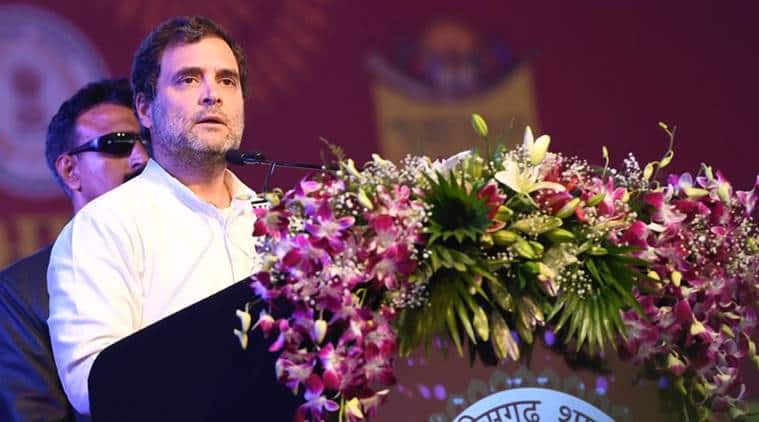 Former Congress president Rahul Gandhi Friday said that the country could never be benefitted “if brothers are made to fight brothers” and also asserted that the country’s economy cannot be run “without taking everyone along”.

“The condition of the country you are aware of. What is happening in other states you know. The state of farmers, the state of the economy, unemployment. There is no reason to repeat. But I only want to say one thing. Without taking everyone along, every religion, every caste, Adivasi, Dalit, the backward classes, India’s economy cannot be run. Do whatever you want. But till the time you do not bring people together, till the time people’s voices are not heard in the Lok Sabha or the Vidhan Sabha, nothing can be done about unemployment, or the economy. Put however much strength you want,” he said. Gandhi was speaking at the inauguration of a three day National Tribal Dance Festival organised by the Chhattisgarh government.

His remarks came against the backdrop of nationwide protests against the controversial Citizenship (Amendment) Act and the proposed nationwide National Register of Citizens (NRC).

Gandhi added, “I say in every speech. The economy is run by farmers, labourers, the poor, Adivasis. If you put all the money in the hands of 10 15 people, do notebandi, implement the wrong GST, then it is not possible to generate employment, the economy cannot run. And I am quite happy that in Chhattisgarh, whether it is farmers or the youth or mothers and sisters, we are taking everyone along and pushing the state forward. And the difference can be seen. Violence has lessened. The economy of Chhattisgarh is going ahead past other states.”

The Congress government in Chhattisgarh has declared that the new citizenship law and the NRC would not be implemented in the state. Apart from Chhattisgarh CM Bhupesh Baghel, CMs of Opposition-ruled states West Bengal’s Mamata Banerjee, Punjab’s Amarinder Singh, and Kerala’s Pinarayi Vijayan, and Andhra Pradesh’ Y S Jagan Mohan Reddy have already opposed both the CAA and NRC.

Last week, the Congress joined the protests against the new citizenship law and the NRC in a big way, with its entire top leadership holding a satyagraha at Raj Ghat. Gandhi had then alleged that Prime Minister Narendra Modi was “number one” in breaking the country and spreading hatred, but warned that people of the country would not let him attack the Constitution and suppress the voice of “Bharat mata”.

The Congress will also take out flag marches across the country on its foundation day on Saturday to take its ‘Save Constitution-Save India’ message to the people. The presidents of Pradesh Congress Committees will read the preamble of the Constitution in their respective languages at public meetings organised for this purpose.

Gandhi will also join the programme in Guwahati with other senior leaders participating in their respective states.

How a Kerala district is fighting COVID-19