The electoral fortunes of the Congress took another dip on Sunday as it failed to make a mark in the assembly polls in four states and Puducherry, the only minor consolation being the victory of its Dravida Munnetra Kazagham-led alliance in Tamil Nadu. 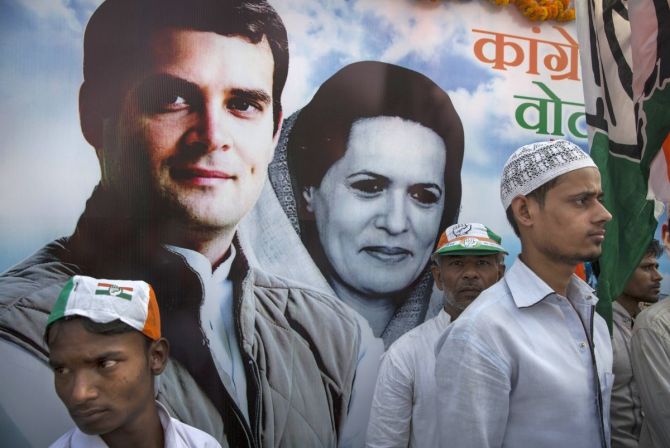 While the party drew a blank in West Bengal, it could not impress the voters of Assam and Kerala, where it was hoping to stage a comeback.

But the setback promises to have far-reaching ramifications within and outside the party as it is likely to fuel voices that have challenged the Gandhi family’s leadership and also those who have been a votary of a non-Congress front to take on the Bharatiya Janata Party.

The poll results come as a big blow especially to former Congress president Rahul Gandhi, who was actively campaigning in Kerala but failed to give an antidote for the internal factionalism in the state unit which proved very costly. Congress has the maximum number of its MPs from Kerala, including Rahul Gandhi who represents Wayanad.

The Left Democratic Front was all set to retain Kerala, bucking the historical trend of governments alternating every five years.

With Mamata Banerjee emerging victorious, there would be more claimants to the Opposition leadership space in the coming times, even though Congress feels it is the only party with a national presence and outlook.

The post-election phase in the Congress would be crucial with the debate on leadership likely to be revived especially in light of the January 22, 2021 decision of the Congress Working Committee that the party “will have a new president by June 2021 at any cost.”

The leadership of the Gandhis would once again come under question in the party, where the G-23 leaders, including Ghulam Nabi Azad and Anand Sharma, are waiting to make their next moves.

The former Congress chief and his sister and AICC general secretary Priyanka Gandhi Vadra had campaigned vigorously in Kerala and Assam and the ‘Group of 23’, claiming themselves as “conscious-keepers” but considered “dissenters” within the party, would be out with knives once the poll analysis and deliberations on losses are done.

Humbly accepting the verdict, Rahul Gandhi said, “We will continue to fight for our values and ideals”.

Congress chief spokesperson Randeep Surjewala said the party may have “lost” elections in Assam, Kerala, Puducherry and West Bengal but has not “lost its morale or resolve” to continue to be people’s voice in these tough times.

He said the party would deliberate on its failures and do course correction after internal deliberations.

“The Congress will definitely study the results and all the reasons diligently and we are committed to correct our mistakes and do appropriate course correction,” he said.
Former union minister Ashwani Kumar said the election results are an SOS for the Congress ahead of the 2024 Lok Sabha elections.

The need for demonstrable and purposive action to address the organisational and communication gaps was never more evident, he said.

“For Congress to retain its resilience and relevance in national politics it must secure internal cohesiveness and establish an emotional connect with the people. It needs to work on its messaging and accurately assess the barometer of popular sensitivities,” he said.

Kumar said at the present juncture and considering the political realities, Sonia Gandhi’s unifying leadership of the party is necessary.

“The foremost task is to keep the party together through an extensive reach out and to enlarge the network of political alliances while involving all leaders in rejuvenating the party,” he noted.

The party is currently facing a number of internal issues with questions also being raised within on poll alliances with All India United Democratic Front in Assam and Indian Secular Front in West Bengal.

A section of party leaders feels the effects of tying up with “communal” parties in these states are likely to cost the party dearly in the coming times.

Congress is in power on its own in Punjab, Rajasthan and Chhattisgarh and in alliance with other parties in Maharashtra and Jharkhand.

CEC: We’re not going back to ballot box era