The state Fisheries Commissioner has estimated the actual loss of fish production over March, April and May to be 80 per cent of the expected production. At Jivna Bunder, a fishing jetty in the coastal town of Shrivardhan, fishermen are unhurriedly bundling up swathes of fishing nets of varied shapes and colour. The nets have been drying in the sun for days since the lockdown kicked in on March 24, when the coronavirus pandemic prompted a nationwide closure.

At other times, the scene at the jetty on an April morning would have been much different. Fishing boats of all sizes would be bringing the day’s fresh catch — from eels, lobsters and sting rays to the more popular pomfret, seer fish and prawns — to be put on display to be auctioned off. A crowd of fisherfolks, bulk buyers from restaurants and locals would immediately break into hard, cacophonous bargains and in minutes the catch would be out of the jetty, making way for more as boats continued to pull in. In this daily unfolding, the resident felines would hop from one fish basket to another, never going hungry.

Chandrakant Chougule, a fisherman who owns one six-cylinder fishing trawler and a single cylinder small boat, says “We have pulled our big trawlers ashore. What will we do by sending them into the deep sea, spending on diesel and workers when the catch we bring back won’t even reach the markets in the big cities? Seafood is perishable, and in this lockdown, we have not been able to send it to the markets in Mumbai and Pune. They are all closed. Since the lockdown, fishermen have stopped large-scale fishing. Only small fishermen, who sell locally and feed their families, have been continuing to venture into the sea. Theirs is a hand-to-mouth kind of situation.” 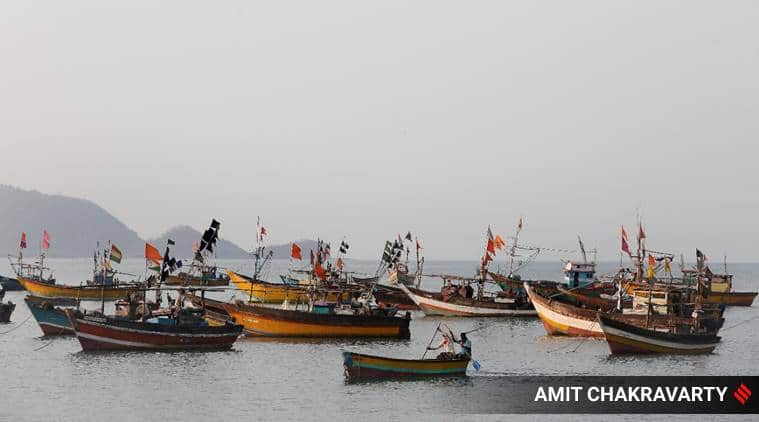 Fisherfolk in the Konkan region — three districts of Raigad, Ratnagiri and Sindhudurg — say that business has been ‘eclipsed’ first by the cyclonic storm in November last year and now the lockdown. Fishing activities had to be suspended following cyclone warnings and just when it was time for business to pick up, the nation-wide lockdown to contain the spread of the COVID-19 kicked in. With the arrival of monsoon in June, they will have stay off the water until the end of August, they rue.

The state Fisheries Commissioner has estimated the actual loss of fish production over March, April and May to be 80 per cent of the expected production. Earlier this month, the Commissioner of Fisheries, Rajeev Jadhav, in the letter to the principal secretary of Animal Husbandry, Dairy Development and Fisheries (ADF), stated that fishermen in the state had suffered on account of the “huge economic crisis” in view of the “extraordinary situation prevailing due to COVID-19 virus spread”. He stated that the average fish production from March to May was expected to be 67,840.40 metric tonnes for marine fish production (fishing in seas) at the rate of 1,696.01 metric tonnes per day, however, the actual production of marine fishing was 13,568 metric tonnes. Similarly, for inland fishing (fishing in lakes, ponds, reservoirs) the expected production during the 40 days of lockdown was 14,685.2 metric tonnes, but actual fishing was 2,937.04 metric tonnes, that is only 20 per cent. This, the Fisheries Commissioner stated in his letter, had translated into a monetary loss of Rs 652.27 crore and Rs 117.48 crore in the marine and inland sectors, respectively.

Jadhav said the loss estimates were drawn up following directions from the Centre. “….to mitigate the problem of livelihood and lack of income of fishermen community, it is proposed that the government of India should consider some relief amount to the affected fishermen in view of the loss of livelihood due to COVID-19 lockdown,” the letter stated. He requested for a special relief package or a monetary allowance from the Centre for the fishing community.

In Shrivardhan, however, Mohan Waghe, former chairman of the Shri Krishna Machchimar Society, said, “We have never asked the government for anything till today. A koli (fisherman) may be in debt, but he will fight to feed his family. But we have never seen a time like this before. At this rate, many of us fishermen may have to go the Marathwada farmer way. At least the government has extended some help to them, but now it will have to think of us too. We don’t want doles, but we may need a hand to make us self-reliant again.”

Waghe said owners of big fishing trawlers need about five to 10 khalashis (workers) to fish in the deep seas. Moreover they were unable to send their products out without the usual availability of ice boxes and trucks ferrying the catch to the market. Although fishing activities were exempted from the lockdown, social-distancing requirements prohibited fishermen from employing too many workers on their vessels. Minister of State for Tourism and Shrivardhan MLA Aditi Tatkare said, “Fishing was exempted from the lockdown but fishermen have themselves been reluctant. Last week, Shrivardhan had its first COVID-19 case. It was a person who had come from Mumbai. We will observe the situation for the next 14 days and if there are no further cases, we will request the government to make it a green zone so that all activities can be resumed.”

At the moment, she said, most of the state funds were being diverted to the health and food and civil supplies departments, but once the situation improves, they may draw the state government’s attention to the need for compensating fishermen.

The popular Alibaug beach that overlooks the Alibaug Fort, too, is far removed from its usual summer vacation hubbub. Missing from the scene are tourists milling around the water, families making sand castles, vendors selling coconut water and ice popsicles, water sport activities, leaving only its five lifeguards with almost no one to watch over. On the sweltering afternoon, however, stray dogs get comfortable under a colourful canopy erected by the Alibaug Municipal Council.

An oar over his shoulder, Pankaj Navkhande emerges from his boat after the day’s catch. A traditional fisherman, he would usually bring back 7-8 kg of fish, but today it has shrunk to 2-3 kg.

Walking behind him is Vitthal Bandri, another fisherman, who has covered his nose and mouth a handkerchief, “In 30 years that I have been going into the sea, never have I had to cover my face. This is such a strange time. We would sell lobster at Rs 1,500 a kg and now we can barely get Rs 700 for it. May was the only month for us to make some money. Once monsoon arrives, we will have to sit at home again,” he says.

Shades of Saaho Chapter 2: Boom! is the perfect word to describe this BTS video with high-octane stunts featuring Prabhas and Shraddha Kapoor