Corporations like IBM and Palantir, many of which are reducing office space, are starting to partner with WeWork and other coworking entities. 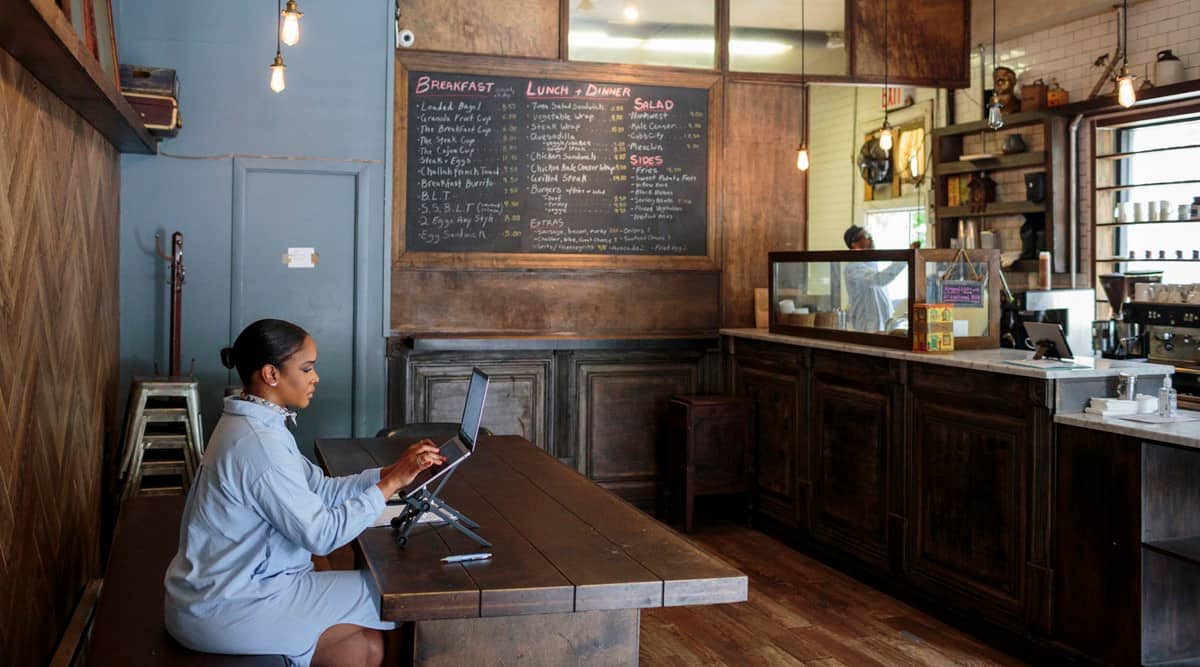 Though Kia Roberts, who runs her own misconduct investigation firm, originally felt hesitant about joining The Wing, the feminist-aligned coworking space and social club, she fell in love with it after a visit to its Dumbo location in early 2019.

“The connections, the beautiful spaces, the great food, the buzzy and boozy events that featured a ton of fascinating speakers” appealed to her, she said. She was a regular at all of the Wing’s New York locations when the pandemic hit, forcing her to work from home in Clinton Hill, Brooklyn.

After over a year of working from her bedroom, where her folding desk often pinched her fingers while a home-schooling pod usurped her dining room table, Roberts was eager to get back to a shared office. The question was, where?

It would be easy to assume that the pandemic had dealt a final blow to coworking spaces. Instead, they are doing just fine, taking advantage of pent-up remote workers and a very confused commercial real estate sector. The Wing and WeWork, both of which endured recent public relations disasters — the former with charges of casual racism and the latter imploding after being significantly overvalued — are reorganizing, with memberships on the upswing. Corporations like IBM and Palantir, many of which are reducing office space, are starting to partner with WeWork and other coworking entities.

And smaller, resourceful coworking initiatives are cropping up everywhere, introducing new competition. Santander Bank opened a work cafe in Williamsburg, Brooklyn, last fall. Talea, a new brewery also in Williamsburg, opens to remote workers every morning at 8, offering coffee and high-speed Wi-Fi. Restaurants and homeowners are renting out their spaces during business hours, and one startup, Codi, has been called the Airbnb of coworking.

“There’s a shift in the work dynamic, but there will always be a demand to leave your house and go to work,” said Joseph Chehebar, a founder of SoHo’s Kin Spaces, which leases office space to small companies.

Even though Roberts had fond memories of the Wing, she was unsure where she would plant her laptop next, with so many new options available. One thing was clear to her, however: “I need to get out of this apartment.”

Lauren Kassan, the chief executive of The Wing, is aware that 2021 is a customer’s market, so her team is working hard to please returning clients at its three Manhattan spaces, which reopened in May. Its changes include small touches, like free tote bags and scented candles, and broader structural ones that address last year’s criticisms, including a diverse advisory board, new racial justice initiatives and diversity training. Bea Arthur, a mental health counselor, joined The Wing four years ago and recently returned. “I’m a tough girl, I was like ‘nuh uh,’ all the pink,” Arthur said of her initial hesitation to become a member. “But they nailed the vibe. There’s a lot of diversity. I’m very glad it’s back.” Her biggest surprise upon return? More men working there.

The Wing is dedicated to an “expanded culture code,” Kassan said.

Plenty of New Yorkers would rather not be bothered with workplace culture at all. “There’s no better gift than being left alone,” said Matt Gallagher, a writer. Labyrinthe, in Williamsburg, has people like Gallagher in mind. The founder, Lyon Aung, and his partners, all recent college graduates with startup aspirations, found that trying to work together in cafes was not sustainable. They also “didn’t vibe well,” Aung said, with more commercial coworking spaces like WeWork. The trio came up with the idea of individual pods, unlocked and rentable by the hour through users’ smartphones.

Gallagher discovered Labyrinthe last fall, when he had reached his wit’s end working at home with two children and a spouse teaching elementary school remotely. “Having a pseudo office to go to at hours of my choosing has been fantastic for my work-life balance,” he said after a morning shift in the pod, followed by lunch and family time. “I need the space to exit the real world, just disappear into my head and disappear into whatever’s happening between me and the Word document.”

Earlier in the pandemic, hotels offered workday rentals, while many New Yorkers came up with office alternatives that were anywhere but home. Restaurants, too, started to latch on to the concept.

Last fall, the restaurateur Moshe Schulman started Work From Kindred, inviting people to use his East Village restaurant’s Wi-Fi, coffee, outlets and bathroom (for $25 a day) on weekdays from 9 to 5. Hundreds of New Yorkers took him up on his offer, he said, many returning two or three times a week. The program went on hiatus for the winter, resuming in May with the introduction of an outdoor extension. One team meeting there recently used plastic safety barriers as an impromptu drawing board to post sticky notes with marketing ideas. In a strange twist, coworking “regulars” reserve their spots using the restaurant reservation service Resy.

Codi, a San Francisco-based startup that allows hosts to rent out their homes or commercial spaces to workers, was a saving grace for Hanya Chang, a Williamsburg-based artist. She had always envisioned her rented loft space as a vibrant live-work community, but the pandemic shut down workshop possibilities for her, leaving her alone for months on end.

“I missed seeing people’s faces,” Chang said. “It’s nice to have a conversation, see what people are working on.” Now, she is renting her loft to a private company, which uses her living room. Her expenses are covered, she said, and her creativity has gotten a boost from other people being around. Plus, the employees, all of whom live near her, do not have much of a commute.

Offering an alternative to commuting is also a goal of Pirro Cece, the founder of Class & Co, in Greenpoint. He is giving his neighbors in North Brooklyn a place to unite and share skills and ideas. “You don’t have to commute,” he said. “Coworking is the future.” 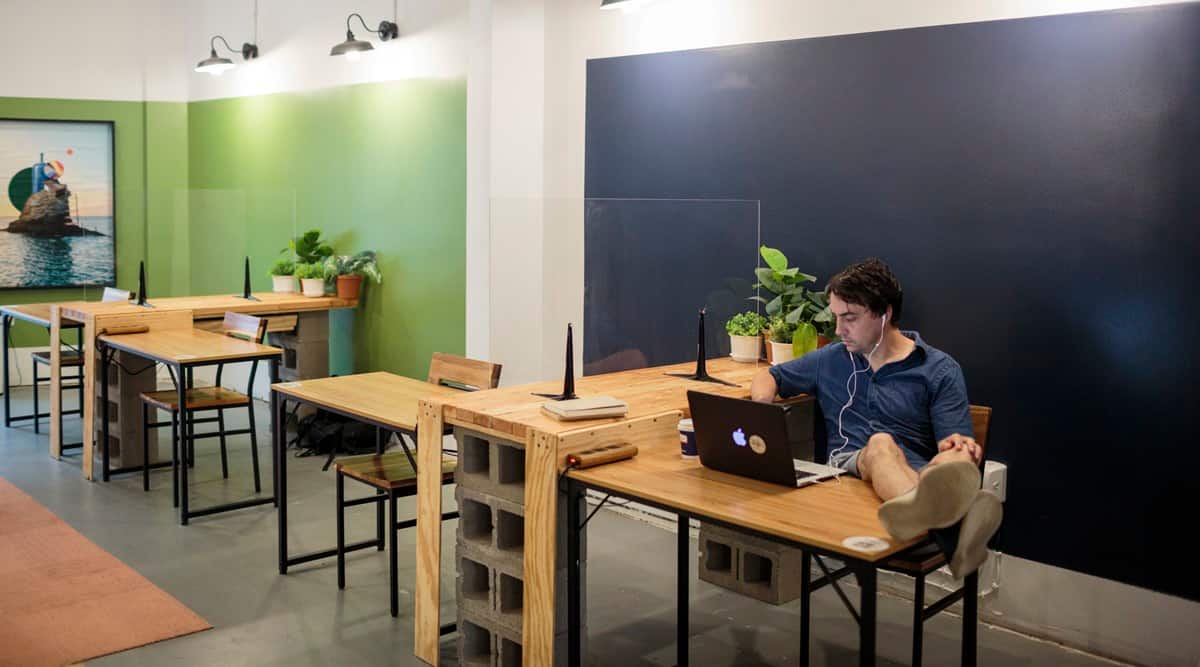 As for Roberts, who runs the investigation firm, she ended up joining Spaces, yet another new venture in Fort Greene, near her home. Proximity was key, she said. “I just needed a clean, quiet, child-free space close to home,” she explained. And so far, so good.

“I honestly feel the most productive that I’ve felt in over a year. It has been heavenly.”