Union Home Minister Amit Shah chaired a meeting in Delhi of top police and paramilitary officers from across the country Monday where various security issues, including the civilian killings in J&K, were discussed. 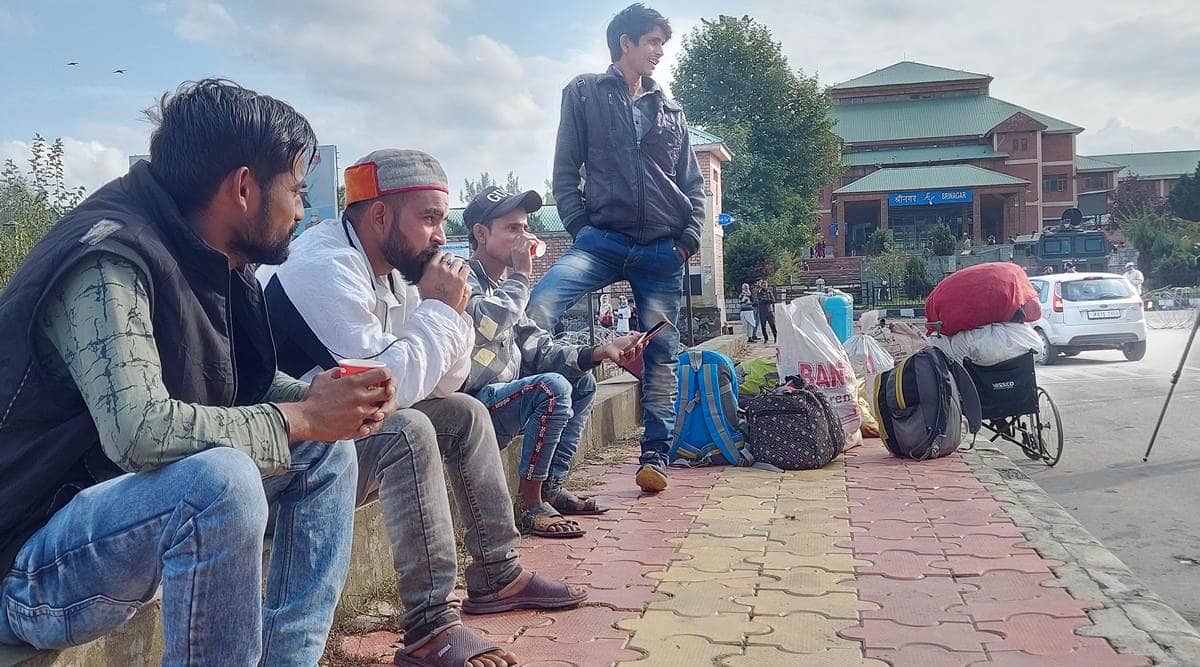 HUNDREDS of migrant labourers left Kashmir on Monday morning, as two more killings on Sunday took the number of civilian deaths in attacks in the Valley this month to 11. While scores of them were huddled into secure accommodations by the J&K Police immediately after Sunday’s attack, the third on migrant workers in Kashmir in less than 24 hours, this has only increased the fear.

Union Home Minister Amit Shah chaired a meeting in Delhi of top police and paramilitary officers from across the country Monday where various security issues, including the civilian killings in J&K, were discussed. Addressing reporters in Patna, Bihar Chief Minister Nitish Kumar expressed concern that “people who have gone for work are being deliberately targeted in J&K”, and said he had spoken to J&K Lieutenant Governor Manoj Sinha on the matter.

As per a PTI report, Kumar announced an ex-gratia of Rs 2 lakh for kin of the labourers from Bihar killed by militants, and hoped that the administration would take all required measures to protect them. “Every citizen is free to go to any corner of the country for work,” he said. 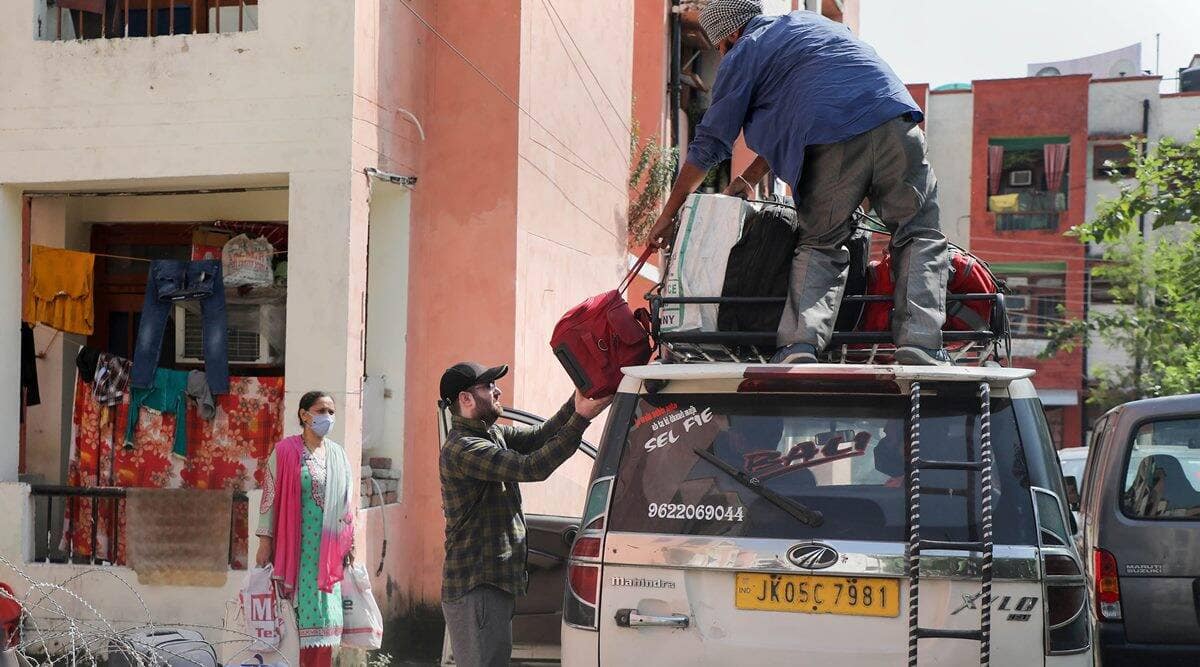 In Srinagar, labourers seeking to leave made a beeline for the Nowgam Railway Station. For the last train to leave for Banihal at 4.27 pm, Sonu Sahni sat with his eight brothers, with bundles carrying clothes, and a bag full of unsold pineapples, on the footpath outside from 2 pm.

From Badaun in Uttar Pradesh, Sahni, 34, and his brothers have been selling fruits or roasted groundnuts and grams (depending on the season) in Srinagar for nine years.

When militants targeted migrant labourers, especially in south Kashmir, after the abrogation of Article 370 in August 2019, the nine had returned home. But once their savings got over, they came back in March.

Hoping to be on a train to UP from Jammu by Tuesday, Sahni said: “Nothing is more important than life. A labourer is anyway a burden on Earth, now he has to face bullets too.”

Every year an estimated three-four lakh migrant workers arrive in the Valley, mostly from Bihar, Uttar Pradesh, Rajasthan and Punjab, working through the year and returning home during the winter. Compared to daily wages of around Rs 250 in Bihar, they say, they can earn up to Rs 500 in Kashmir. Skilled labourers like masons and carpenters earn Rs 600 to Rs 700 a day. Many, especially barbers and carpenters, stay put in the Valley for the entire year.

Read | After attacks, J&K to migrant staff: get to work or face action

A distraught Suraj Dev, getting into a vehicle headed to Jammu, said he had been coming to Kashmir for over 13 years. “I was here in 2016 (during the violence after the killing of Burhan Wani) and 2019 (after the abrogation of Article 370), I have worked in almost all parts of Kashmir, but I have not witnessed the fear I sense this time around,” he said.

From Paschim Champaran in Bihar, Suraj said he would not earn as much back home as he did in Kashmir. “(But) Nothing is more important than life. We will survive with whatever little we earn and whatever we have saved here.”

Mohammad Kafeel, 20, a mason who came from Sultanpur in Saharanpur, UP, for the first time just five months ago, is hoping to return to Kashmir soon. “Many people from back home have been coming here for years. I was enjoying my stay here, but then these killings started,” he said.

Kafeel wanted to brave it out. “But my family is worried. They have been calling me constantly and asking me to return.” One of those killed was a carpenter from Saharanpur.

“Why are they after us labourers?” Kafeel said. “We don’t understand politics. We are here only to earn a livelihood.”

Also Read | Vendor from Bihar, carpenter from UP gunned down

Arman Ansari, 20, and his four brothers, also masons, were on their way to their native village Ramnagar in Bettiah district of Bihar. Worried about finding work back home, Ansari said: “I was 10 when I first came here. I have never faced such a situation… If a local dies, there are bandhs which force the government to act. Who is going to call a strike for us? We are on our own.”

Jeetendra Mandal, 48, from Bhagalpur in Bihar, thought he had seen it all selling ice-cream since 2000. “I have been here when gunfire and blasts were so common we barely stirred when these happened. Things have improved vastly since then. Only in the past few days have I felt a bit unsafe.”

Wondering when he would return, Mandal added, “I can only hope those targeting us realise there is no glory in killing poor, defenceless people.”

Several migrants who have decided to wait and watch for now said returning home was not an option. Pankaj Kumar, from Gaya in Bihar, who has been coming to the Valley for more than a decade now, hoped it would be like 2019. “The situation improved very quickly then.”

In fact, not a single labourer leaving Srinagar said they had lost hope. Mohammed Hafeez, 52, from Kishanganj in Bihar, working as a salesman at a grocery store in Rajbagh area for 17 years, admitted it was rare for militants to attack “outsiders”. But, he added: “I did not go back at the peak of militancy and won’t do so now. This place has supported my children (he has six). The local people are nice and helpful. If a bullet has my name on it, it will get me anywhere.”

Kamlesh Chauhan, 27, from Siwan in Bihar, said he was used to leaving when things got bad, only to return, since he first began in Kashmir as a daily wager in 2017. “There is nothing to fear… I am sure things will settle down, I will come back.” He is the only earning hand in the six-member family apart from his father, who tills a small patch of land.

A significant number of labourers, including Lakha Singh from Gurdaspur in Punjab, said they were going back because of the onset of winters, and not because of the recent killings.

The Sahni brothers said Kashmiris remain the warmest of hosts and employers. “Our landlord tried to stop us and assured nothing would happen to us,” said Suraj Sahni. “He said leave your stuff behind and I will charge no rent, come back whenever you want.”

Terms of criticism of Candidate Kamala speak of entrenched stereotypes

‘Aim to wind up BPCL stake sale by June’