BJP general secretary in-charge of Bihar Bhupender Yadav's attack against Paswan came a day after he claimed in an interview with NDTV that he had discussed his plans to put up candidates against the JD(U) with both Home Minister Amit Shah and BJP president J P Nadda. 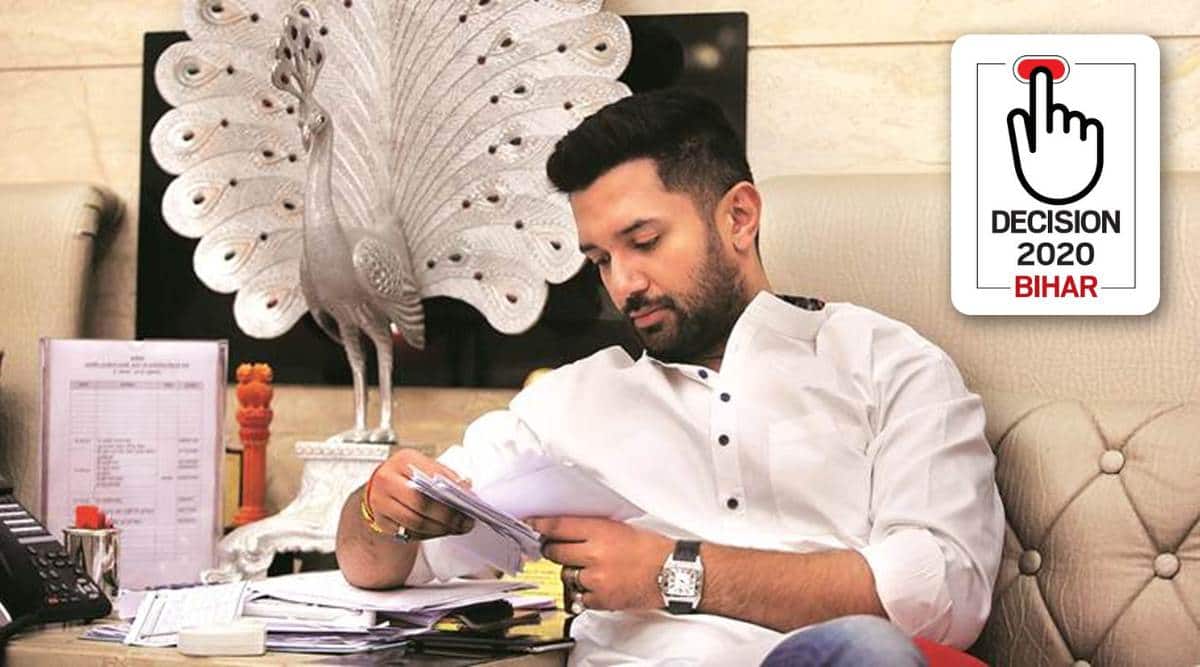 AS Lok Janshakti Party chief Chirag Paswan continues reiterating his admiration for Prime Minister Narendra Modi and his ties with the National Democratic Alliance at the Centre, even while attacking the JD(U) and Nitish Kumar, the BJP Friday stepped up its efforts to distance itself from him.

“Chirag Pawan wants to create confusion. In Bihar, the BJP, JD(U), VIP (Vikassheel Insaan Party) and HAM (Hindustani Awam Morcha) are in the NDA. We do not have any alliance with the LJP nor is it a part of the NDA. Chirag Paswan should not be confused nor spread confusion,” BJP general secretary in-charge of Bihar Bhupender Yadav tweeted.

Yadav called Paswan’s remarks on Nitish Kumar — who heads the NDA coalition in Bihar — “unfortunate.” “Chirag has contested Lok Sabha election in this coalition… In February, he was praising the Nitish Kumar government… Now he is indulging in politics of lies for his personal interests.”

Chirag Paswan Interview|  ‘I cannot be separate from the BJP, PM…Want to see a BJP-led LJP govt. JD(U) is on its way out’

The BJP also fielded Union minister Prakash Javadekar to take on Paswan. “We want to make it clear that we have no relations with the LJP and we do not like this politics of spreading confusion,” he told the media in Delhi. Saying the NDA would win three-fourth majority in the state, Javadekar said, “The LJP is nothing but a vote katua (vote eater), and is not going to make any impact.”

The BJP leaders’ attack against Paswan came a day after he claimed in an interview with NDTV that he had discussed his plans to put up candidates against the JD(U) with both Home Minister Amit Shah and BJP president J P Nadda. He said when he spoke to Shah about it, the latter was “silent”. Paswan had also challenged Kumar to contest the Assembly elections, asking why he had not participated in one since 2005 (Kumar is an MLC).

Bihar elections| Far ahead of rest, BJP vote share has surged since 2005

It has been suggested that the LJP has been attacking the JD(U) at the behest of the BJP, as the latter tries to emerge as the senior partner. A section of the BJP had wanted the LJP as a partner, given its 5 per cent support base, especially among the Dalits in the state.

Speaking to The Indian Express, BJP state president Sanjay Jaiswal denied any truck with the LJP, saying the BJP and JD(U) “enjoy warm ties” and have a “deep understanding”. Jaiswal also said the BJP would approach the Election Commission if the LJP used Modi’s name in the polls.

However, party sources admitted there is confusion among BJP workers over the exact nature of the ties with the LJP. Said a party leader: “His remarks will not only create confusion but also hurt our prospects.”

The JD(U) has made its displeasure evident and has been stressing that the BJP clarify the matter unambiguously.

The BJP had earlier expelled nine of its leaders who are contesting against NDA candidates, some on the LJP ticket. The LJP released its second list of 53 candidates on Friday. On five seats, the LJP and BJP will fight each other, and Chirag Paswan has said these would be “friendly contests” between the two parties.

Cable work over, but no footpath yet

Will bring in law to make public officials accountable to people: Rajasthan CM