Atul Rajani doesn’t speak about Congress manifesto for civic body polls but talks only about four candidates in Ward No. 2 and four votes. “I don’t need to tell voters what I want to do for them. They already know what I am capable of. There is no point in badmouthing BJP. I go to voters with good intentions,” Rajani tells The Indian Express. 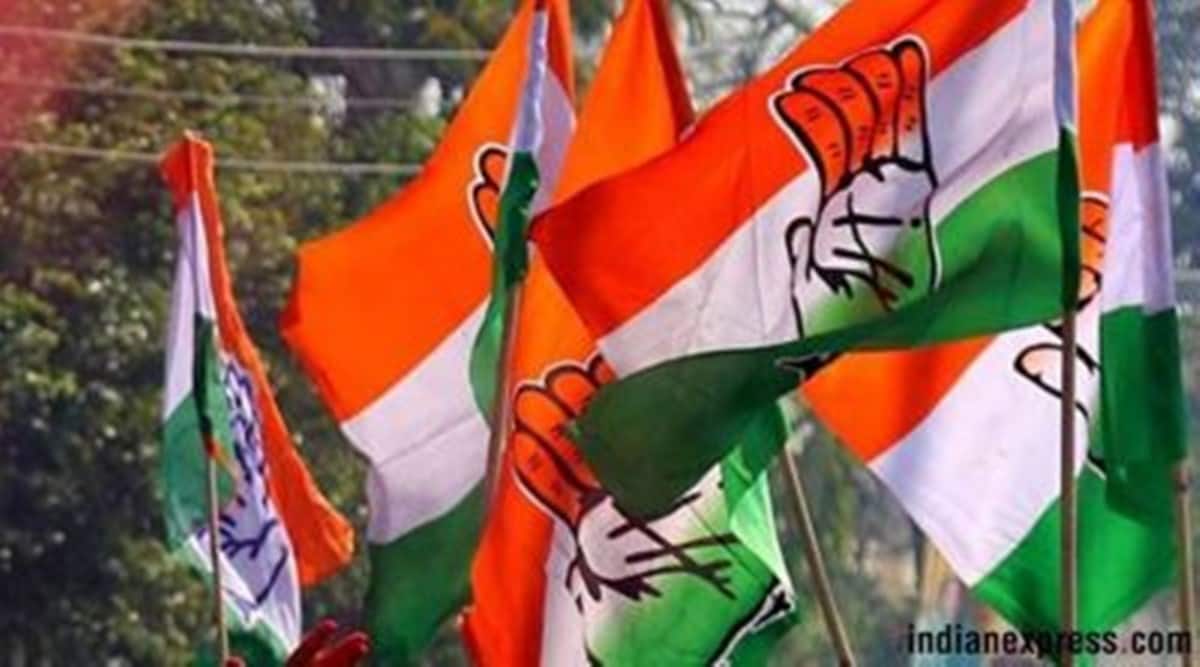 Bidding for a seat for the fourth consecutive time in the general board of Rajkot Municipal Corporation (RMC), Atul Rajani, Congress’ senior most corporator, has been campaigning door-to-door, stressing to voters that besides him, they should remember three other Congress candidates as well for the February 21 election. But he says he has no time to campaign for party candidates in other wards of the civic body.

Along with fellow Congress candidates Divyaba Jadeja, Nimisha Raval and Yunus Juneja, Rajani campaigned in the residential quarters for staff of civil hospital on Sunday afternoon. A young man, addressing Rajani as ‘sir’ led them from one quarter to another.

“Myself Atul Rajani. We all four candidates are here. Char mat Congress ne (please give all your four votes to Congress),” Rajani tells the staff, showing his palm, which, coincidentally is also the election symbol of Congress, and moves to the next quarter.

Carrying her four-year-old son Bhavyarajsinh in her arms, Divyaba struggles to keep pace with the rest of the candidates. In the neighbouring PWD quarters, Kumud Kariya tells Rajani that rainwater floods her quarters and that nobody listens to her complaints. “Let the election get over and I will do something,” Rajani tells her, adding his mobile number was there in the pamphlet handed out to her by Congess worker.

Another old woman confronts the Congress leader and complains about poor cleanliness. “Baa (mother), this colony is controlled by the PWD and not by the RMC. But let the election get over and we shall do something,” Rajani, 50, tells her.

Next, they stop in Bhomeshwar Plot and begin their campaign from hutments near Bhutnath Temple. Noticing many doors closed, Rajani asks Congress workers to place campaigning material at doorsteps.

As he was preparing to leave the slum, Poonam Kumbhar, 50, a casual labourer, stops Rajani. “You come every time to seek our votes… But what have you done for us? Look these potholes… and cleanliness…,” she tells the three-time sitting Congress corporator, pointing to cow dung scattered at the entrance of the colony.

“Sister, you know it well that I am just a phone call away. If you wish, I can send a JCB machine to clear the garbage. For the rest, let the election get over,” Rajani, the only Congress candidate who has won past three RMC elections and is seeking a fourth term, tells her.
Despite seemingly dissatisfied with the answer, Kumbhar, a casual labourer, says she would vote for the Congress candidate. “He responds to calls and visits us whenever we request him. I have always voted for Congress and would do the same this time also,” she says.

“There are three other candidates with me and please remember them also,” Rajani tells the man.

Outside her home, septuagenarian Chandrika Trivedi and her friend Harshida Rajyaguru welcome Rajani enthusiastically. “He is our 108 (referring to the emergency service),” says Trivedi as Congress worker starts introducing Rajani.

Rajyaguru told The Indian Express,” Rajani responds to our calls whenever there is waterlogging or any other problems in our locality.”
However, sitting outside her small house on the edge of the nullah on the other side of the Bhomeshwar Plot, Roshan Mandhra (50) doesn’t hide her disappointment when Rajani reaches there.

“You never came to enquire about us during lockdown. That was so painful period,” she tells the corporator.

“You would be aware that till now, I was corporator of Ward No.3 which does not include this area. I was doing whatever was possible there,” he says.

Harpalsinh Jadeja, Divyaba’s husband who is secretary of Gujarat state unit of Youth Congress, comes to his rescue. “Rajkot Congress was running the largest kitchen by our party in Saurashtra. We used to serve meals to thousands during lockdown,” he says.

Mandhra’s husband Hasam is an autorickshaw driver and their son Sarfaraz works as a watchman. “For weeks, neither of them had any work. We struggled to get even two square meals but no one cared for us,” Mandhra complains but adds, “Atulbhai is a good man and Congress would get our votes.” She adds that BJP has only given them price rise.

Throughout the evening, Rajani, who has studied till Class 10, doesn’t speak about Congress manifesto for civic body polls or Congress prospects this election but talks only about four candidates in Ward No 2 and four votes. “I don’t need to tell voters what I want to do for them. They already know what I am capable of. There is no point in badmouthing BJP. I go to voters with good intentions,” Rajani tells The Indian Express.

Despite his seniority, Rajani has not been able to join party campaign other wards. “I have shifted from Ward No.3 to Ward No.2 to strengthen the party here. As this is a new area for me, I need to focus here and that leaves little time to go capaign for party candidates in other wards,” he adds.

Six-month extension to complete update of NRC by June 30

I don’t see why you’ve to change it: Warner joins debate on saliva to shine ball