The most immediate challenge for growth is the disruption of the global economy brought about by the Ukraine war and related sanctions, the Covid shutdowns in China and the rising tide of inflation, points out Nitin Desai. 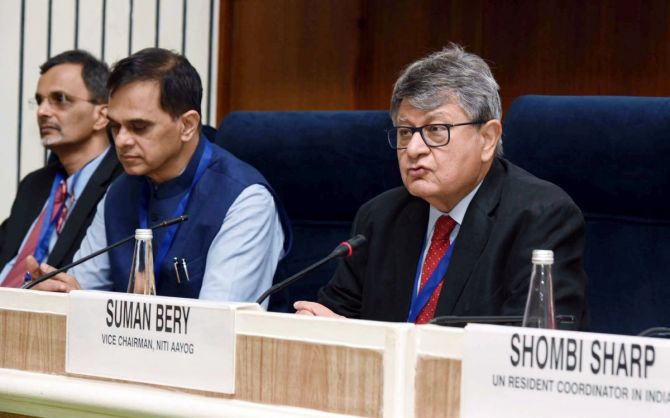 The NITI Aayog has a new vice-chairman, Suman Bery. This is welcome news, not just because he is a friend, but because he always seeks credible analysis and sound reasons for any proposed answer to economic challenges. Moreover, he is politically unbiased, a characteristic of great value in managing the NITI Aayog for cooperative federalism.

The word ‘niti‘ in Hindi means policy and one can say NITI Aayog is the Policy Commission of the Union government.

When it was set up in 2015, the late Arun Jaitley argued that the Planning Commission was designed for a top-down command economy and had to be replaced because ‘India is a diversified country, and its states are in various phases of economic development along with their own strengths and weaknesses. In this context, a ‘one-size-fits-all’ approach to economic planning is obsolete. It cannot make India competitive in today’s global economy.’

Has the NITI Aayog ensured a substantial shift to a bottom-up policy of engaging the state governments?

Were states consulted before Union government initiatives like the abortive attempt at agricultural marketing reform or the announcements of a plethora of direct benefit handouts?

Are these initiatives not ‘one-size-fits-all’ moves imposed from the top?

Frankly, the justification for the establishment of the NITI Aayog has been more or less disproved by the way development policies are being formulated in the present Union government regime.

Looking at the work of the NITI Aayog over the past seven years, it would appear that its role in development policy has been mainly that of a formulator of programmes to realise grand goals announced from above. Thus, the prime minister announced that agricultural incomes would be doubled by 2022-2023 and the NITI Aayog had to work out how this improbable target could be achieved.

A visit to the NITI Aayog Web site and the list of reports and papers it has prepared show that it focuses mainly on sectoral issues rather than on the overall development strategy.

One indicator of this is that it seems to have retained the old Planning Commission’s sectoral divisions but wound up the large and influential perspective planning division and finance division into a relatively small economics and finance division, which seems to focus more on monitoring than on developing growth or equity or sustainability strategies.

Actually, there is little by way of an articulated medium or long-term strategy, unless one wants to count the prime minister’s announced goal of a $5 trillion economy by 2024-2025 as a one-sentence version of that! Most policy initiatives seem to be shaped by immediate sectoral compulsions and political impact and lack a long-term perspective.

The public hoardings and other publicity measures that associate virtually every governmental activity with the image of the prime minister (as in the Covid vaccine certificates) reinforces the perception that the formulation of development policy is now top-down not just with the Union government imposing its vision but with the head of the Union government playing that role.

The real problem of strategy formation for development is that it is not being done. The NITI Aayog has produced some vision documents; but they are not agreed strategies formulated after widespread consultations with experts and discussion with the states.

The word ‘niti’ in the name of this organisation is an abbreviation for National Institution for Transforming India. This task requires looking a level above the designing of programmes to a strategy from which programmes must be derived.

A grand strategy for development must spell out the opportunities and threats faced by the key objectives of development which are growth, equity and sustainability.

It must then identify the changes in the role of the public and private sector, shifts in global economic alliances and policy shifts that are required to maximise benefits from opportunities and manage risks from threats.

The time frame for a grand strategy has to be long-term but the more specific strategies derived from it must take into account short and medium-term challenges that the country faces.

The most immediate challenge for growth is the disruption of the global economy brought about by the Ukraine war and related sanctions, the Covid shutdowns in China and the rising tide of inflation.

Looking beyond the immediate future, we need a strategy to grow rapidly in a global economy in which competitive advantages will be shaped by machine learning, artificial intelligence, biotechnology, decarbonisation of production and other new developments.

Some of these are not just a threat but even an opportunity for India which, with a well-designed strategy, can become a lead player. A grand strategy that does this can then be the basis for more specific strategies for infrastructure, technology development, educational quality, and skill formation and so on.

The goal of equity in growth is a more difficult challenge.

It has been served largely by schemes that provide direct benefits to poorer households and individuals in the form of public works employment, cash transfers, essential goods and health insurance.

They now add up to about 3 per cent of gross domestic product and reach about three-quarters of the population.

This is but a safety net to cover the failure to design and implement an employment generation and skill development strategy that would allow the disadvantaged to earn enough to raise their living standards in a market environment.

That is the core equity strategy that we require with more strategically organised public support for education, health care and social security.

Yet another dimension for the goal of equity is the need to reduce inequality in the pace of development between the northern and eastern states and the southern, western and north-western states.

The third high level goal of sustainability is an even bigger challenge.

One component of this, climate change, has received some systematic attention, and long-term goals have been announced.

The elaboration of these into a strategy affects the work of practically all ministries and all states and hence this should be the responsibility of the NITI Aayog.

But for the goal of sustainability, it is essential that the mitigation of greenhouse gas emissions should be combined with adaptation to the unavoidable temperature increase and resilience to cope with rising climate and weather uncertainty.

This integration is particularly important in agriculture, urban planning, and infrastructure development. A grand strategy for sustainability must look beyond just climate change to the broader challenge of environmental conservation in a rapidly changing production and consumption environment.

These challenges, described above in summary form, must be elaborated.

The new vice-chairman, Suman Bery, must bring in the talent required and launch a process of broad-based consultation, particularly with the states, to secure a broad national consensus on a long-term growth strategy.

Specific programmes must be based on the implementation of this strategy.

‘Big Little Lies’ author has new novel out in September

The diet to help you sleep better