There is considerable concern over the fate of three iconic heritage buildings on Janpath — the National Museum, the Indira Gandhi National Centre for the Arts (IGNCA) and the National Archives — all of which are in the wider Central Vista redevelopment zone. 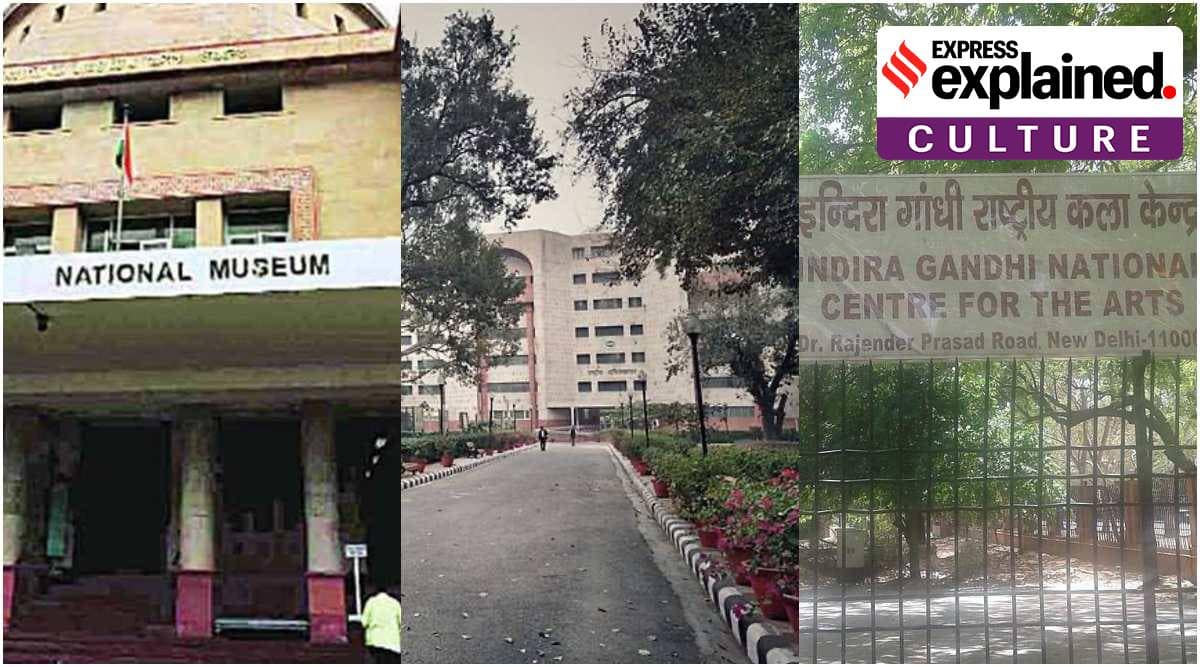 As the Central Vista project progresses, the focus has been on Rajpath, the area around Raisina Hill, and the upcoming new Parliament building.

There is considerable concern, however, over the fate of three iconic heritage buildings on Janpath — the National Museum, the Indira Gandhi National Centre for the Arts (IGNCA) and the National Archives — all of which are in the wider Central Vista redevelopment zone.

What is in these buildings, all of which are of great cultural, historical, and educational importance? What happens to them in the redesigned Central Vista?

Union Minister for Housing and Urban Affairs Hardeep Singh Puri has said that “no heritage building will be demolished for the project”, and that the main National Archives of India building on Janpath would not be touched at any point.

However, as per the design of the redeveloped Central Vista, the annexe building will be demolished to make way for offices.

According to the website of the National Archives of India, the genesis of the institution may be traced back to 1860, when H D Sandeman, then the Officiating Civil Auditor of the Raj, “stressed the need…to transfer…all valuable records to a ‘Grand Central Archive’”.

In 1889, Prof G W Forrest of Elphinstone College, Bombay was asked to examine the records of the Foreign Department of the Government of India.

Forrest made a strong plea for transferring all records of the administration of East India Company to a Central Repository.

Subsequently, on March 11, 1891, the Imperial Records Department (IRD) opened in the Imperial Secretariat Building in Calcutta, then the capital of British India.

The building was designed to be one of the four museum and archive buildings that had been planned by Edwin Lutyens around ‘Point B’ in the plan of New Delhi, at the intersection of King’s Way and Queen’s Way (now Rajpath and Janpath respectively).

The archival records kept here include 45 lakh files, 25,000 rare manuscripts, more than 1 lakh maps and many significant documents from the Mughal period.

The IGNCA complex buildings will be demolished to make way for government offices, while the IGNCA will get a new address at Jamnagar House on the India Gate circle.

Architect and planner Bimal Patel, whose firm HCP Design has been awarded the contract to redevelop Central Vista, had said a few months ago that IGNCA would be shifted to a 15-acre space in Jamnagar House, which has some hutments currently.

It was inaugurated in November 1985 by then Prime Minister Rajiv Gandhi, in the memory of his mother and late Prime Minister Indira Gandhi, as a centre for the study and experience of all the arts.

Puri has said that until the new building is ready, all artefacts and antiquities currently housed at IGNCA would be moved to Hotel Janpath.

He has said that the aim behind moving IGNCA to a new location is to create “a world-class facility comparable to those in Sydney and New York, which is not possible at its current location”.

The hotel, which will be the IGNCA’s temporary address, has been redone to store and exhibit the artefacts, manuscripts and other valuable items that the IGNCA possesses.

Even as there is no word on what happens to the National Museum building once it moves to its new location at the expansive North and South Block buildings perhaps five years from now, the museum is currently undergoing a massive overhaul.

“We are looking to enhance the visitor experience at the museum when it reopens later this year, once Covid-19 restrictions are over,” Raghvendra Singh, Secretary, Ministry of Culture, who is also the Chief Executive Officer, Development of Museums and Cultural Spaces, said.

As per the Central Vista plan, several new government buildings will have to be built before the Ministry offices currently operating from North and South Block can move out. It is only after these buildings are vacated that they can be retrofitted to suit museum displays.

Interestingly, the museum was originally housed inside Rashtrapati Bhawan, and inaugurated on August 15, 1949. The foundation of the present building was laid by Jawaharlal Nehru, the first Prime Minister of India, on May 12, 1955. The first phase of the present building was inaugurated by S Radhakrishnan, then Vice President of India, on December 18, 1960. The second phase was completed only in 1989.

Kangana: Only 3-4% pay taxes and others are dependent on them