Many of the stories, the pictures going out of India worldwide lately with these provocative processions, taunting of Muslims, bulldozers targeting mostly their properties, the sweeping ‘othering’ of a community of 200 million are painting the front pages and TV screens in the democratic world.
That is where most of the friends we covet lie.
Soon enough, these will also make our vital friends among the Muslim nations, from Bangladesh to Saudi Arabia and the UAE, uneasy.
The best time for course correction is now, asserts Shekhar Gupta.

External Affairs Minister S Jaishankar has wowed people back home with his sharp response to criticism over two issues: India’s enhanced purchase of oil from Russia and the human rights situation here.

To the first, he responded substantively, reminding the questioner at his joint press conference after the 2+2 meeting that Europe imported from Russia in one afternoon what India did in a month. So look, who’s talking. Brilliant.

To the second, his somewhat belated counter was pure rhetoric and it’s no surprise that has cheered the fans at home even more.

US Secretary of State Antony J Blinken made a somewhat gratuitous reference to the US concern over the human rights situation in India.

Decades of diplomatic training restrained Dr Jaishankar from responding instantly as an event meant to showcase strategic solidarity and warmth, would have yielded the most incorrect headline possible.

But he responded subsequently, saying the human rights issue wasn’t discussed at the talks. 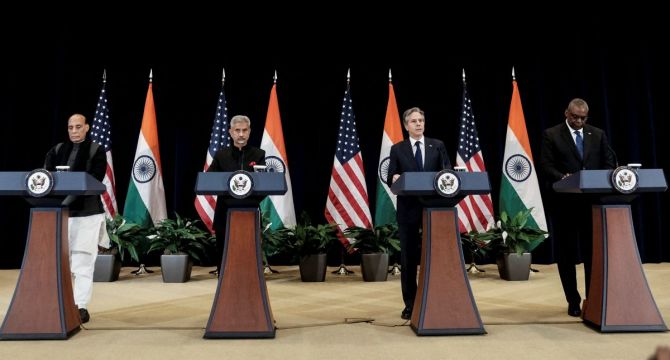 To get even, he added that India too sometimes had concern about the human rights situation in the US.

This was particularly so when it affected people of Indian origin.

Predictably, this evoked that heady ‘Dekha, Amreeka ko suna diya (see, how he told off the Americans)’ response back home.

Finally, India has a minister with this incredible confidence.

All of that is fine, but is that the point?

Is international diplomacy at the highest level to be seen as a television debate, if a civilised one?

It is also true that whenever people of Indian origin are targeted in the US, as the Sikhs in the recent past, India has spoken up.

But this line of attack as India’s defence and the breathless excitement it has generated misses the central point.

First of all, this was a conversation between friends.

And friendship in international relations involves some criticism of each other unless, of course, you are Pakistan, Russia or the entire OIC to China.

India and the US have argued for decades.

In the early fifties Nehru lectured Eisenhower on China, Korea, and Communism.

Even when Rajiv Gandhi met Ronald Reagan on his early ‘honeymoon’ phase visits to Washington, the post-summit briefings included a delightful sidelight.

Rajiv, it was said, picked a couple of roasted almonds from the table and said how much he liked them.

These are from my state California, Reagan said.

When do you think we will be able to sell these in your country? That argument is still not fully settled.

From human rights to trade, sanctions to Afghanistan, India and the US have disagreed even in this, the epoch of their strategic partnership which began evolving post-Kargil.

Until about a decade back they’ve fought over the continued US arming of Pakistan, notably when the consignment of AMRAAM air-to-air missiles for PAF F-16s was delivered in 2010.

Or more recently over India’s purchase of the Russian S-400s.

But friends also know how to deal with differences.

The human rights issue has been a thorn in India’s relations with the West for a little over three decades now, say, since 1991, when insurgency first broke out in Kashmir.

P V Narasimha Rao’s government dealt with it with an iron fist, as it did at the same time with terror in Punjab.

In the early glow of the victory in the Cold War, it also hit home with their governments.

India’s global political capital was then not a fraction of what it is now. Rao therefore responded firmly, but tactfully as one like him would.

He answered the criticism aggressively: We are a democracy, we have a free media and activists.

Then he defeated the Pakistan-sponsored and (West-backed) resolution on human rights against India.

But he also lifted the ban imposed earlier by governor Jagmohan on the foreign press visiting Kashmir, and set up the National Human Rights Commission under Justice Ranganath Misra.

Why do we need foreign human rights organisations here when we have our own?

The picture is very different now. But if the Americans, friends rather than hostile as they were in the early 1990s, particularly Bill Clinton’s first presidency, are needling India over human rights, they aren’t talking about Kashmir or Punjab.

Those two issues are seen as settled, including the change in the Constitutional status of Kashmir.

They are talking instead about the treatment of India’s minorities, especially Muslims, though Christians feature in the US thought process too, activists, and the Modi government critics.

The large Muslim minority, by and large, votes for the Democrats in the US.

Also, the ‘progressive’ group within the party is strongly committed to Muslim voters, and interests.

We could therefore translate his responses as we know where you are coming from. But surely, you do not want the ‘Squad’ to undermine the Quad?

But is our larger national interest, the stature of our nation, the respect in which it is held globally, its moral authority, all going to be determined by debating points?

Now, you might point out to me a contradiction in my own views.

Because just weeks back I had argued that self-interest, not morality, determined serious nations’ strategic policy.

It isn’t contradictory because it is the BJP, its prime minister and government, and ideological guru, the RSS, which see India rise as the ‘Vishwaguru’, the teacher to the world, as the Buddha and Lord Krishna might have been in ancient times and Swami Vivekananda and Sri Aurobindo more recently.

It is we who so covet sermonising rights to the world.

Our pitch is, learn from us how the most diverse large population in the world lives in harmony in a robust democracy.

We claim lecturing rights on democracy (we are the oldest. Google Vaishali, you silly Westerners), diversity (did we slaughter our tribals like your native Americans?), and equality (when did we have slavery and that’s too based on race?).

Does our present conform to that brilliant tradition?

Can we aspire to that moral stature if we respond to all criticism with this prickly whataboutery?

Of course, the partisan would cheer.

But that doesn’t mean we lose the ability to look within. Or stop listening to friends.

Many of the stories, the pictures going out of India worldwide lately with these provocative processions, taunting of Muslims, bulldozers targeting mostly their properties, the sweeping ‘othering’ of a community of 200 million are painting the front pages and TV screens in the democratic world.

That is where most of the friends we covet lie.

Soon enough, as happened following the CAA-NRC campaign and the violence, these will also make our vital friends among the Muslim nations, from Bangladesh to Saudi Arabia and the UAE, uneasy.

The best time for course correction is now.

Postscript: You can always trust Indian diplomats to outsmart just anybody in an argument, especially in the English language.

In 1985, Mani Shankar Aiyar was in a delegation in Washington, negotiating an agreement on dual-use technology transfers.

The Americans changed a particular word.

When the Indian side objected, an American said in part-jest that his colleague who made the change had been to Harvard, so he must be right.

Mani said you see he went to Cambridge ‘mass’ (play on Mass. or Massachusetts).

But I went to Cambridge ‘elite’. So, what I say on the English language must be right. The Americans conceded the point.

By Special Arrangement with The Print

What Bombay will miss of Britannia’s Boman