Accusations, counter-accusations, TV reporters as referees and a whodunit in Kolkata 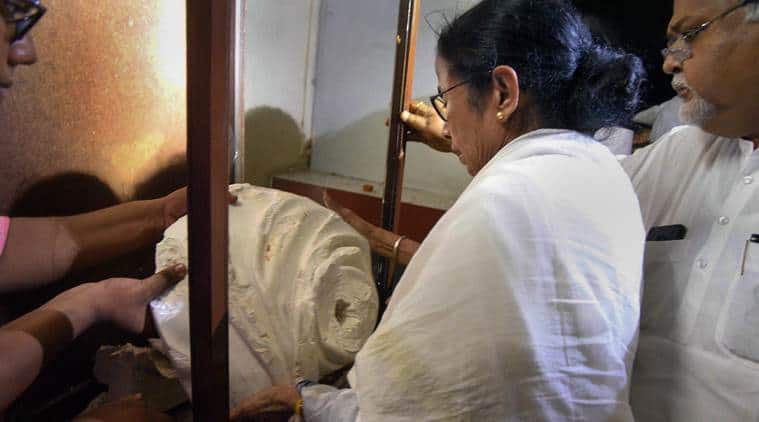 The wags in Kolkata say that just as no one killed Jessica Lal, no one smashed Ishwar Chandra Vidyasagar’s bust either. The bust saw the state of affairs in the country and the state, had a dizzy spell, fell off the pedestal and just went to pieces. Begusarai was the most keenly watched constituency in this election, and the arrival of the entertainment stars of the liberal firmament had made it the happy hunting grounds of TV crews.

But the hot zone of the elections is West Bengal, where chief minister Mamata Banerjee has staked herself out as the brand opposing the Prime Minister’s. The state has been crawling with TV cameras ever since the aircraft of BJP leaders was prevented from landing in the state, but they were largely absent when the face-off reached its crescendo in Kolkata’s Vidyasagar College, where the bust of one of the institution’s founders, Ishwar Chandra Vidyasagar, was vandalised in a violent confrontation involving brickbatting and arson. A long series of televised accusations and counter-accusations followed, in which TV reporters cast themselves in the role of referee. For instance, interviewing BJP president Amit Shah, the outspoken Anjana Om Kashyap only pointed out that the Trinamool Congress had a different version of the story. She was not alone in this he-said-she-said game of political ping-pong.

The reporter’s job is to discover the truth, which is not difficult if TV cameras are on the scene. But even if they are absent, there is a camera in the pocket of every bystander. Even traffic accidents are not allowed to go unimmortalised by bystanders who are busy filming, instead of helping the injured. In Vidyasagar College, too, several bystanders and interested parties produced videos of the violence and arson. And Alt News has assembled them into a timeline that leaves very little doubt about the course of events. If they are subjected to the usual forensics, the debate would be over. Like there is no debate about the arrest of a BJP youth worker in West Bengal for a harmless satirical social media post. Charges were filed out of habit. A bad habit that Mamata Banerjee has nurtured for far too long.

Politically, it does not matter who desecrated the bust. The desecration alone, in the course of a BJP rally, will matter to voters in the nine seats that go to the polls tomorrow in West Bengal. Vidyasagar and the college named for him were at the forefront of a movement for modern education in the 19th century. Its academic record is now indifferent, but its alumni include Ram Manohar Lohia, Keshub Chunder Sen and Swami Vivekananda. TMC spokesperson Derek O’Brien — not entirely a typical Bengali — was extremely emotional in his press conference following the incident, where he had brought copies of Barna Parichay, the alphabet primer written by Vidyasagar. Over 150 years later, it is still the first book that a Bengali child reads, and the woodcut of Vidyasagar’s bust on the cover is seared into the race memory. It is a race that venerates learning and, despite Amit Shah’s earlier claims to the contrary, Saraswati Puja is an annual event in every home — even the homes of atheists. It is imprudent to desecrate gods, whether religious or secular.

But the real loser in this election, it is generally agreed, is the Election Commission. Institutions stand or fall on public perceptions, and the perception of the EC’s behaviour as partisan has become widespread. Following the incident in Kolkata, the watchdog has used its extraordinary powers to truncate the campaigning schedule in West Bengal — which has invited accusations of favouring the prime minister — and to transfer key officials in the administration and the police. This assertiveness, following a period of helplessness, must invite adverse reactions.

Some poll controversies have been caught squarely on camera and yet escaped national attention. For instance, the Opposition was on dharna in Domariyaganj after preventing an attempt to remove electronic voting machines using a pickup without number plates on May 14. Go News has a long clip showing an administration official who was involved, and there are allegations of an attempt to switch machines, but the incident has hardly been followed up by TV news. On the contrary, there is much excitement about a random guy who trolled Congress spokesperson Pawan Khera’s briefing by shouting that reducing Yogi Adityanath to Ajay Singh Bisht is an insult to Indian culture. Why is this even news?

The currency turmoil in Turkey